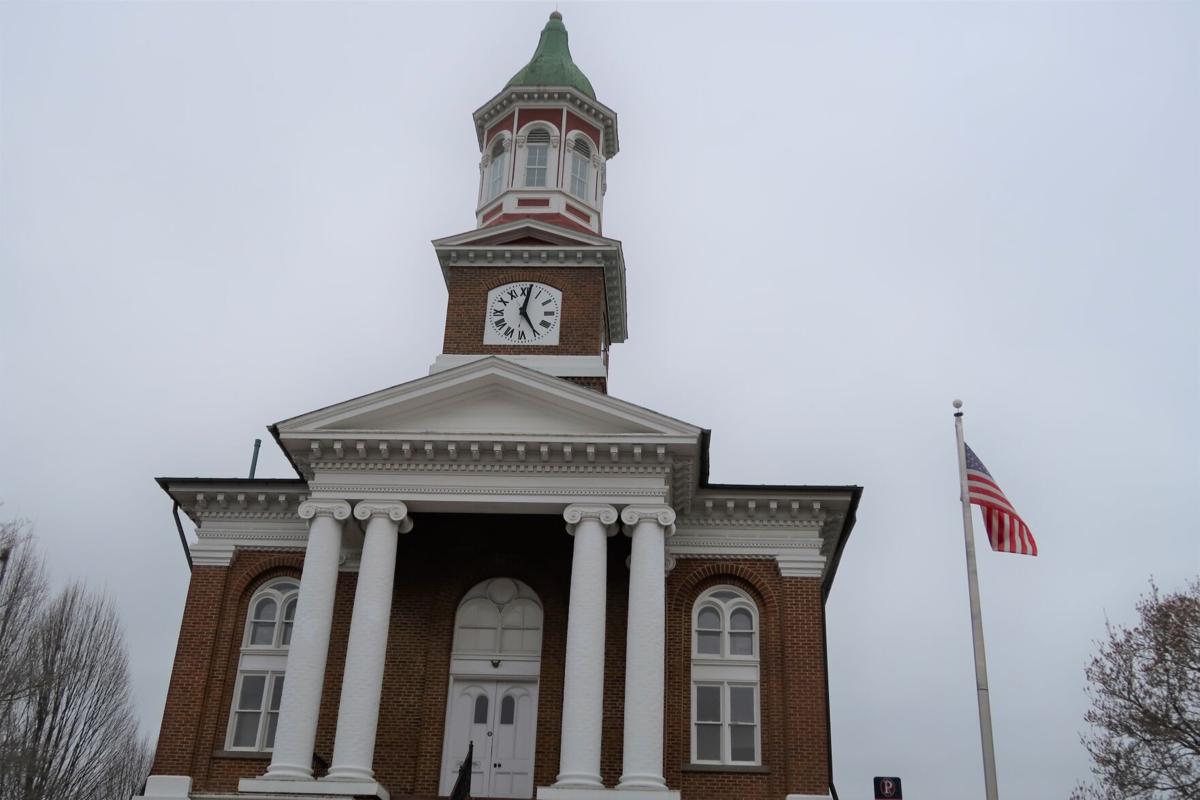 The Culpeper County Courthouse, which is where either Marshall Keene or Carson Beard will report to work as the circuit court clerk after the March 30 special election. 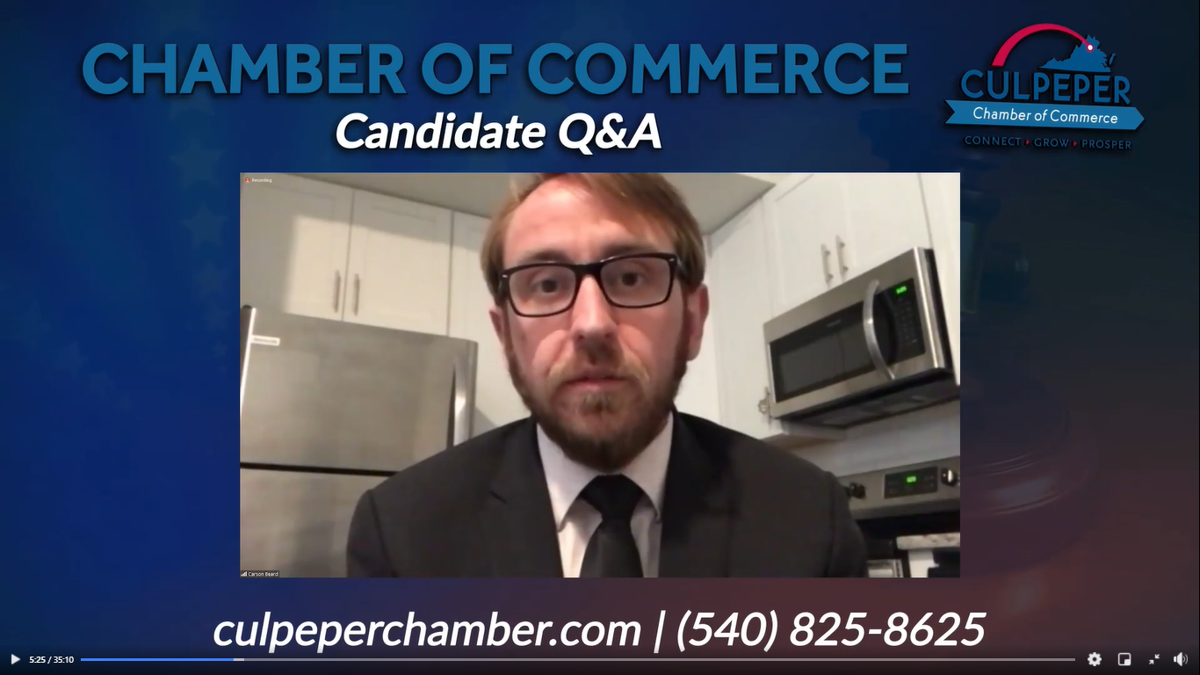 A screenshot of Carson Beard during the virtual Q&A. 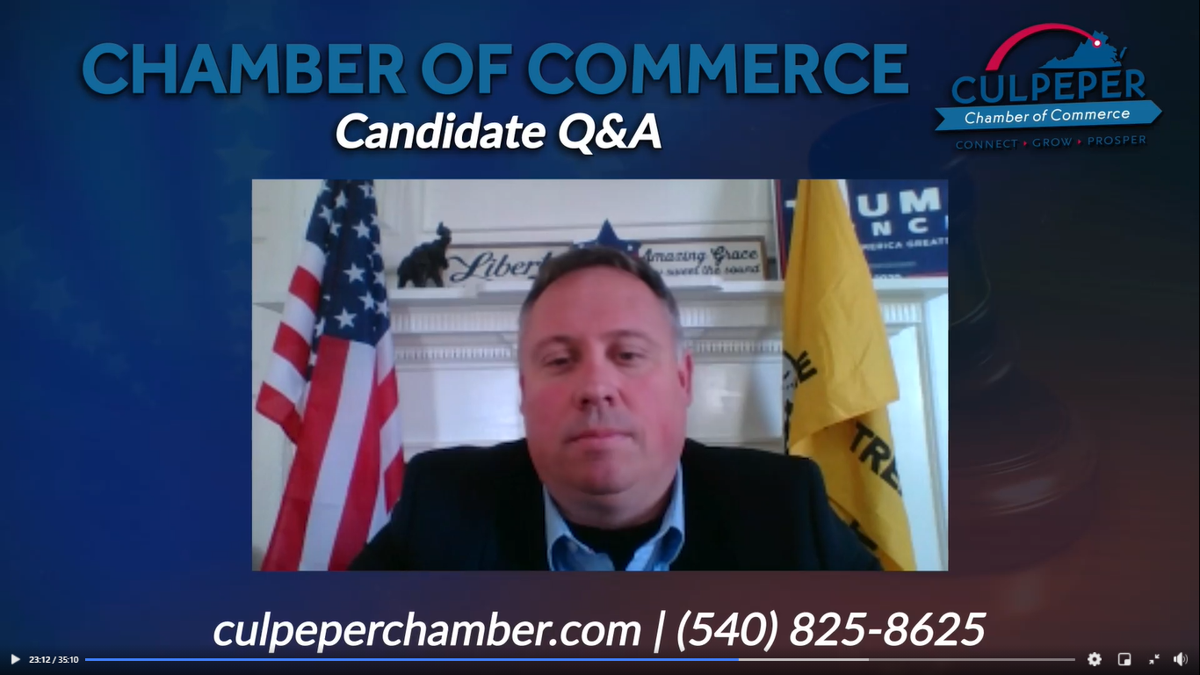 A screenshot of Keene during the virtual Q&A.

The clerk’s seat is up for grabs in a March 30 special election and the winner will fill the three-plus years remaining on retired Clerk Janice Corbin’s term. As of March 23, Registrar James Clements reported that 1,245 early votes were cast in the registrar's office. Additionally, 594 ballots have been mailed in and 292 ballots had been mailed out and not returned.

Beard has worked in the clerk's office since 2014 and currently serves as interim clerk. He is running as an independent.

Keene is a sheriff’s office investigator, business owner and chairman of the local GOP committee and school board. He is running as a Republican.

Originally, the candidates were supposed to be present for a March 11 forum at Germanna Community College, but it was delayed to March 15 because Keene had a scheduling conflict. Six hours before the rescheduled forum was set to occur, it was canceled again due to what the chamber described as "unforeseen circumstances." The chamber did not describe the nature of those circumstances and they remain publicly unknown.

Later in the day on March 15, the chamber announced that the format had been altered to a pre-recorded format in which Beard and Keene would answer questions in a one-on-one Zoom call with Say.

How would you define the role of the clerk of the court and what are the most common ways the public is served by the position?

Beard answered that the clerk’s role is to “receive, maintain and preserve the record” as “we are keepers of the record” for a “court of record.” He explained the court oversees land records, marriage licenses, concealed handgun permits, probate, wills and civil and criminal cases.

“I think it’s important to realize that pretty much everything that the clerk of court does is governed either by the Code of Virginia or the court itself,” Beard said.

Nearly the first 20 seconds of Keene’s response could not be heard due to technical glitches.

Keene noted that the clerk is one of five constitutional officers in Culpeper “and it’s important to know where those elected officials stand on important issues to the citizens.” He explained that now is the most important time to take a political stand as the state and country are at more risk than ever.

“There’s no doubt where I stand on the 1st and 2nd amendment...What do you actually know about my opponent? What are his core beliefs? What stands in our community have you seen from him,” he asked.

What qualifications set you apart for the clerk of the court position?

Keene said he has held leadership roles in the Marine Corps, law enforcement, local government and community organizations and the chosen candidate should have a track record of proven leadership skills.

“There’s more to managing the constitutional office than being likable. It requires leadership experience and most importantly life experiences. These are experiences that I believe my opponent does not quite possess yet,” he said.

Beard explained that he started working in the clerk’s office in 2014 after graduating from James Madison University with a justice degree, was promoted to chief deputy and has been serving as interim clerk since Corbin's retirement.

“I think without that experience, I don’t see how someone could come in and run an office of that magnitude without any experience,” he said.

What are some of the fees the public could be charged when visiting the office and, if elected, are there any you would change?

Beard said the only fee he would change is adding a 4% fee or $2 flat rate for credit card transactions. He noted that concealed handgun permits cost $50. Of that, he said the state code mandates $10 go to the clerk's office. Additionally, $5 goes to state police and $35 to the sheriff's office.

“To lower that, one of those agencies would have to waive their fee,” he said.

Keene said several fees need to be evaluated. Regarding concealed carried permit fees, he said he would “do everything I can to eliminate the clerk’s portion of that fee.” He added that “there will be no such thing of holding permit applications until the 45-day deadline.”

“Further, for those who may need an expedited permit, my door will always be open,” he said.

If elected, what are your goals for the office?

Keene said his first order of business would be placing “In God we trust” on all stationery and signage. In addition to modernization of the office, he said fiscal responsibility is important along with supporting the 2nd amendment. The most important goal, he said, is ensuring the office is accessible to all citizens.

Beard said modernization is vitally important as new technology such as e-filing allows the office to better serve the public. Even with modernization, he noted that the office would provide traditional access options. Regarding customer service, Beard said he hopes to continue the outstanding public service established by Corbin.

Courtesy of Culpeper Media Network, watch the Q&A below:

A mix of clouds and sun early followed by cloudy skies this afternoon. High 62F. Winds light and variable.

Intervals of clouds and sunshine. High around 65F. Winds light and variable.