Skip to main content
You have permission to edit this article.
Edit
News
Events
Obituaries
E-Edition
Columnists
Jobs
Marketplace
Legal Notices
Faces
Businesses You Should Know
Search
Share This
1 of 2 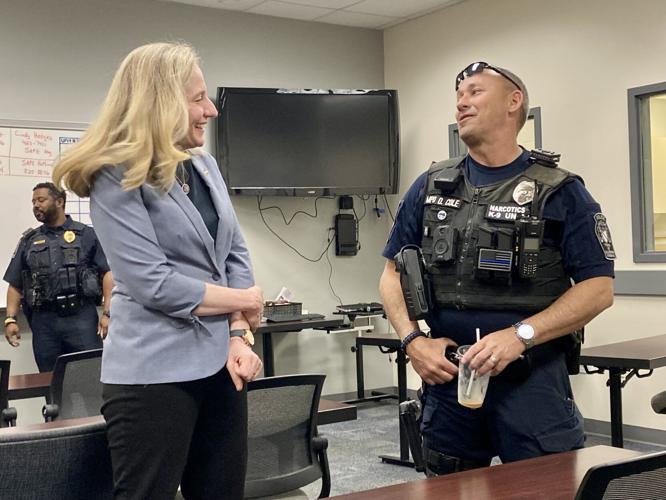 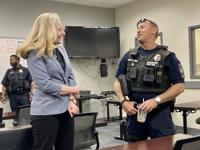 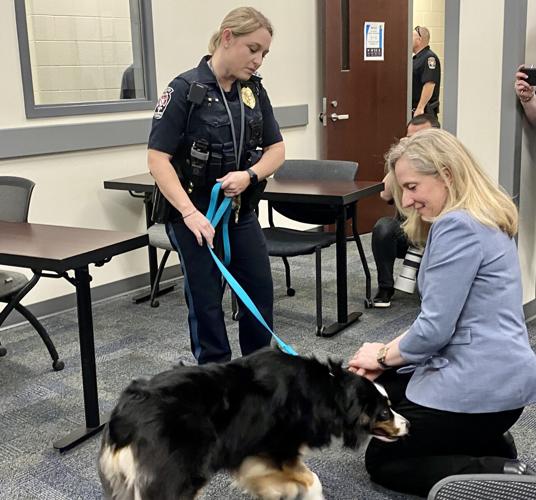 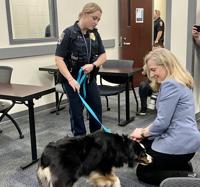 “The department’s been very helpful in giving us a law enforcement perspective on some of the challenges that you all have been facing on the ground,” Spanberger said.

The Community Oriented Policing Services (COPS) on the Beat Program Reauthorization and Parity Act would increase funding for police departments, help raise officer wages and assist with hiring by reauthorizing the COPS on the Beat Grant Program for the next 10 years and nearly triple its funding.

Spanberger sat in on the department’s morning roll call where she then spoke about her respect for law enforcement as well as being a resource for the department in accomplishing feats at the federal level.

In 2019, Lt. Brittany Jenkins, Sergeant Norma McGuckin and Sergeant Andy Berry attended the Professional Leadership Academy, which sparked a passion in creating a mental health resource for their fellow officers. The group with the guidance of Chief Chris Jenkins created the Culpeper Police Department’s Peer Support Team, which is composed of a group of eight officers and Gracie.

As a former federal law enforcement officer, Spanberger said she wasn’t surprised about what she heard and saw throughout her time with the officers, but said she did find the complexity of their body cameras interesting.

Besides salary and benefits, the department’s largest annual expense is its body camera technology and storage of data, Settle explained.

"It's every dollar well spent," he continued.

The cameras, produced by international police technology firm Axon, operate via WiFi, which is connected to a hotspot outfitted in every squad car. While cameras can be manually turned on by the officer, Settle continued, the cameras also turn on if the overhead lights or Taser are engaged and if the squad goes above a certain speed.

Upon approaching a scene, Settle continued, part of protocol includes officers alerting subjects they are being video and audio recorded, in turn anything they do or say can be held against them in court.

“I hadn't thought about or have never had anybody talk about the value of verbalizing to people, 'You're on camera. I'm recording this,'" Spanberger said.

As the tour continued, Spanberger met one of the department’s co-responders, John Bankas.

Co-responders are employees of Rappahannock Rapidan Community Services who are embedded with police to de-escalate scenes with clients in crisis. Responders also provide resources for further help and follow-ups.

Bankas works with the area’s homeless population to parents struggling to raise their children.

“Thank you for the work you do,” Spanberger said.

Both Settle and Bankas drove home the need for more availability of inpatient facility beds for patients in crisis.

"The lack of beds is creating an environment where they're not safe to go home, they're not safe to be on the streets, the state mental health system doesn't have a bed for them, so the only alternative we have is jail," Settle said. "It's a sad situation."

"We're making our communities less safe by putting these people who need services back in the community because there's a lack of beds."

Before visiting Davis Street boutique Green Roost to discuss the impact of the Paycheck Protection Program, Spanberger went on a ride-along where she learned more about the hurdles Culpeper’s officers face on the streets.

"I think the department is doing a lot of really amazing things focused on mental health, not just in the community, but also for officers,” she said.

Nowhere on Abigail Spangerger's campaign website launch page can you find the word 'Democrat'. Abigail, if you are indeed a proud Democrat then why hide it? The voters know why.

No thanks, as a taxpayer I'm sick of eating turdburgers.