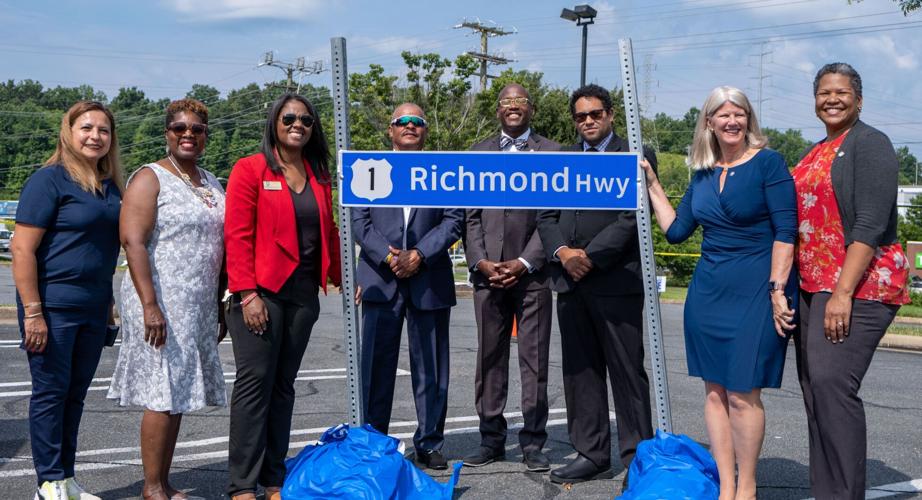 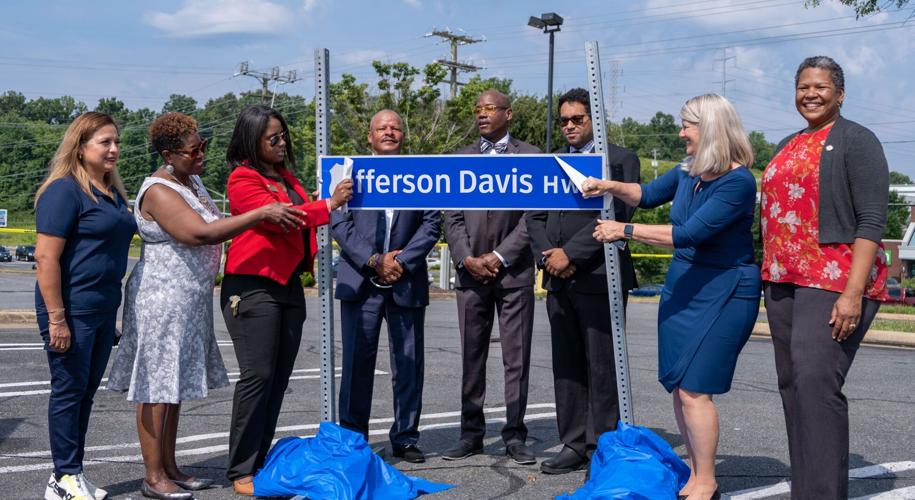 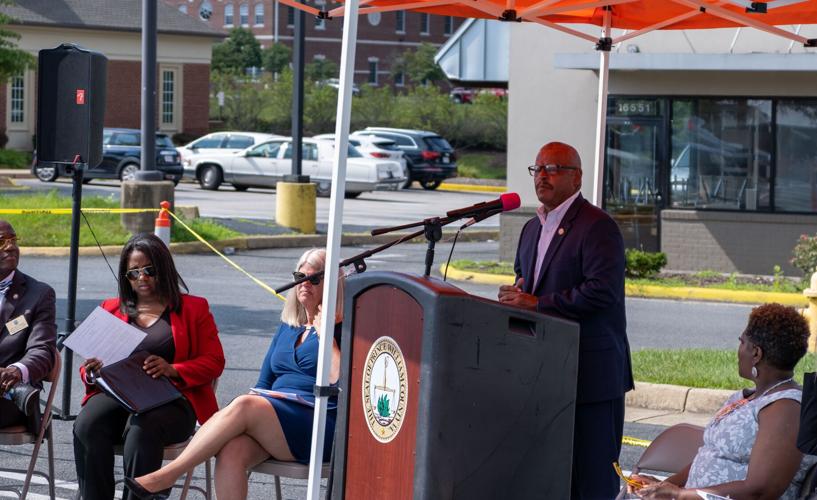 Del. Luke Torian, 52nd District, was among the various elected officials on hand for the ceremony marking the renaming of U.S. 1 from Jefferson Davis Highway to Richmond Highway. 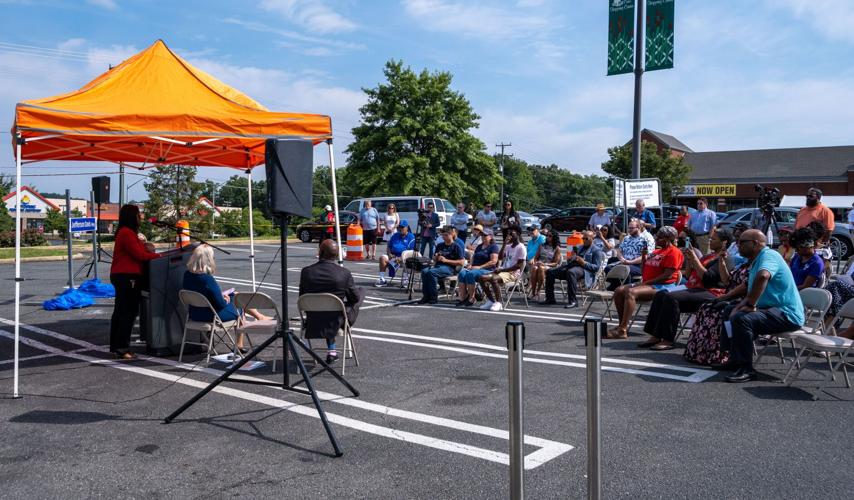 A ceremony marking the renaming of U.S. 1 in Prince William County from Jefferson Davis Highway to Richmond Highway was held July 16 at River Oaks Shopping Center in Woodbridge.

A heavily trafficked highway in Prince William County has a new moniker.

County supervisors and state leaders gathered Saturday to unveil the sign for the newly renamed Richmond Highway. The celebration was part of the county’s effort to rename U.S. 1, which officially changed from Jefferson Davis Highway to Richmond Highway on July 1.

“We name roads and buildings after people to honor them. And this road, any road, should never be named Jefferson Davis Highway,” said county Chair Ann Wheeler, standing on the hot pavement of the River Oaks Shopping Center in Woodbridge.

Wheeler spoke of the process of renaming the road, which began two years ago when Woodbridge District Supervisor Margaret Franklin brought it before the Board of County Supervisors.

“Removing Jefferson Davis’ name as the main road in this community was a personal goal of mine,” Franklin said during the ceremony.

Franklin, along with Potomac District Supervisor Andrea Bailey, spearheaded the effort, coordinating with the state, county and business owners who are impacted by the shift.

“We had an audience with the General Assembly to explain why this was important, and after that, we brought it to the board, who was unanimously behind it,” Bailey said after the ceremony.

The name change is part of a larger effort to rename the road throughout Northern Virginia. Alexandria and Arlington counties renamed the road in 2019, also adopting the name Richmond Highway.

Jefferson Davis was the president of the Confederate States of America during the Civil War. The removal of his name comes amid various efforts to remove Confederate tributes across the commonwealth. Del. Luke Torian, 52nd District, touched on this during the ceremony.

“I believe the actions that the county board has taken [are] consistent with the actions that we have taken in the Virginia General Assembly,” Torian said. “We have removed monuments and statues that have been a blight on our state and our communities.”

Wheeler said after the ceremony that though the decision to rename the road was easy, the process to do so was anything but.

“Nothing is ever straightforward in county government,” Wheeler said. “We had hundreds of businesses that had to have their address changed.”

Both Franklin and Bailey said the community response was positive during the transition.

“The positive responses we got encouraged us to move forward with the process,” Bailey said.

According to a project overview, the name change is estimated to complete by July 2023.

The clown car of local fascists and racists has spoken!

It's long past time to finally remove this disgusting tribute to White supremacy!

[unsure] The entire event was as silly as renaming the road in the first place. To those of us that live here and have lived here it'll always be Jeff Davis Highway. Tearing down the names and likeness of those Confederate luminaries wont erase them anymore than renaming everything under the sun after Martin Luther King jr will make him or George Floyd the saints the media wants them to be made out to be. No matter how hard these carpetbaggers try, the history of this area is steeped in Confederate traditions and history that will not be forgotten or erased.

I've said it before and I'll say it again, what a waste of money. We certainly could have used the money it is costing to replace the road signs for something that actually matters. So, I'm laughing out loud, you change the name from the President of the Confederacy to the Capitol of the Confederacy!!! Yeah, that made a lot of sense. I am sure Dutko will chime in, he always does as the Troll he is.

Billionaires are funding the transformation of the former homes of founding fathers and molding history taught/displayed in those homes to fit the lefts narrative.

I wonder if Fairfax County will rename their county which was named after the largest slave owner in Northern Virginia. He never freed a single of his slaves. Easy to grand stand by renaming street. How about Prince William Duke of Cumberland who after the Battle of Culloden Moor slaughtered any Scottish civilians he could find.

Fret not. I expect Chairwoman Wheeler to announce the change of her name in the next few days, since it is associated with the much adored Confederate General Joseph "Fighting Joe" Wheeler.

Do they have stock in signs like Anne Wheeler does in tech and data centers. Recall all of these race baiting hacks. None of these people give a flying f about streets or citizens. Time for a change of leadership.

so sad all that money could be going for needy people

But would it? There are a bunch of you who decry feeding schoolkids, deny help to the needy, and belittle those that need help (mental or physical).

And it is Republican votes that consistently vote Nay.

So no, your statement rings hollow.

Meanwhile the Biden budget is increasing military spending to record levels and sending it overseas to fight a proxy war with Russia. I remember when predditors and democrats alike used to complain about the military budget. I guess it is ok now. Slava Ukraini! Where is all that money even going? I heard Ukraine is a very very corrupt country with links to the Biden crime family.

I love projection. It give investigators an inkling of where to look.

But for the Ukrainian War, I would love to hear your thoughts as to why we should not be helping an ally. And before you answer, go back to the Budapest Memorandum and take that a look over. And then tell me why Russia invaded in 2014.

THEN I want you to tell me about the Russian mafia who lived in Trump Tower.

@dutko..loosen the tin foil hat, even for you this is excessive.

There's only one issue George, and it's not John. He's spot on. Pretty sure it either side cared, tik-tok wouldn't be what it's become in the u.s. as well. Our "leaders" blame China, when it's really our leaders allowing the nepharious brain damaging entertainment to exist. They mock the west because they know they don't have legitimate answers to their problems, because they are the problem.

Rt 50/Robert E :Lee Hwy goes across VA from east to west - and most of it will stay Robert E Lee Highway - so suck on it if you cant handle that.

Notice the massive crowd of a dozen or so they had on hand for tearing down more US history. None of these people will be remembered in anyway shape or form like the heroes of the southland and the founders of this once great republic. These clowns are nothing more than useful idiots in this Marxist revolution against America, self righteous losers at life. And all you self loathing white liberals will one day get what you wanted, just not how you envisioned it.

"this once great republic"?? If America, the greatest nation on earth, no longer meets your liking, you are free to live in any other country that is better. We dont need your unpatriotic kind here anyway.

LOL, the fake patriotic leftist. You've cultivated a demonic, degenerate narcissistic society. Just turn on the TV or internet. If you ever leave your house or interact with the zombie public this would be self evident.

So now America is a demonic, narcissistic country???? Why do you continue to live here then?? Just curious though.. what country/countries do you rank higher than the USA??

You just want to be a slaveowner.

Well he'll have to move to China, India, Iran, North Korea, Russia, somewhere else. Where it currently exists today. Seems like social media and your average grade school teacher only cares about slavery in the history of the Democrat party.

The Wikipedia article makes Jefferson Davis appear to be some sort of redeemed villain after the civil war, where he encouraged ex-confederates like himself to accept the Union. He also wrote a book, apparently, about the fall of the Confederacy, which should be valuable information for anyone wishing to know first-hand accounts of why the Confederacy lost the war. Anyways, I always thought the road was called Richmond Highway. Let's end the tradition of naming portions of state routes in the first place! So confusing and few other states do that chicanery. Anyways, congrats on the new sign. If it helps, it helps, cuz it sure don't hurt-- except to completely vilify historical figures. Then, you might never read what valuable info they had to share, perhaps after their redemption.

Wish we could change the names of the people that are in the picture.