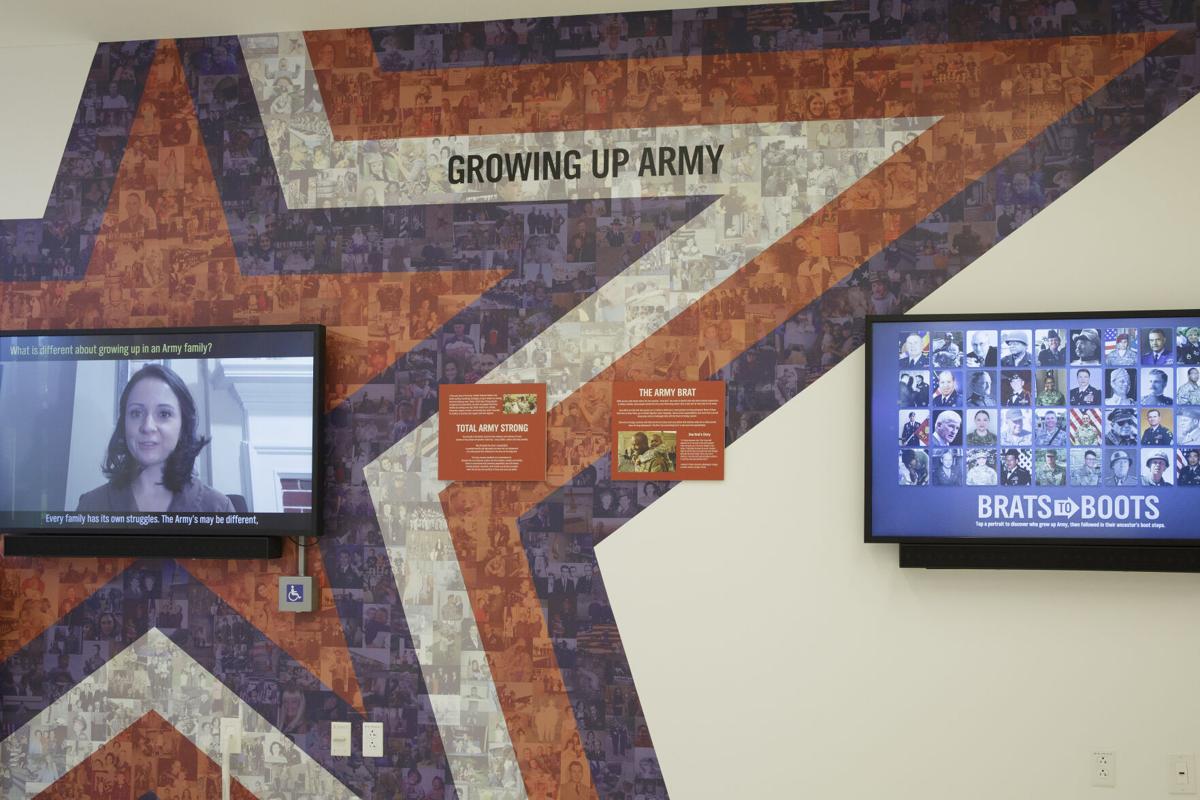 “Growing Up Army” is a video in the Experiential Learning Center that gives firsthand accounts from Army Brats across generations that reveal the adventures and challenges of a life defined by their parents’ new duty station or next deployment; “Brats to Boots” highlights Soldiers who grew up in Army families and then continued the family tradition by joining the service. 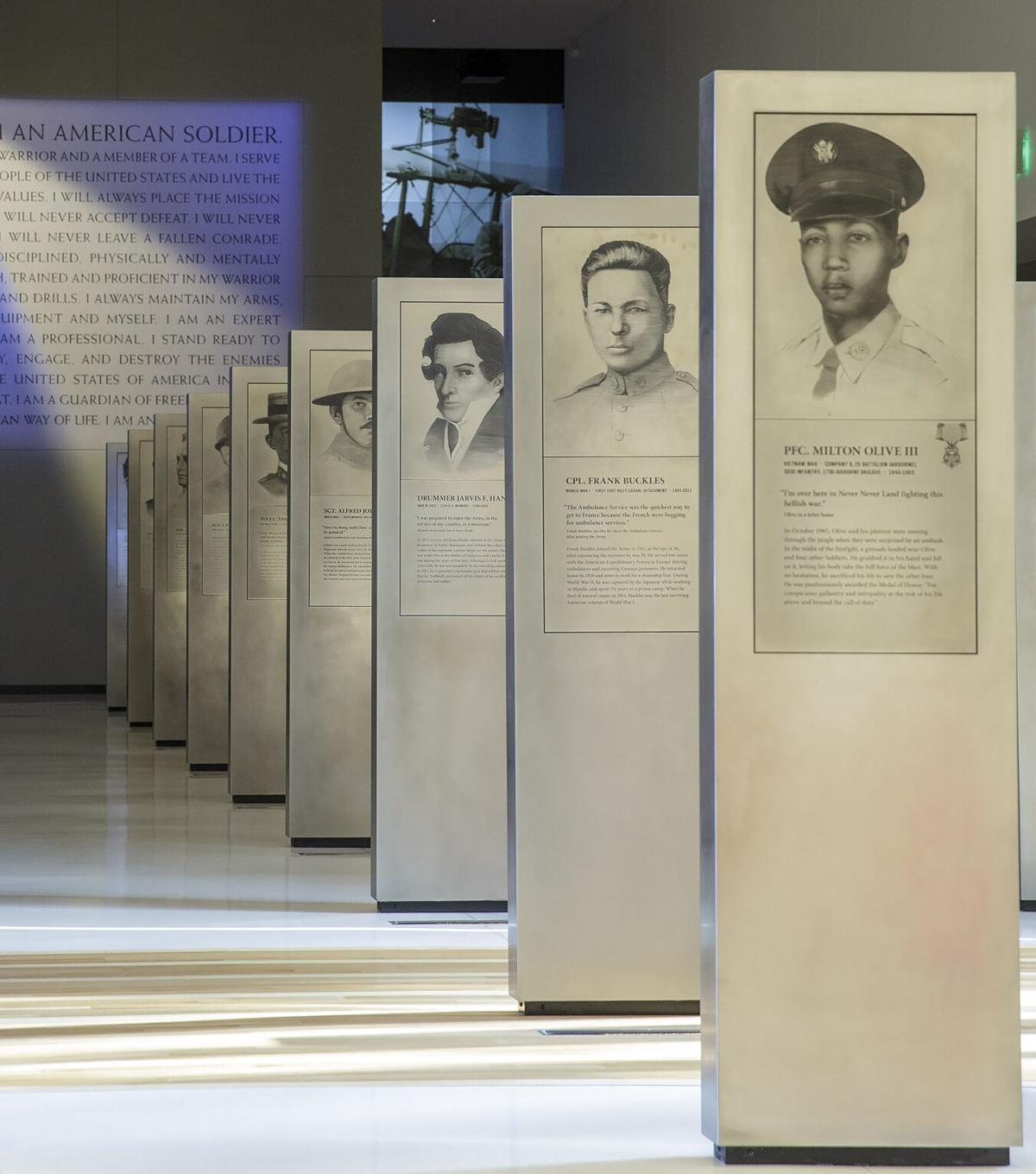 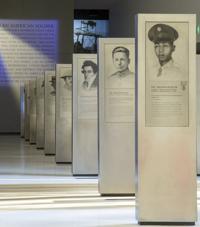 The Soldiers' Story Gallery personalizes acts of heroism and honor throughout the Army's history, and is a transition from the lobby to the major galleries.

“Growing Up Army” is a video in the Experiential Learning Center that gives firsthand accounts from Army Brats across generations that reveal the adventures and challenges of a life defined by their parents’ new duty station or next deployment; “Brats to Boots” highlights Soldiers who grew up in Army families and then continued the family tradition by joining the service.

The Soldiers' Story Gallery personalizes acts of heroism and honor throughout the Army's history, and is a transition from the lobby to the major galleries.

Jim and Tamara Sherrick drove from Annapolis, Md., to visit the new National Museum of the United States Army on its opening weekend and came away very impressed.

“It’s overwhelming,” Jim Sherrick said. “They did an amazing job. There’s seven primary galleries, and you could spend all day in any one of the galleries.”

Tamara Sherrick agreed there was much to absorb.

“We learned about Remington typewriters, and how they had to stop making typewriters to make the Remington gun. How cool is that?”

After decades of planning and years of construction, the museum on Fort Belvoir celebrated its grand opening on Veterans Day.

The moment was marked with no ordinary ribbon cutting. In a recorded sequence before heavy rain descended on the area, the Army’s Golden Knights parachuted to the front door, delivering a ceremonial sabre to Sgt. James Akinola, the U.S. Army soldier of the year. Akinola then presented it to Museum Director Tammy Call, who cut the gold and black ribbon, flanked by the Army’s top leaders.

The museum serves as a reflective monument on a hill that tells the story of 245 years of Army history. The museum brings to life the history of the Army in times of war and peace as told through the eyes of soldiers. It also offers educational experiences illustrating the Army’s role in building and defending the nation, as well as Army humanitarian missions and technological and medical breakthroughs built on Army ingenuity.

The Museum is a partnership between the U.S. Army and the Army Historical Foundation. The Army provided the Fort Belvoir site, infrastructure, roads, utilities and exhibit work, while the Foundation constructed the 185,000 square-foot building with private funds.

During the opening ceremony, which was closed to the public and the media and live-streamed, Gen. James McConville, Army Chief of Staff, said everyone involved in the museum’s opening should be extremely proud.

“The Army’s history is America’s history. The Army has been here since before the birth of our nation,” McConville said. “Our founding fathers recognized the need for an army to protect our freedoms and our way of life, and we have been doing that for over 245 years. The Army exists to protect the nation. That’s our job, and that’s what we work hard to do every single day, and we are proud to serve the American people.”

McConville noted that every soldier has a story, and the Army museum is the home of those stories.

“We stand on the shoulders of those who have gone before us; we strive to live up to their legacy every single day,” he added. “We are blessed to have men and women who are willing to raise their right hand and say, ‘send me.’ They’ve been willing to sacrifice their lives to make us the greatest country in the world. These sacrifices will inspire everyone who visits the museum.”

Gen. Mark Milley, chairman of the Joint Chiefs of Staff, said the country’s freedom has been paved with incredible sacrifice and commitment, from the soldiers of the Continental Army to today. He said Americans cannot comprehend what they went through “unless we see the weapons they used, feel the uniforms they wear, hear the stories they told, or read the letters they wrote.”

The artifacts and the stories displayed in the museum show how much soldiers endured for their devotion to the U.S. Constitution, Milley said.

“It is that document that gives us purpose to our service,” he added. “And we, in uniform, are willing to die to pass it onto the next generation.”

While most nations have an army, Milley said, the U.S. Army is unique.

Ryan McCarthy, Secretary of the Army, said the museum’s opening on Veterans Day was particularly fitting because the museum salutes the sacrifices of those who served.

“This is a homecoming, of sorts,” McCarthy added. “Under one roof, we have the Army story, safeguarded and preserved for our children’s children, and for generations to follow. In doing so, we have the nation’s story captured as well, as they are inextricably linked.”

Visitor Melanie Burton from Lorton said one of the videos struck close to home.

“I used to work with somebody, the coolest guy – very unassuming. He was a ‘Dustoff’ pilot in Vietnam, and watching the movie in there, I saw what he went through and I had a whole new appreciation for him. To see what he must have gone through every day – that opened my eyes to him.”

The National Museum of the U.S. Army is located off Fairfax County Parkway at 1775 Liberty Drive on a publicly accessible area of Fort Belvoir.

Admission is free, but timed tickets must be obtained online at thenmusa.org