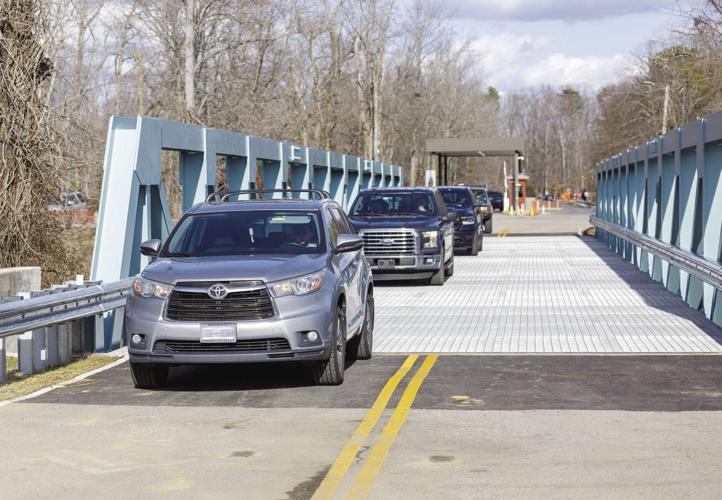 The first vehicle traffic rolls across the new Dogue Creek Bridge on Fort Belvoir on Feb. 23. The bridge, closed four years ago for safety concerns, offers a more direct route to residents and commuters from north of the installation. 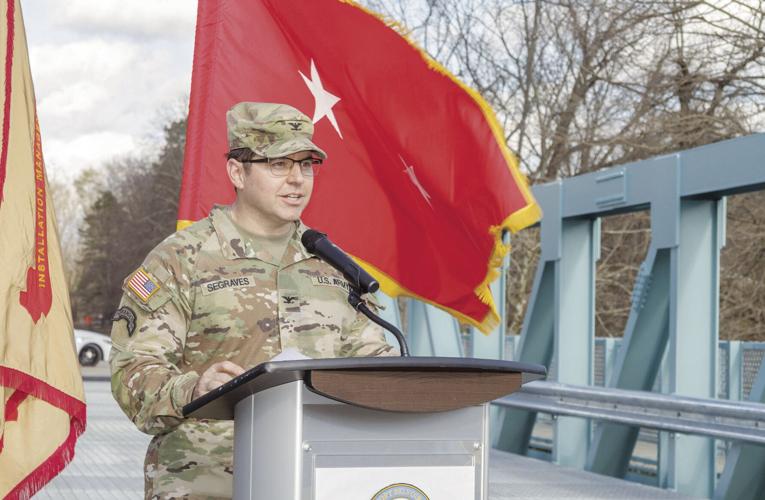 The residents of several Fort Belvoir housing communities and many commuters have regained convenient access to the installation with the replacement of the Dogue Creek Bridge that connects the northeast side of the installation to Mount Vernon Highway.

“With the contract awarded in November 2019, now, more than 1,100 days later, we’re able to celebrate the bridge’s reopening,” SeGraves said.

Dignitaries from the Army’s Military District of Washington and the U.S. Corps of Engineers were on hand to celebrate the moment.

SeGraves noted that because the prior bridge was of historic note – and also because of the COVID-19 pandemic – construction took much longer than the Army hoped. The bridge was originally slated to be completed in July 2020.

“I’m certain this means a great deal to residents, but especially those from River, Dogue and George Washington villages,” SeGraves said. “Everyone who worked on this project can take great pride in their contributions that help move Fort Belvoir into the future, with a bridge that’s expected to last another six decades.”

The bridge will also benefit commuters coming to Fort Belvoir from the north, which is notable, because Fort Belvoir is home to more employees than the Pentagon.

“I appreciate the long-standing partnership that Baltimore district has had with Fort Belvoir to ensure the readiness and sustainability of the space for not only the base and the soldiers but for our nation as well,” she said.

Pinchasin said the timing of the reopening was appropriate because it occurred during National Engineers Week.

The project included demolishing and removing the previous 60-year-old bridge, installing new bearings and expansion joints on both ends of the bridge, implementing railings on all four corners of the bridge and adding a walkway that runs all the way downstream.

“It's not just a beautiful piece of infrastructure – it pays homage to the history of the bridge itself and the construction that took place here by Army Engineers years ago, but it also provides great benefit to the Fort Belvoir community,” Pinchasin said.

“That’s critical as our trucks and loads continue to increase in the future, and you’ll have future projects on Fort Belvoir that we use the bridge for access, so it means a great deal to the garrison,” SeGraves said.

“The bridge is once again an integral part of our operations that will ensure the safety of everyone that uses it,” he added. “It’ll be a quality of life improvement for not only the residents but also the commuters who will now access the post from Mount Vernon a lot faster and more conveniently.”

After the dignitaries cut the ribbon, a team quickly moved chairs out of the way for a line of vehicles already waiting to get on post through WalkerGate. The gate should ease congestion at some of the other entry points, because it will be open for morning and evening rush hours.