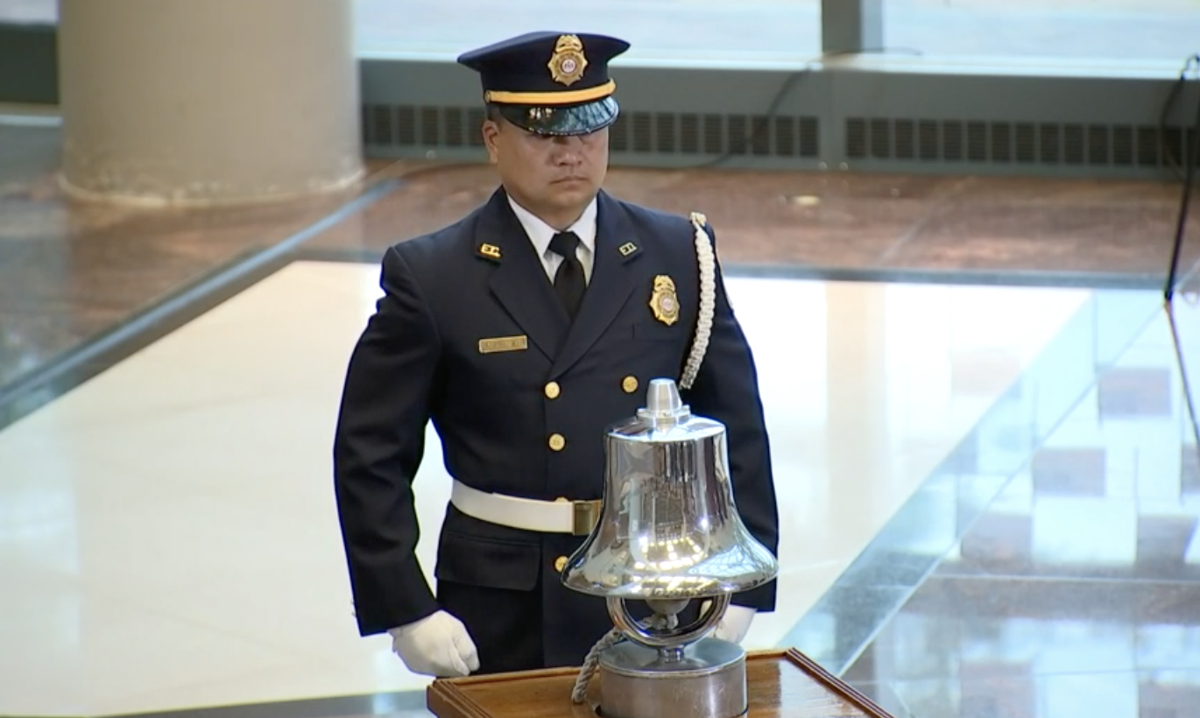 The Northern Virginia Regional Commission's remembrance ceremony concluded with a “last alarm” bell service in memory of those who died in the line of duty, a tradition in the fire service that dates back over 150 years. 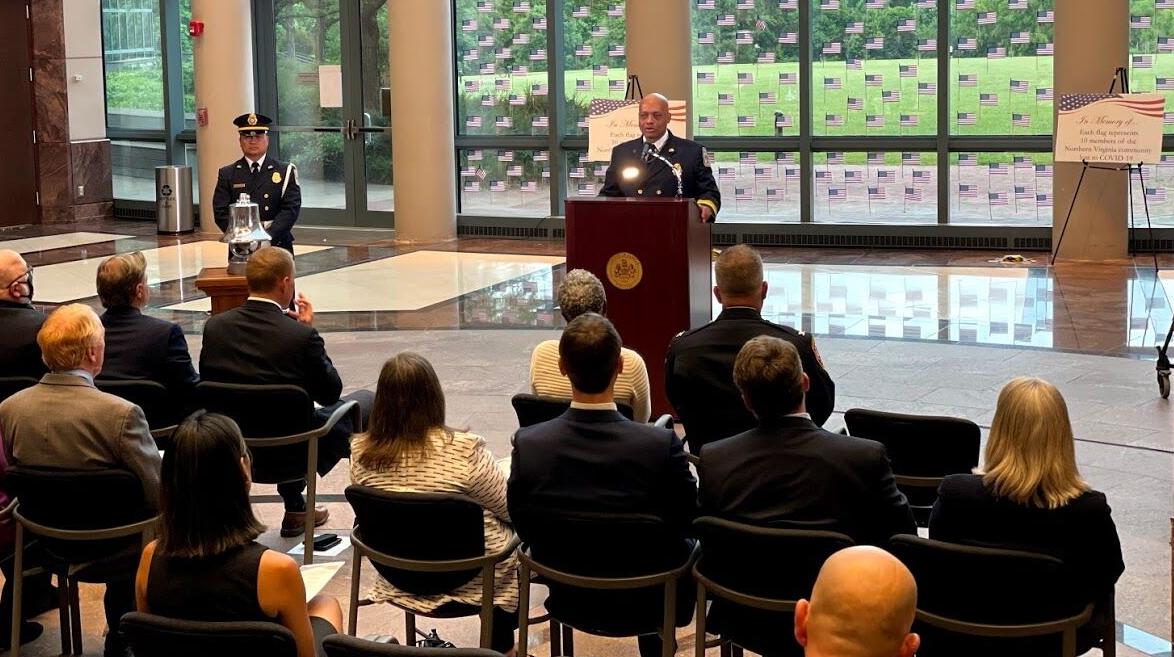 Fairfax County Fire and Rescue Chief John Butler and other speakers at the ceremony on Wednesday remembered the victims of COVID-19 from Northern Virginia and talked about the pandemic's impact on the community.

The Northern Virginia Regional Commission's remembrance ceremony concluded with a “last alarm” bell service in memory of those who died in the line of duty, a tradition in the fire service that dates back over 150 years.

Fairfax County Fire and Rescue Chief John Butler and other speakers at the ceremony on Wednesday remembered the victims of COVID-19 from Northern Virginia and talked about the pandemic's impact on the community.

The more than 2,360 Northern Virginia residents who lost their lives to COVID-19 were remembered Wednesday evening during a hybrid in-person/virtual ceremony at the Fairfax County Government Center.

The Northern Virginia Regional Commission's COVID-19 Remembrance Ceremony was meant to honor the lives lost in the 13 jurisdictions that make up the regional commission: Arlington, Fairfax, Prince William and Loudoun counties; the cities of Alexandria, Fairfax, Falls Church, Manassas and Manassas Park, and the towns of Dumfries, Herndon, Leesburg and Vienna.

Leaders from throughout Northern Virginia came together to address the impact COVID-19 has had on the region. Additionally, to represent those who serve on the front lines, Fairfax Health District Director Dr. Gloria Addo-Ayensu, Fairfax County Fire and Rescue Chief John Butler and Fairfax County Police Chief Kevin Davis also spoke.

David Tarter, the mayor of Falls Church and chair of the regional commission, began the event by mourning the lives of parents, siblings, grandparents, children, friends and neighbors that were cut short because of the deadly disease.

“We Northern Virginians have worked collaboratively together to stem the tide of the coronavirus pandemic, but our losses are considerable,” Tartar said.

The sacrifices and dedication of healthcare professionals, police, fire and rescue and other frontline workers was also acknowledged.

“Although we in Northern Virginia have come far in our battle against COVID, for much of the world, the pandemic is still in full force,” Tartar added. “We know, we are not safe, until everyone is safe, from this pandemic.”

Tartar and several other speakers, including Addo-Ayensu, noted the need for Virginians to continue to be vaccinated to quell the spread of the virus and protect those who still remain at risk for severe disease and death.

“We are not completely out of the woods, because we haven't reached the level of immunity required to stop the COVID virus from circulating in our community,” Addo-Ayensu said. “While many have been vaccinated. Many others have not yet had access to the vaccine or made a decision to get vaccinated, and children under 12 are not yet eligible. So, our work is far from over.”

Fairfax County Police Chief Kevin Davis shared an anecdote about one of the police department’s colleagues, Lawrence “Larry” Magni, who died of complications from COVID-19 on Aug. 25.

Since 2017, Magni, 63, had been the director of police's facilities and security division. Davis said Magni’s service with the department began in 1990, when he joined the West Springfield station as an auxiliary police officer. Davis said Magni left the department in 1999 and moved to Houston, but later came back to Fairfax and he was hired into his most recent position.

The ceremony concluded with a “last alarm” bell service in memory of those who died in the line of duty, which is a tradition in the fire service that dates back over 150 years.

“The sound of the bell heals us and brings special significance, at least the firefighters,” said Fairfax County Fire Chief, John Butler. “Historically the toll of a bell summoned members to the station, it signaled the beginning of a shift. It notified the departments of a call for help and indicated a call was completed, and the unit had returned to the station. Today, the tradition of ringing the bell is symbolic and used ... to represent the end of an emergency, and return to quarters. Today we adapt that symbolic ceremonial act in a slightly different way.”

How ‘The Good Fight’ Season 5 Premiere Wrote Out Adrian & Lucca