Construction is expected to begin soon on the Tuscarora Crossing affordable-housing complex, which will have 180 units south of the Village at Leesburg. 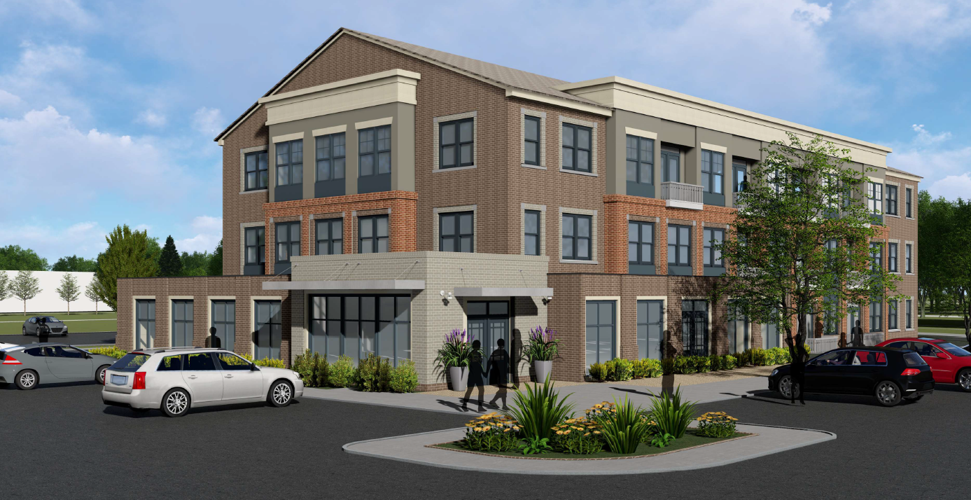 A rendering of Cornerstones' proposed Fairfax County affordable-housing project, planned for West Ox Road and U.S. 50. The project is still under review by the county.

Construction is expected to begin soon on the Tuscarora Crossing affordable-housing complex, which will have 180 units south of the Village at Leesburg.

A rendering of Cornerstones' proposed Fairfax County affordable-housing project, planned for West Ox Road and U.S. 50. The project is still under review by the county.

A Reston-based nonprofit is working with Loudoun and Fairfax counties to build 214 new affordable housing units over the next three years.

The new homes will bring both counties closer to their goal of creating more affordable housing for low-income families and single people at risk of homelessness.

The nonprofit, Cornerstones Inc., has provided services such as affordable housing, childcare, and emergency shelter to Fairfax residents since 1970. Its subsidiary, Cornerstones Housing Corp., owns and operates 106 affordable housing units in Reston, Herndon, and Centreville that primarily serve households below 30% of the area median income and individuals who were previously homeless.

“Northern Virginia…to what it was 20 years ago to when I moved here in 1976 – it's such a different place,” Wilson said. “It's changed and grown, and the people who now live here and work here are different. Our needs are different. And I think Cornerstones has really been at the forefront of responding to those changes.”

Wilson noted that the amount of affordable housing currently being built in Loudoun and Fairfax is not enough to satisfy the need. But as co-chair of the Fairfax housing council, Wilson said she and her organization have at least been able to help shape policy around creating and preserving affordable housing.

“What we do is trying to bring our experience – what we know from the people we’re serving – bring that to the table,” she said.

On Oct. 21, the Fairfax County Department of Housing and Community Development held a public hearing on Cornerstones’ proposal to build 34 one-bedroom affordable housing units on 1.2 acres of land at the intersection of West Ox Road and U.S. 50. Cornerstones cannot start the next phase of the development process until they and the county reach an interim agreement.

The county did not act on the proposal; a spokesperson for the department noted that the county could take it up again in December.

If an interim agreement is reached, then the land, owned by the county, would be leased to Cornerstones on a long-term basis under the Public-Private Educational Facility and infrastructure Act.

Cornerstones would be responsible for financing the project, said Michael Scheurer, executive vice president of housing and community development for the nonprofit.  He projects that the units won’t be ready for about 3½ years, due to time required for planning and construction.

The project would cost about $11 million and provide permanent affordable housing to extremely low-income households and singles at risk of homelessness.

“It would be full-time housing for them,” Scheurer said. “Some of them literally will come out of the shelter.”

Scheurer said the facility would be staffed 24 hours a day, and Cornerstones would partner with other county programs to help young singles access social services.

Meanwhile, construction of the $70.5 million Leesburg development, Tuscarora Crossing Apartments, is planned to start much sooner.

“We are ready to go to construction,” Scheurer said. “We have all of our financings in place.”

The Tuscarora Crossing development, south of the Village at Leesburg, would contribute to Loudoun’s “Unmet Housing Needs Strategic Plan,” adopted in September. The plan lays out strategies for facilitating partnerships with developers, as well as securing funding and land for affordable housing projects.

The apartment complex will include 180 affordable housing rental units (one-, two-, and three-bedrooms) serving people below 60% of the area’s median income, according to Scheurer. Amenities will include common spaces, multi-purpose community rooms, a fitness area, a recreation facility and walking trails.

Construction of the Leesburg development has been delayed because an access road needs to be built to the site, but it should start by January.

The primary investor of Tuscarora Crossings is Wellington Development LLC. Wellington started the project about two years before Cornerstones was brought in as a joint venture partner. Scheurer said Cornerstones has invested half a million dollars in the project so far, but Wellington is taking on the bulk of the financing for the project.

“As a nonprofit we don't pay federal income tax, so we’re … allowed to sell those tax credits to investors who do want them,” Scheurer said. “And then that income comes to the project as basically free money.”

Scheurer said one of the main reasons Cornerstones has invested so heavily in the project is because after 10 years the nonprofit would have the opportunity to buy the property and continue to operate Tuscarora Crossings as affordable housing.

Another feature of Tuscarora Crossings, Scheurer said, is that its most vulnerable residents would have access to programming designed to help with eviction prevention, family stability, educational enrichment and health and wellness services.

“We will assign a full-time caseworker to those people,” Scheurer said. “And this normally does not happen in affordable housing.”

Scheurer said households that fall below 50% of the area median income would have priority accessing these services, but noted that residents with a higher income would not be denied help if they need it. “We always triage… the lowest incomes first, because they have the greatest needs.”

Kelsey Grammer says Frasier reboot 'is in the final stages'