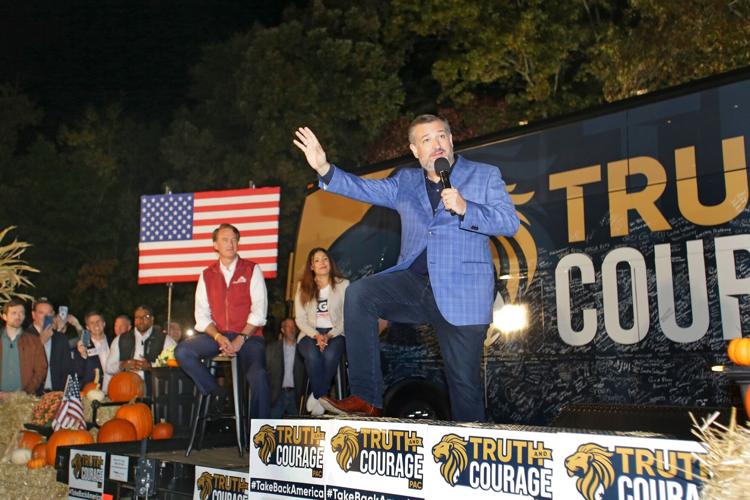 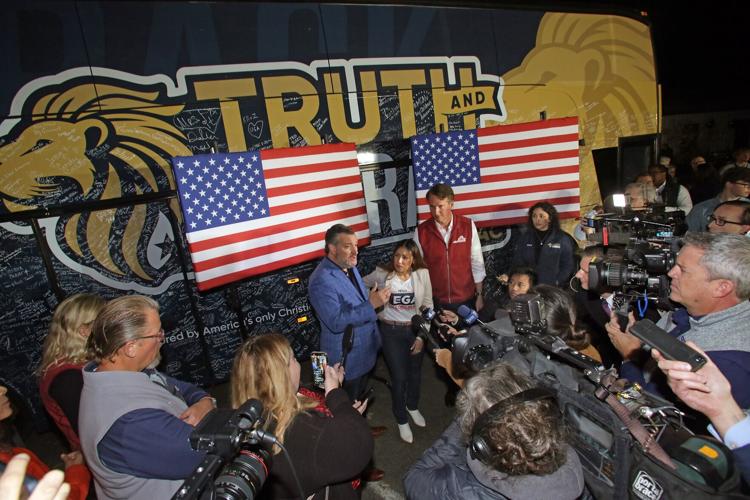 Republican Yesli Vega, a candidate for Virginia's 7th District, gets a show of support from U.S. Sen. Ted Cruz and Gov. Glenn Youngkin as part of the Truth and Courage Super PAC campaign event in Dumfries on Monday night. 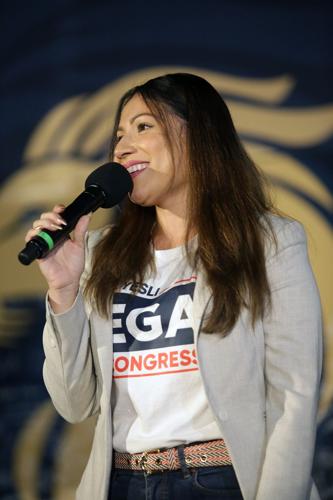 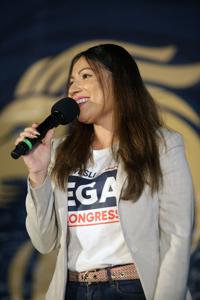 Republican congressional candidate Yesli Vega of Virginia's 7th District speaks to an enthusiastic crowd during a campaign appearence at the Montclair Tabernacle Church of God in Dumfries Monday night.

As the temperatures go down and election season heats up, the Truth and Courage Political Action Committee led by U.S. Sen. Ted Cruz drove into Dumfries Monday night to gin up support for 7th Congressional District candidate Yesli Vega as she tries to unseat incumbent Abigail Spanberger.

Vega, a Republican and the first Hispanic elected to the Prince William Board of Supervisors, brought heavy criticism to Spanberger.

"She talks a big game about being a moderate, but she votes with Joe Biden and Nancy Pelosi a hundred percent of the time," Vega said.

Cruz and Gov. Glenn Youngkin were among the featured speakers at the event held at the Montclair Tabernacle Church of God. Hundreds of supporters from as far as Richmond turned out for the rally, with Cruz clearly being a major draw.

"I've worked for conservatives and Republican candidates my whole life, and I wouldn't miss him for the world," said 71-year-old Lupe Sigman, one of the many attendees who waited late into the evening for a meet-and-greet with the candidate, Youngkin and Cruz.

Playing up Vega's history in law enforcement – the Republican candidate is a deputy with the Prince William County Sheriff’s Office – Cruz said Democrats are "letting murderers and rapists go into our community."

"I've got a secret, if you release a bunch of violent criminals, they'll commit more crimes," he said, adding, " … the people of Virginia support their men and women of law enforcement."

Redistricting moved the 7th District boundaries from a swath of central Virginia west of Richmond to Northern Virginia. It now covers eastern Prince William, the city of Fredericksburg and all of King George, Stafford, Spotsylvania, Caroline, Culpeper, Orange, Greene and Madison counties plus about 35 voters in Albemarle County.

Spanberger, who lives in Henrico County just outside Richmond, is seeking her third term representing the 7th. Redistricting put her home in the 1st District, represented by Republican Rob Wittman, but congressional representatives are not required to live in their district.

Spanberger stumps with Clyburn in Dumfries

Democratic Congresswoman Abigail Spanberger visited one of her party’s strongholds in the new 7th District on Tuesday, meeting voters in Dumfr…

Democrats are the party of drugs sex and death. Wake up people.

Biden and Pelosi are “true moderates”. 🤣😂🤣. Is someone smokin’ Hunter’s favorite pipe?

"Lying" Ted Cruz, now a Trump boot licker, embodies the opposite of "Truth and Courage".

>>"She talks a big game about being a moderate, but she votes with Joe Biden and Nancy Pelosi a hundred percent of the time," Vega said.

That's because Biden and Pelosi truly ARE moderates, whereas Youngkin, Cruz, and Vega are clearly divisive far-right extremists.

Oh look another dig at Cruz for when he was attacked by Trump during the primaries. Funny I'm sure you don't have in your memory bank what Kamala said about Joe do you? What would you call her Allen?

Congresswoman Vega, get used to it Karens

I mean, only one party has the full support of Nazi's....

The national SOCIALISTS workers' party...there probably are a few of them still around somewhere. I mean it has two of the "progressives" buzzwords in the name!

More Nazi flags show up to Republican events for some reason. Same thing with Jan. 6th.

Oh look, election deniers and conspiracy theorists supporting each other, how nice

Don’t see Abrahms or Hillary there!

Trevor Noah thanks 'hate-watchers' of The Daily Show

‘I was the punk outsider who nobody messed with. I was FEARLESS’… These superstars were all problem children!