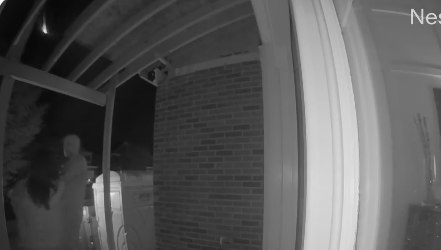 Screenshot from video captured by Trevor Hawthorn in Loudoun County as a fireball streaks across the sky on July 28, 2022. 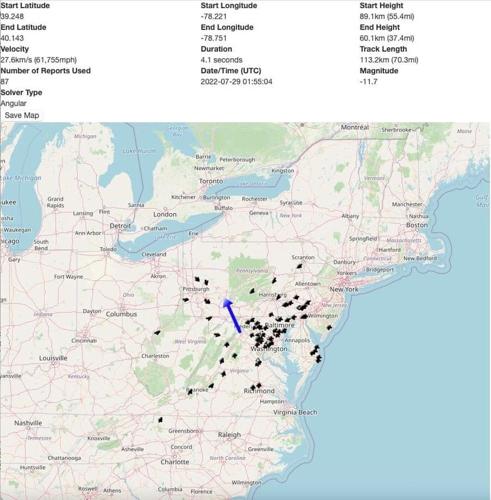 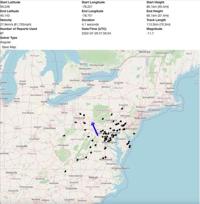 NASA map showing possible path of a meteor that streaked across the DMV late Thursday.

Did you see it? A bright fireball flashed across the skies over the D.C. area Thursday night, and was captured on many doorbell and dashcam videos.

Hey @capitalweather we caught a glimpse of the meteor in Loudoun County! pic.twitter.com/WOnqXHVOjR

NASA Meteor Watch says “a very preliminary solution” indicates the meteor started out in Northern Virginia west of D.C. at 9:56 p.m., moving north into Pennsylvania at 62,000 miles per hour.

Witnesses said the fireball was green to white and very bright.

In one report to the American Meteor Society, a Pennsylvania resident said it looked like a “glowing train, like it was on fire.” Others reported the fireball flashed at the end, trailing green sparks.

NASA defines fireballs as brighter-than-usual meteors, with several thousand occurring in the Earth’s atmosphere each day. Most go unseen since they happen in isolated areas or during daylight hours.

Political animals! These stars are proud supporters of the Republican Party