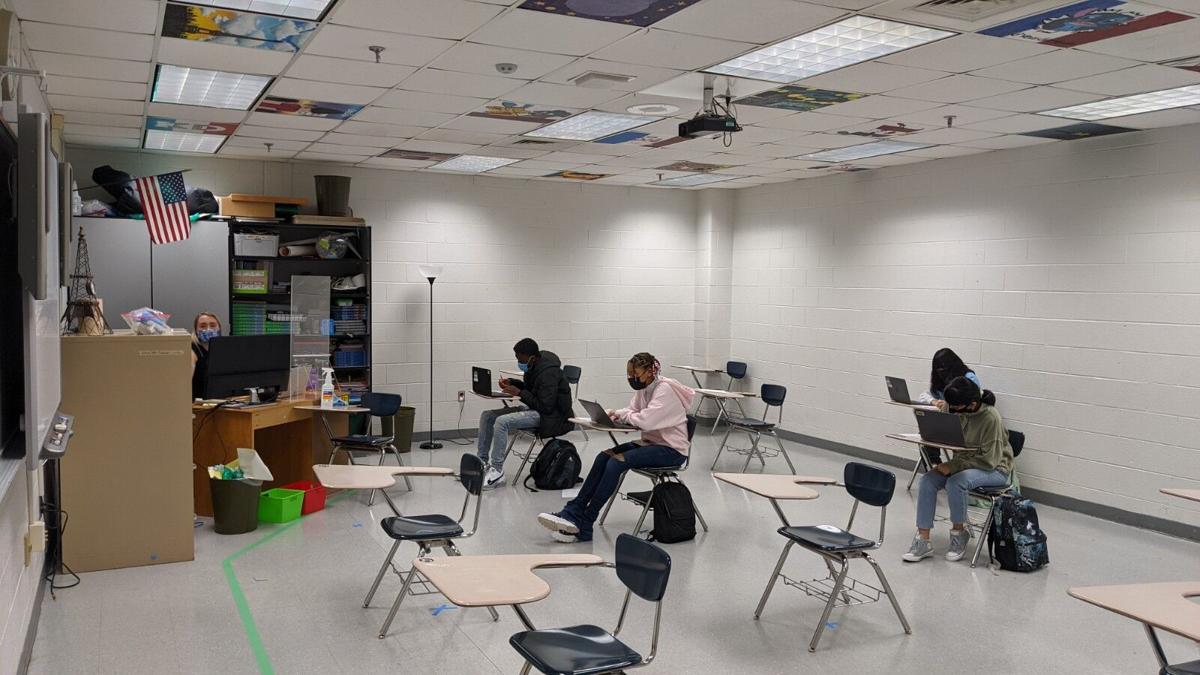 Hylton High School freshmen whose families opted for in-person learning had their first day in a high school building on Thursday, Feb. 25. 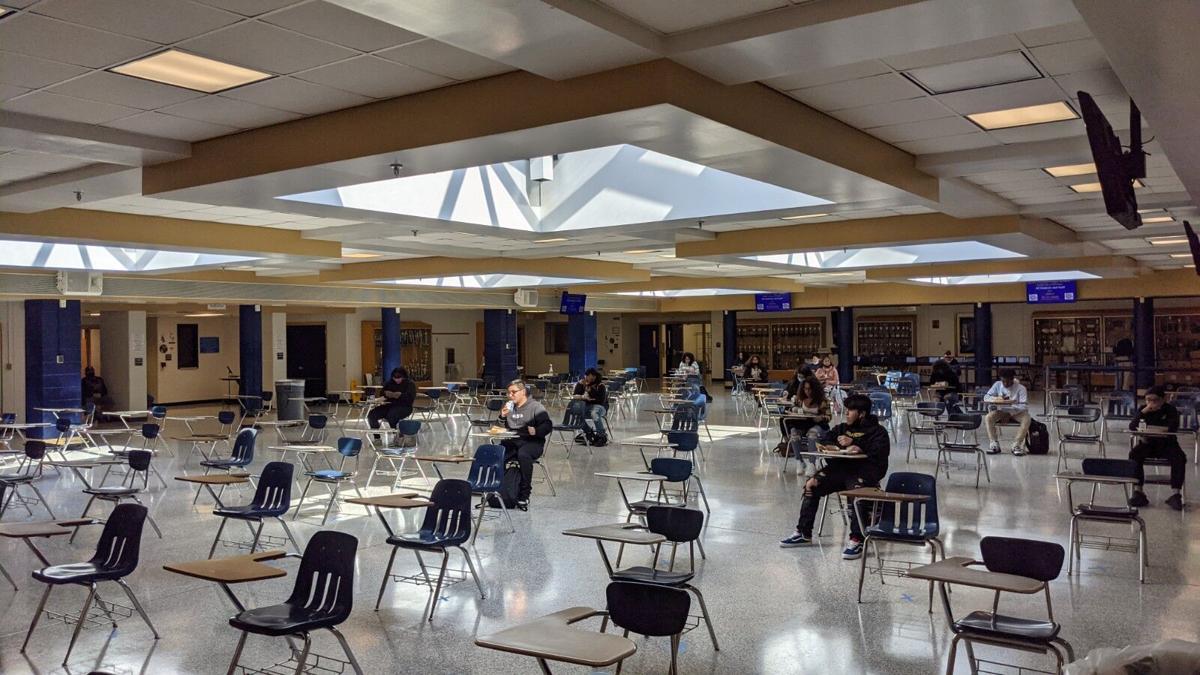 About 100 Hylton High School ninth-graders signed up for in-person learning. Only about 60 showed up, school officials said. 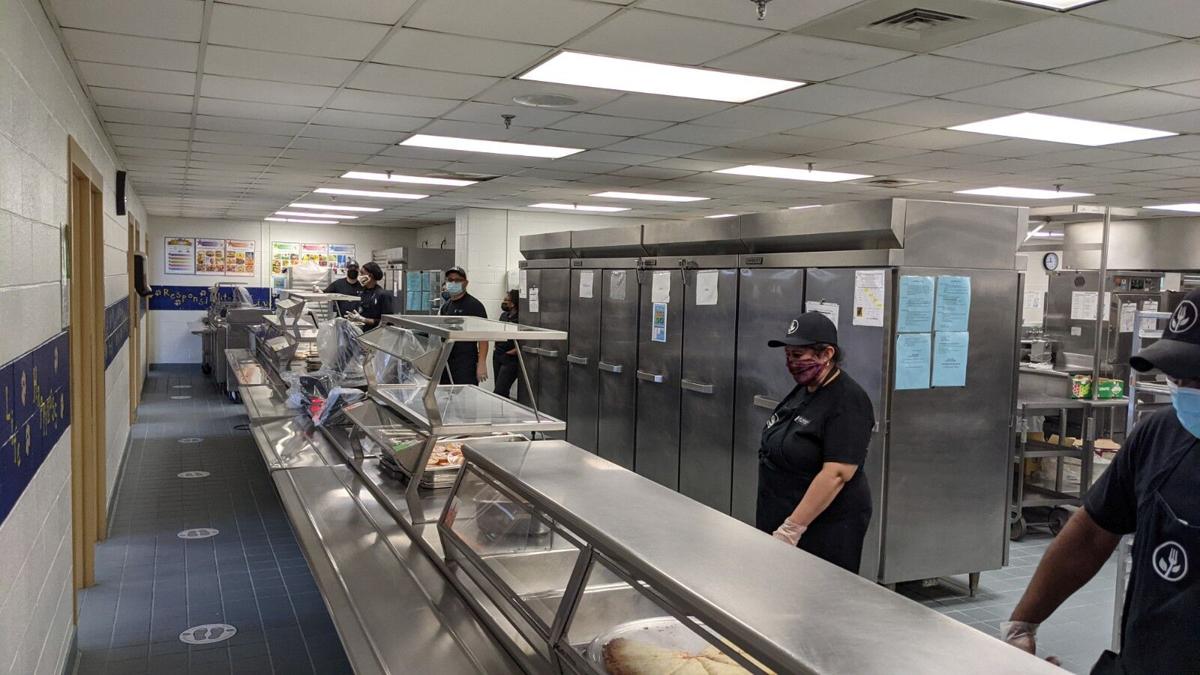 Things look much different at Hylton High School, from the quiet halls to the masked cafeteria employees.

Hylton High School freshmen whose families opted for in-person learning had their first day in a high school building on Thursday, Feb. 25.

About 100 Hylton High School ninth-graders signed up for in-person learning. Only about 60 showed up, school officials said.

Things look much different at Hylton High School, from the quiet halls to the masked cafeteria employees.

Assistant Principal Betsy Campagna walked the halls of Hylton High School Thursday morning, making sure things are going as smoothly as possible for the ninth-grade newcomers during an historic “first” day of school.

“You guys know where you're headed?” she asks a pair of students on their way to the cafeteria. Yes, they respond.

Satisfied with their answer, she wishes them a good lunch and moves on to helping a teacher who’s popped his head out of the classroom to ask about the adjusted schedules.

It isn’t the first day of school, as teaching and learning have been happening since the fall over the internet, and a limited number of English-language learners and special education students have been receiving some in-person instruction. But on Thursday, thousands of ninth graders were back in classrooms for the first time in almost a year, getting a chance to learn the layout of their new buildings and acclimated to in-person high-school life before 10th through 12th arrive next week.

For families who opted out of the newly-adopted “hybrid” learning model, completely virtual learning will continue apace, with some adjustments for teachers who are now teaching both online and in-person on some days and pre-recording lessons for others.

In a typical year, freshmen would enter to a big orientation pep rally at Hylton. This year, with only about 60 students in the building, things are much quieter. That doesn’t mean the educators in the building aren’t rearing to go.

“I was like giddy yesterday, it was sort of like the night before the first day of school for me,” Campagna says. “I’m excited to just see this building have kids in it again. … It’s just nice to see them in person.”

Enrollment in a normal year at Hylton is about 2,100 students. When all the grades are in the building (split up between days), faculty expect about 350 students roaming the halls per day, or 700 in-person learners in total.

That number may very well drop, though. On Thursday, with their first group of ninth graders in classrooms, the school had about 100 students signed up for in-person instruction; only around 60 showed up.

Before schools reopened for the general student population, surveys were sent out to all families asking if they intended for their child to return. If there was no response for either of the surveys, students were marked as planning to return. And if a family indicated that they’d be staying virtual, as most of Hylton’s did, there may not be another chance for them to change mid-quarter. Administration and staff, Campagne said, meticulously planned classes, transportation and other accommodations for a certain number of students.

And teachers, already being asked to do more than they ever have, may have to fill in in ways they aren’t used to. The entire school division is facing a crunch for substitute teachers. According to Principal David Cassady Jr., the school will have three to four subs coming in every day to help when teachers are giving lessons from home or are out for other reasons. But staff know that they’ll be asked to be flexible.

“We’re trying not to use teachers to cover classes if at all possible because they already have enough to do. But there are going to be some situations … where we’re going to have to cover for each other.”

The physical changes to the Hylton building are obvious at first glance. Teachers sit behind plexiglass barriers, lines on the hallway floors direct foot traffic (with some staircases dedicated for upstairs or downstairs flow), and desks replace long group lunch tables in the cafeteria.

For physical education classes, instructors will try to utilize as much outdoor space as possible. For music students, the school has specially-made masks with holes for mouthpieces and covers for instruments.

But for school staff like Christina Langley, Hylton’s director of school counseling, there’s much more acclimating happening than meets the eye. For the ninth graders setting foot in the building for the first time, everything is new. If they happen to already know a number of classmates, they may not be in the same in-person grouping or they may be remaining entirely virtual.

For some, it’s the first day in a new school all over again, but even more isolated.

“These poor ninth graders have never stepped foot in this building. And … many of them feel like they don’t know anybody,” Langley says. “‘What does this mean for the lunch shifts? Who’s eating where? I want to have a friend, I want to have a buddy,’ these are all the typical things that are going through their minds.”

But for Langley and the rest of the counselors, it’s why having some students back in the building is so important. She says that for most students who are known to teachers and staff, adults can pick up on the signs that something might be off and offer assistance or guidance. For freshmen who are new to the school, those indicators can sometimes go unnoticed, particularly over a Zoom conference. For teachers and other adults, meeting students face-to-face is crucial to building rapport, even if it’s just a few at a time.

“I worry a little bit when I see that there’s maybe one or two in a classroom here or there, how are they feeling?” Langley says. “You don’t want them to feel more isolated; the whole point of them coming back was to feel more connected.”

Of course, even more students will be logging in from home, as they have since March when COVID-19 shut down school buildings across the country. Now, teachers will have to get accustomed to teaching for both those on the screen and in their rooms.

“We’ve all grown and learned a lot in the last few months, we’ve all picked up a whole new skill set, and then doing this concurrent simultaneous model is also a totally different skill set. It uses pieces of both in-person instruction and virtual instruction, they’re trying to take quality pieces of both and pulling them together.”

Virginia reported a record 234 new deaths related to COVID-19 on Friday and has now reported 1,099 total new deaths in the past week.