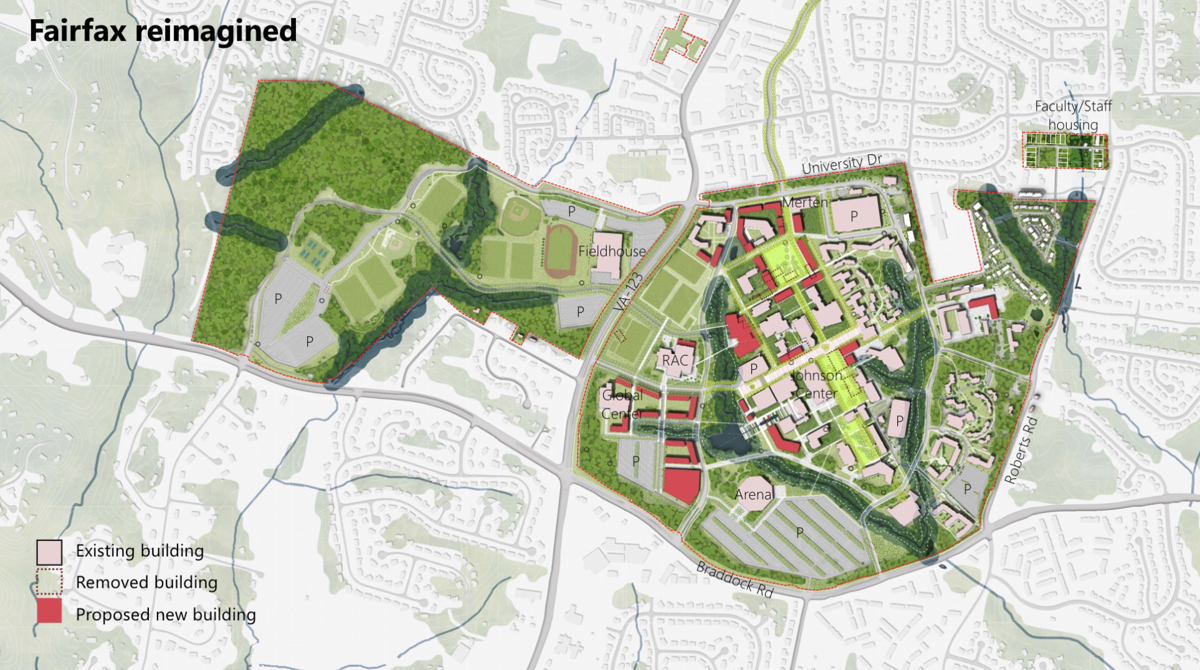 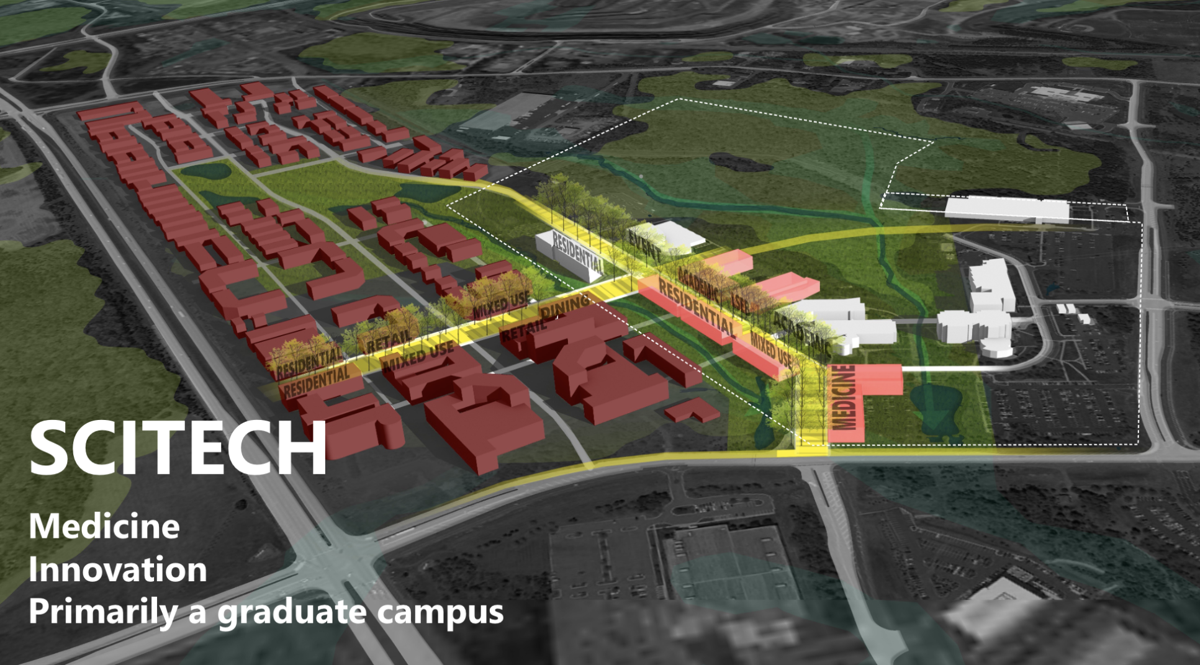 Plans for George Mason's SciTech campus in Manassas include a potential medical school and a large mixed-use development that has already been approved by Prince William County. 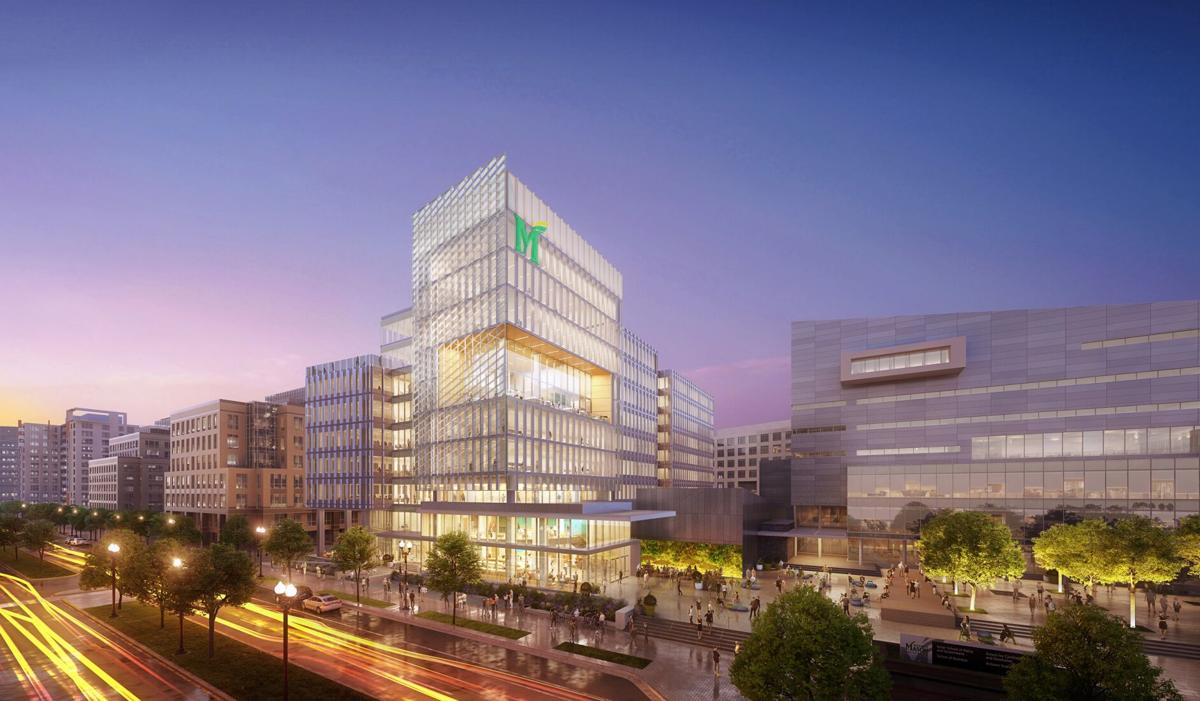 Construction is expected to begin next summer on a 500,000-square-foot facility at the Arlington campus called the Institute for Digital InnovAtion.

George Mason University is moving forward with the next phase of its expansion to construct several new residential and academic buildings, athletic facilities and recreation areas on its three primary campuses in Fairfax, Manassas and Arlington.

During a Zoom engagement session Thursday morning, the team behind GMU’s redevelopment reviewed final recommendations for the project and responded to feedback from attendees mainly about aspects such as parking and construction timelines.

The Washington Business Journal reported that GMU plans to raise $1 billion through a capital campaign to cover the construction and development costs over the course of 10 years.

The first phase of the master plan development kicked off in January 2020, and planners spent the better part of a year interviewing stakeholders, collecting data, and analyzing demographic trends. That phase was completed in April.

During the second phase, GMU expanded the master planning team to include engineers, architects and environmental and ecological designers who conducted an in-depth design investigation of what each future campus could look like.

During Thursday’s meeting, Gregory Janks, an architect from the Boston-based firm of DumontJanks and part of the planning team, largely focused on the proposed plans for the 677-acre Fairfax campus, which hosts a majority of the university’s 37,000 students.

Part of the current plan for the Fairfax campus, Janks said, is creating a new academic quadrangle at the northern end of the campus and linking a new northern quad, a new central quad and the existing southern quad.

“Each of those quads…provides an opportunity for academic neighborhoods for much easier access and connectivity,” Janks said.

“I won’t say that it has 100% unanimous support, but I can report back that after multiple engagements with the alumni group – and of course many other stakeholders – it does have the overwhelming support of the vast majority of folks who we’ve talked to,” Janks said.

Janks said the older buildings do not function well for modern academic uses and also don’t offer much historic value.

Janks said the planning team was also considering building a recreation and wellness facility closer to student housing on the eastern side of the campus because currently all of the recreational/athletic fields are on the western side.  “This would really allow us to bring recreation facilities closer to where our students are living.”

The team is also considering creating more faculty housing on the northeast section of the campus. Janks said the team is in talks with a developer, but he did not provide specifics.

Many of the new buildings, Janks said, would be on existing parking lots. Since the project began, a potential reduction in the amount of parking has been a point of contention for many people in the community who have argued for more parking. But Janks responded to attendees’ questions about parking Thursday, saying that “a significant amount of parking will remain” and the current plan did not show any loss in parking.

“The goal here is actually to try to decrease overall parking demand,” he said. “Something we have seen is that over time, on a per capita basis, we are able to decrease the demand as folks move to rideshare and other options.”

Janks added that his team intentionally avoided the need for additional parking structures but noted that the plan is flexible and could accommodate more parking if necessary.

Alex Iszard, associate vice president of planning, design, and construction for GMU’s facilities management team, said during the meeting that within the next year new walkways and art installations would be constructed along the Fairfax campus line of trees, called the “necklace.”

About 90% of the design is completed, Iszard said. “We have to go through a pretty rigorous permitting exercise, but the goal is to have this completed about this time next year.”

At GMU’s Science and Technology campus in Manassas, the design includes the potential for a new medical school, two new academic buildings, two new residential buildings and more than 1.6 million square feet of non-residential space, including a hotel and conference center, retail areas and office space. Plans for the University Village project were approved by the Prince William Board of County Supervisors in late September.

“Working with our great developer partners to realize the ‘Innovation Town Center’ is absolutely transformative for this campus,” Janks said. “It will bring a sense of vitality and a population that will enable this campus to do things that just haven’t previously been possible.”

Janks said the goal is to shift the Prince William County campus to primarily host graduate students, although there would still be some undergraduate activity.

The master plan also includes a new 500,000-square-foot facility at the Arlington Campus called the Institute for Digital InnovAtion, which is farther along in the planning process. Construction is expected to begin next summer.

The Arlington campus would primarily focus on law and policy programs, as well as other professional programs, including information and data science. The new facility would include classrooms, conference rooms, corporate offices and retail space, as well as parking.

The Arlington building is scheduled to open in September 2025.

Janks said the final master plan is scheduled to be released later this month. He emphasized the plan is only a framework and nothing is final to allow for flexibility as the university continues to study its options.

“What you're seeing here is an intent to create open spaces, to frame those open spaces and axes with life and energy and vitality,” Janks said. “But these are not actual footprints, these are not designed buildings; again, we’re at that framework level and that's always an important thing to appreciate as part of this.”

Charlie Puth made 'most of' his new album on TikTok

Mark Ronson blown away by Maneskin on SNL