You are the owner of this article.
Edit Article Add New Article
You have permission to edit this article.
Edit
Home
News
Sports
Life & Events
Obituaries
Find Our Newspapers
Special Publications
Jobs
Marketplace
Legal Notices
About Us
InsideNoVaTix
Search

The number of new weekly COVID-19 cases in Virginia may have peaked in early August, according to the latest model from the University of Virginia's Biocomplexity Institute.

The U.Va. model, updated every Friday, previously projected that the number of new weekly cases would peak statewide in late October or early November, with a total of over 200,000 cases statewide by Thanksgiving. However, the latest update suggests cases may have peaked the week ending Aug. 7, when 7,583 were reported, and that total cases should only be about 184,000 by Thanksgiving.

However, the report notes that the onset of fall and the flu season could drive the numbers higher and emphasizes that its modeling is based on current trends.  "Virginia residents should continue with social distancing and infection control," the report says. 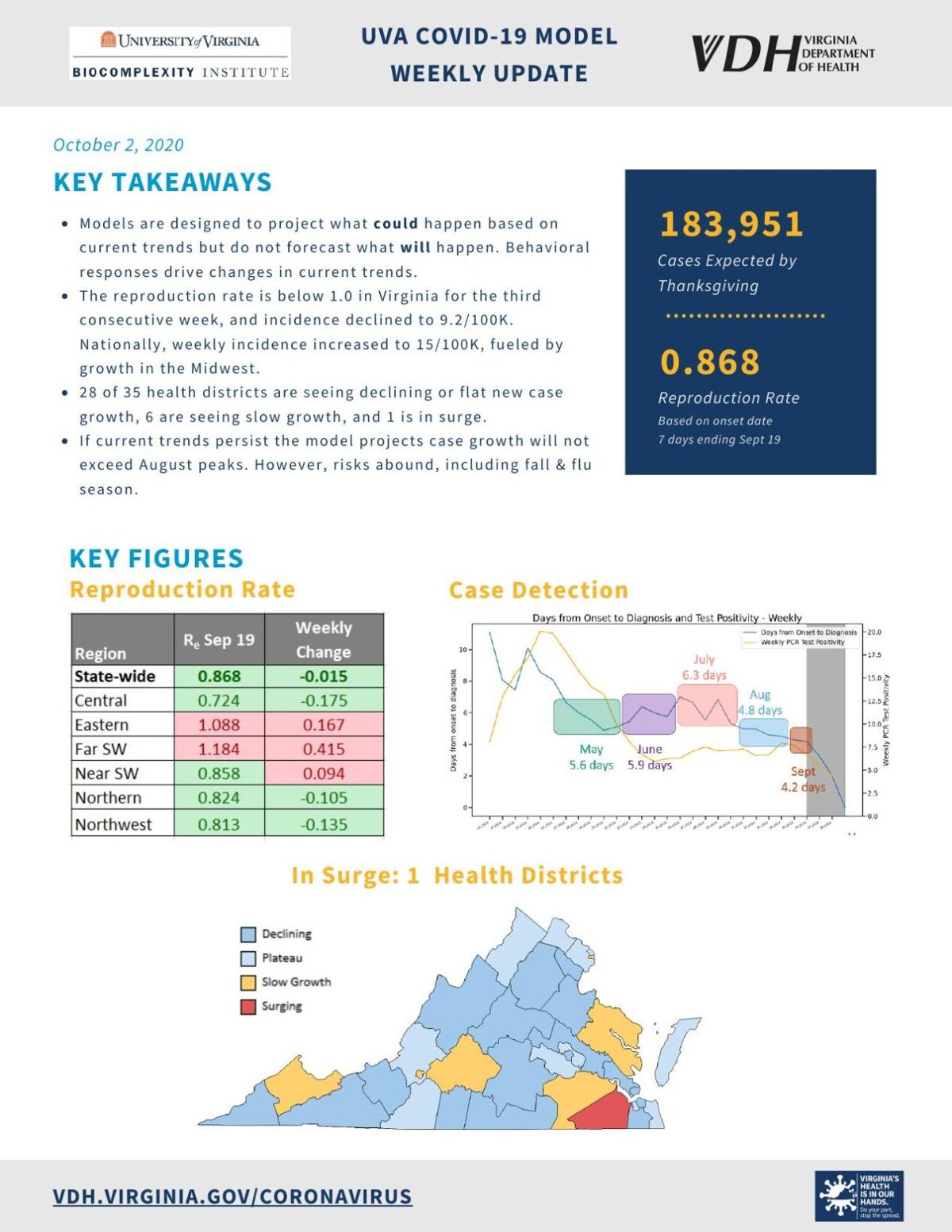 And in fact, since the report was released, the state has reported two successive days with more than 1,000 new cases apiece for the first time in over two weeks.

On Sunday, the Virginia Department of Health reported 1,067 new cases of coronavirus statewide, following an additional 1,116 on Saturday. That increased the state's seven-day average of new cases to 818.

In Northern Virginia, 268 new cases were reported Sunday, pushing the region's seven-day average up to 167.4.

The state's average diagnostic test positivity rate ticked up again, to 4.8%, but has now been below than the key level of 5% for nine successive days.  Test positivity rates for health districts were not available Sunday morning.

Only three new deaths were reported statewide on Sunday, with none in Northern Virginia.

The U.Va. report found that cases were declining or had plateaued in 28 of the state's 35 health districts. Six were seeing slow growth and only one was at a "surge" level.

The reproduction rate, or number of additional infections generated by each new infection, was at 0.868 statewide based on the onset date of symptoms for the seven days ending Sept. 19.  That was the third straight week the rate was below 1, which is the critical level for minimizing spread of the virus.  In Northern Virginia, the rate was 0.824 that week.

The institute also reported that the average time between the onset of symptoms and confirmed diagnosis dropped to 4.2 days in September.  It was as high as 6.3 days as recently as July due to backlogs of tests.

Chrissy Teigen addresses past actions: I feel the crushing weight of regret