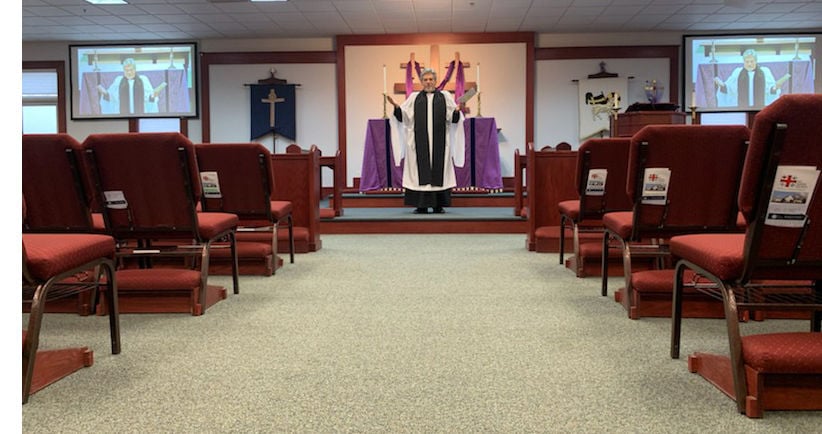 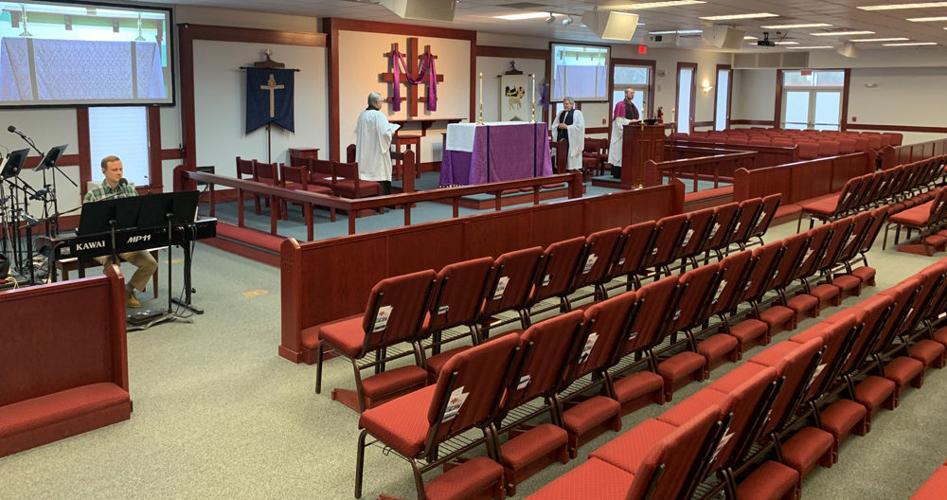 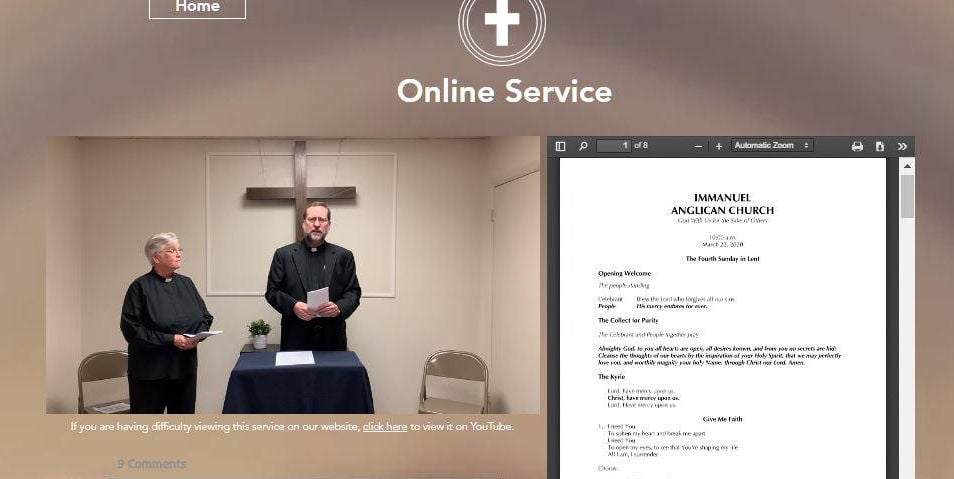 The Rev. Erin Bair propped up her laptop on a stack of cookbooks a few feet away. The impromptu additions achieved their purpose. She was now eye-level with her computer’s camera once she sat down in her arm chair at her Arlington home to begin speaking.

Bair also drew the curtain behind her to block out any potential distractions her audience might see through the window like passing cars. She had a framed picture of her church’s chapel to her left. And she spread out her Book of Common Prayer, her Bible and a printout of her sermon on her lap, couch and table ready for pick-up when needed.

Lights. Camera. Action. Everything was in place this Sunday morning March 22 as she prepared to conduct a live virtual service for her congregation at St. Michael’s Anglican Church in western Prince William County.

An ordained priest since 2011, Bair had never led worship this way before as the coronavirus suddenly limited people’s mobility and forced them to stay apart and yet adapt quickly without losing a basic staple of church life. But who had?

Everyone was figuring out ways to connect with their flocks on Sunday as well as during the week.

Some pre-recorded messages with their iPhone in an office room. Others livestreamed from their church sanctuaries, speaking to empty pews. Others held drive-through confessions during the week in the church’s parking lot. Zoom became a popular way for small groups and Bible studies to continue. Websites became more active in becoming the go-to place for updated information. And giving was reduced to two primary options: on-line or sending the offering directly to the church office.

This was all a work-in-progress with trial runs and constant tinkering. But there was no time to slow down, especially now with Easter on the horizon and no set timetable for when regular services will return.

Churches needed more than ever to become creative in their ability to adjust on the fly and provide a sense of community regardless of the physical barriers separating them.

Bair was no exception. She considered broadcasting from the chapel at Greenwich Presbyterian Church, St. Michael’s usual meeting place Sundays. But the internet connection wasn’t strong so she decided instead to live stream from her home.

Her elderly congregation of 45 is for the most part not tech-friendly. But with emailed instructions and the click of a button to YouTube, Bair simplified the process as much as possible to bring God’s encouragement, peace and wisdom in a time of unprecedented tumult. Everyone was in this together and there was no better moment than to confront the challenges before them.

With the exception of communion, it was in many ways a typical service. In just over 47 minutes, Bair delivered her sermon and read from the Book of Common Prayer while her congregation watched from their homes. She took great delight in seeing parishioners comment in the chat room section and they enjoyed seeing her.

Most of all, though, she enjoyed sharing God’s word with them.

“Everything about our world feels like it has changed,” Bair said. “But God has not changed. God is empathetic. He understands our fears and anxieties.”

“Our pastor does not avoid the hard topics that trouble most of us,” Bell said. “She jumped right into the hard topic of suffering. She based it on the reading from Job, who was a just person and suffered tremendously. It was helpful to hear how trusting God allows God to ‘walk with us’ as we walk through hard times.”

Even with buffering interrupting the service’s first 10 minutes every 20 to 30 seconds, Bell and her family adjusted.

“We coped by reading aloud along with the pastor, the pastor’s prayers and the congregation prayers,” Bell said. “We synchronized our voices with hers, which maintained continuity and a sense of connection.”

While some churches held live services, others taped theirs to ensure everything worked in case of a technical glitch.

‘It’s a whole different dynamic being in front of a camera instead of a full room,” said Tim Perrin, the pastor at Grace Baptist Church in Woodbridge.

Employing appropriate social distancing, seven people, including a sound person and a three musicians, came to Grace the Wednesday before its first virtual service March 22 to put things in place. They went through several takes before the camera man took the video home to edit it.

“We tried to test the waters,” Perrin said. “We had good responses from it. A lot of people from out of town. There were a lot more views than I thought. “

Immanuel Anglican in Woodbridge also taped its first virtual service for March 22. The church usually meets at Beville Middle School, but could not even broadcast from there because all schools are closed.

Instead, Rev. Tim Howe and Deacon Sallie Rathbone met in an office conference room on Old Bridge Road and recorded the service on an iPhone two days earlier. To allow for more room, including the addition of a keyboardist, Immanuel senior warden Richard Garon said the church used his home for its March 29 service.

In addition to coming together in some form on Sunday, churches are looking for ways to reach out during the week. At Bair’s suggestion, congregants volunteered to make one or two phone calls a day to others.

To navigate his church of 700 through this time, Perrin and his staff devised four goals he called Rhythms.

The first one focuses on the importance of regular worship through Bible study and prayer every day and reading Grace’s devotionals. The second is to grow in your faith instead of taking steps back. The third is looking for opportunities to serve and the fourth is connecting through things like small groups. Perrin said he has a point person to check on adults who need groceries or require other help.

“This could be a good thing where we don’t see ourselves as a building, but more as a body of believers and as the Church that Jesus died for,” Perrin said.

Immanuel will continue its Backpacks for Kids program. Started in 2017, the program provides weekend food bags for children who don’t have access to food over the weekend. During the school closure, Immanuel is working in conjunction with Coles Elementary School’s to-go meals by handing out weekend bags Fridays from 9-11 a.m.

“There are more needs, but still existing needs that need to be met,” Garon said.

Garon said Immanuel has yet to have a situation where someone needs a priest to come to the person’s home. But if that situation arises, Garon said it would be handled on a case-by-case basis depending on the circumstances.

“We’ve been recognizing that phone calls, Skype, and Zoom appear to be gifts of technology God’s given us to stay connected and to respond to needs in many instances,” Garon said.

In Gainesville, Holy Trinity, one of the largest Catholic churches in the Diocese of Arlington, has revamped certain rituals to meet its flock’s needs. At allotted times, priests meet parishioners in the back parking lot for drive-through confessions as each person stays in their car adhering to the six-foot social distancing recommendation.

Holy Trinity also changed the location of Perpetual Adoration from the chapel to the main church since there was more room.

In accordance with Virginia Gov. Ralph Northam’s ban restricting public gatherings to 10 or fewer people, people sign up online to participate in the practice of adoring the Blessed Sacrament.

“To go before the Lord and thank Him in a personal setting is so important,” said Vander Woude whose brother Tom is Holy Trinity’s head pastor. “Obviously we need to be careful and prudent. It seems like anymore we take things for granted. There’s more of a hunger to be with Him.”

John Peyton, the pastor of Reconciliation Community Church in Manassas, said his church of a couple hundred is still open for people to come if they have a need, whether that’s food or for a counseling session. Peyton is also making house calls as well.

“If an older person is feeling frightened, I will go and pray with them,” Peyton said. “I’m not afraid. We’re not shutting down the work of Christ … We’re here to answer the door.”

After meeting in person for their March 22 service at RCC, Peyton decided it was best to do the March 29 service strictly online.

“With how [the coronavirus] is spreading, it’s the right thing to do,” Peyton said. “They want to come together, but we’re doing this out of respect for the governor.”

RCC has a studio on site and Peyton used to do a radio show for 27 years.

“This is really no problem for us,” Peyton said.

Peyton said he plans to hold a Palm Sunday service April 5 by having people come in their cars to the church’s parking lot. RCC will have a sound system playing music and will hand out palms to people in their cars when they leave.

“The church is supposed to be a healing center, but I need to protect my members,” Peyton said. “I don’t want to push too far, But this gives them something to look forward to, something that’s close to normal.”