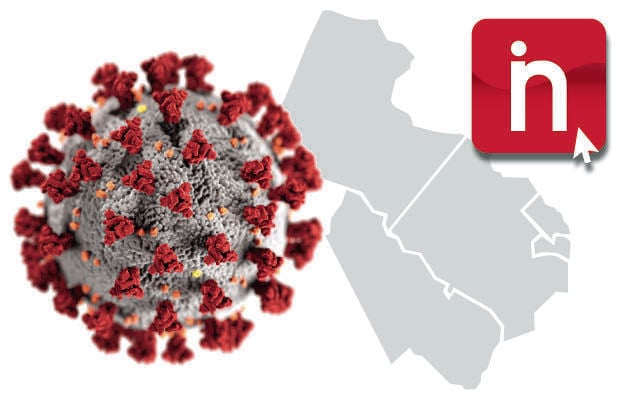 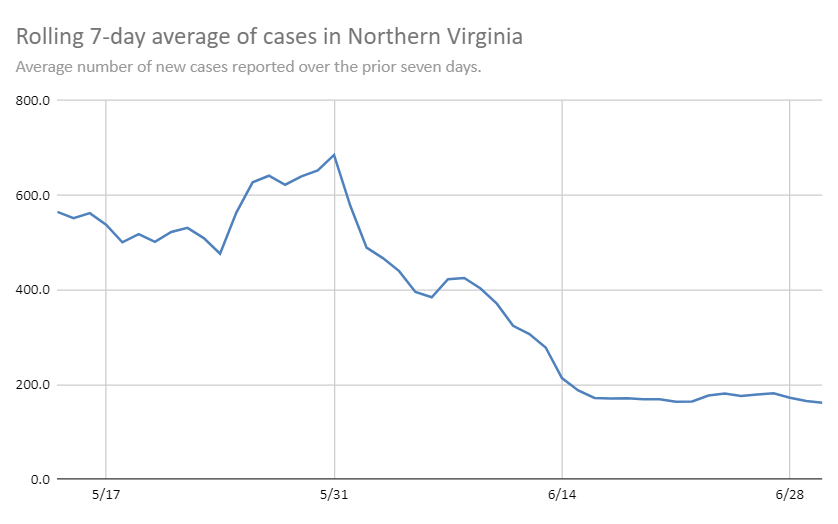 Northern Virginia's rolling seven-day average of new coronavirus cases is at its lowest level since early April, the Virginia Department of Health reported Tuesday, although Loudoun County officials are warning of a surge in cases among teens and young adults tied to a large group trip to Myrtle Beach, S.C.

The Northern Virginia region reported 154 new cases on Tuesday, with 107 of those coming from Loudoun and Prince William counties combined.  The region's average of new cases over the past seven days dropped to 161.7, the lowest it has been since April 10, when it stood at 153.1.

Statewide, 598 new cases were reported Tuesday, and hospitalizations statewide jumped by 106 patients to 902, the most since June 17.  Northern Virginia hospitalizations only increased by eight, however, so the bulk of the increase came from elsewhere in Virginia.

In a news release Monday, Loudoun officials said in the past week, 150 people between 16 and 18 had tested positive for COVID-19, and more than half of the county’s positive cases in that time period came from those 29 years old or younger.

Dr. David Goodfriend, the county’s health director, said “many teens and young adults are increasingly participating in activities that involve larger gatherings of people, such as beach week and other celebrations, which has increased their exposure to others outside their families.”

NBC Washington said Goodfriend is referencing a Loudoun County Beach Week event in Myrtle Beach that was responsible for about 100 of the positive cases. Goodfriend told the station that in talking with those infected and their doctors, the health department determined that hundreds of students had taken the trip together.

Northern Virginia now accounts for 50.8% of the state's total of 62,787 cases, the health department reported. Northern Virginia's share of the total cases, once nearly 60%, has been slowly declining in recent weeks.

The health department's COVID-19 data is updated each morning by 10 a.m. and includes reports by local health agencies before 5 p.m. the previous day.

*Provided by Virginia Department of Health

You blamed the increase on beach week LOL. You misspelled "due to idiots protesting".

Paris Jackson: My dad Michael Jackson used to 'tease' me over girlfriends

Nikki Bella on the verge of a 'breakdown' amid pregnancy