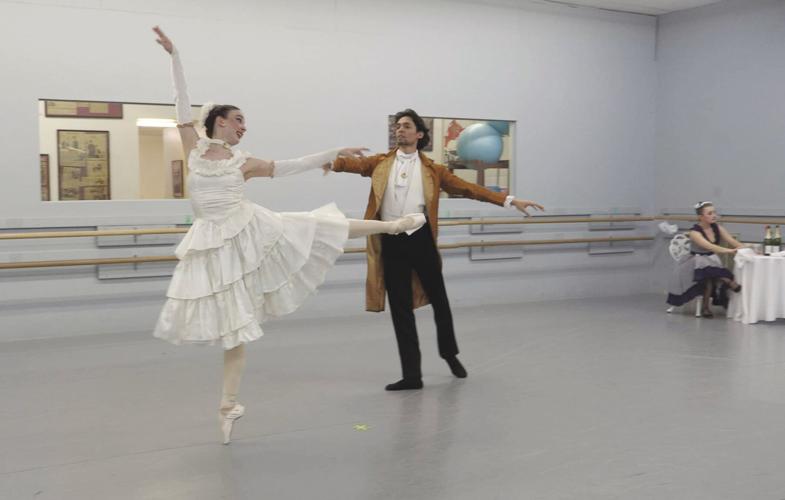 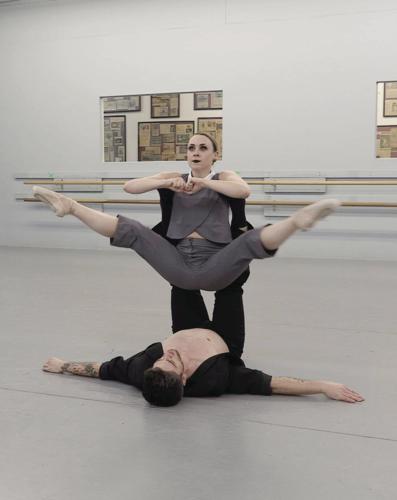 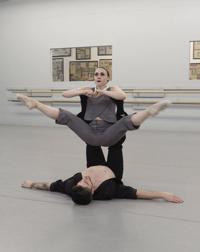 Kaitlin Frankenfield and Joshua Burnham rehearse a scene for "The Naked Truth," one of three ballets that will be presented this weekend as part of "Gaite Parisienne & More." 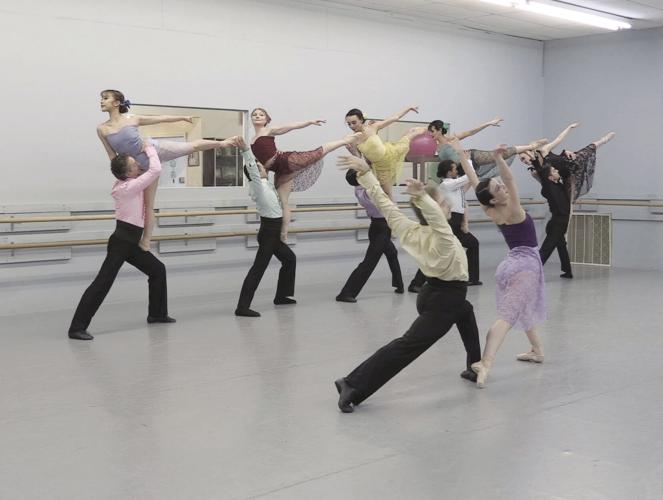 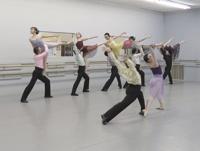 The Manassas Ballet Theatre will premiere two pieces along with a refreshed version of “Gaite Parisienne” during performances this weekend at the Hylton Performing Arts Center in Manassas.

A choreographer, leading female dancers and portrayals of resilient and independent women all will give a nod to March’s celebration of Women’s History Month.

“Letter to Maria” is the first piece in “Gaite Parisienne & More!” It is a premiere and the fourth choreographic work of dancer Debora Greer, who was inspired by the novel “The Perfume Garden” by Kate Lord Brown. The setting of “Letter to Maria” arises from the Franco dictatorship of Spain in the 1940s when a granddaughter finds mystery and lingering oppression in the ruins of a once-flourishing villa.

Greer translated one genre of art – literary – to another in the expression of dance. As Rosa, Kaitlin Frankenfield, with Joshua Burnham in a matching black costume, is joined by five couples adorned in mix-and-match colors to heighten the circling connections for the fiery “Libertango” scene. The strength to persevere with her passion is realized with a beautiful solo dance.

For his premiere, “The Naked Truth,” Ahmed Nabil’s choreography is a study of an 1896 painting by French artist Jean-Léon Gérôme, “Truth Coming Out of Her Well.” With intricate set, costume and dance designs, the audience will be brought into the art. “The Naked Truth” is Nabil’s second premiere for the Manassas Ballet.

In this ballet, the combination of white face masks and the conjuring of the Spinner characters have Frankenfield appear as another protagonist striving to maintain her power against the Lie, seduced by Burnham. Imagine the invisible force repelling two magnets pushed together. Legendary advice columnist Ann Landers’ quote might offer optimism: “The naked Truth is always better than the best-dressed Lie.”

Music director Christopher Hite is an integral part of the team creating both of these new works. Both Greer and Nabil consulted with Hite for music to complement their choreography. Appropriately for Rosa, an interlude and dance from “La Vida Breve” (“The Short Life”) by Spanish composer Manuel de Falla and “Libertango” by Astor Piazzolla were selected.

To help promote the refreshed performance of “Gaite Parisienne,” the second act of this weekend’s show, the ballet’s dancers took to the streets of downtown Manassas over the past few weeks in full costume, visited local businesses and posed for photographs. Many of the photos and videos were used in marketing materials for the event.

Ballet Master Vadim Slavitskiy staged the 1938 ballet with a newness to the choreography, which presents several independent women roles as they humorously interact with a variety of male suitors, while keeping their distance for “Gaite Parisienne.”

Fourteen scenes set to the capricious music of Jacques Offenbach – think can-can – will have the audience as exhausted as the final ensemble’s dancers are. The antics of the waiters and dancehall ladies border on upstaging the breathtaking choreography they encircle, with “a little bit of drama,” Slavitskiy said.

All three works, in which the ballet’s 21 professional dancers play multiple roles, will be accompanied by the Manassas Ballet Theatre Orchestra’s 34 musicians.

The Manassas Ballet Theatre's presentation of "Gaite Parisienne and More!" in March uplifted the spirits of human interaction and connection.

Duchess of Sussex 'learned so much' through Archetypes podcast

Jessica Biel feels she's 'being pulled in a million directions'