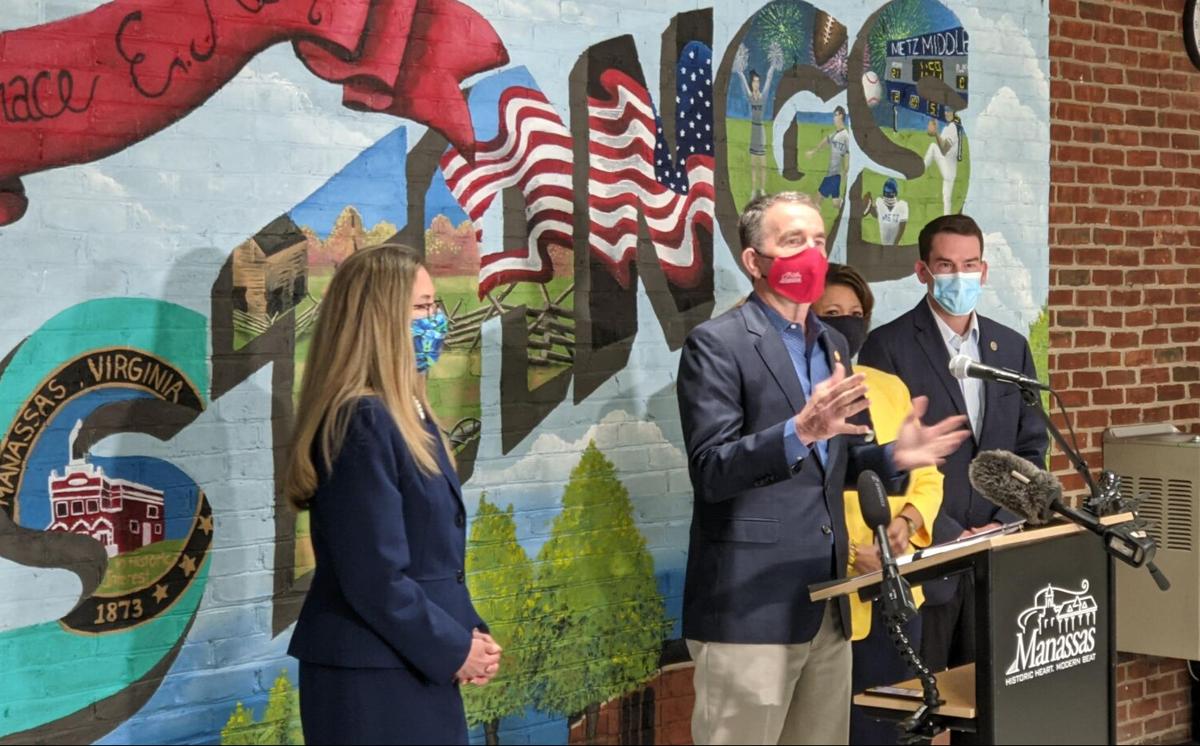 Virginia Gov. Ralph Northam addresses media members and others at the COVID-19 vaccine clinic at Metz Middle School in Manassas on Tuesday, April 13, 2021.

The Metz Middle School vaccine clinic, run by Walgreens, has the capability to administer 2,000 doses Tuesday and Wednesday.

Area residents were lined up before 9 a.m. for the COVID-19 vaccine clinic at Metz Middle School in Manassas on April 13.

Virginia Gov. Ralph Northam addresses media members and others at the COVID-19 vaccine clinic at Metz Middle School in Manassas on Tuesday, April 13, 2021.

The Metz Middle School vaccine clinic, run by Walgreens, has the capability to administer 2,000 doses Tuesday and Wednesday.

Area residents were lined up before 9 a.m. for the COVID-19 vaccine clinic at Metz Middle School in Manassas on April 13.

Manassas City’s first open vaccine clinic went off without a hitch Tuesday, despite the early-morning change in federal guidance regarding the Johnson & Johnson vaccine that sent planners scrambling.

With Gov. Ralph Northam visiting the clinic at Metz Middle School, roughly 700 doses of the Pfizer vaccine were being administered by Walgeens after a last-minute change from the single-dose J&J shots.

Northam, speaking to media representatives at the school, said the state would continue to follow the federal guidance, despite his own confidence in the Johnson & Johnson vaccine, which he and First Lady Pamela Northam both received last month.

Due to manufacturing troubles unrelated to the new FDA and CDC guidance, the state’s allocation of the J&J doses had already fallen from 115,000 last week to just 14,000 this week, so state officials were already working to fill the gaps with its allotments from Moderna and Pfizer, both of which require two doses three or four weeks apart.

“With this setback, it’s something [where] we’ll just have to look at the numbers of Moderna and Pfizer and make adjustments,” Northam said Tuesday morning. “And just the bottom line to all that, I tell my staff every day … we have to be flexible, because we’ve been fighting this virus for now over a year, and every day something occurs that we need to modify and make adjustments depending on that.”

Local residents were already lined up outside Metz before the clinic formally opened at 9 a.m.. Just about two hours earlier, the New York Times reported that the FDA was recommending withholding the shots because of a very rare blood clot condition that had developed in some recipients. About 6.8 million doses of the J&J vaccine have been administered in the country, and the condition has been reported in six people following vaccination.

That announcement sent city officials and Walgreens managers looking for a back-up. Originally, 2,000 doses of the J&J vaccine were allotted for the two-day clinic.

“I was lying in bed and I saw the CDC pulling Johnson & Johnson and I went, ‘No, this can’t happen,’” said Mayor Michelle-Davis Younger, who had originally pushed state officials for the clinic. “I jump on the phone, I get with [City Manager Patrick] Pate, he’s like ‘Yeah, we’ll figure it out, we’ll see.’ Next thing I know a text comes and says, ‘They got Pfizer.’”

James Satterfield, a regional director for Walgreens, said the pharmacy chain had enough Pfizer doses available in the area to “grab vaccines” from nearby stores, taking doses that weren’t already designated for other uses.

Satterfield said that the J&J shots are good for up to three months as long as they are refrigerated.  “Right now we’re being told to hold all doses until we get further information from the CDC.”

Outside the school, Philip Bolin said he didn’t think too much about the switch; it just meant that he and his 16-year-old son would have to return for their second doses in three weeks.

“We just went with it, what are you going to do? We’re not going to pick and choose,” he said.

As of Tuesday morning, city officials said about 700 people had signed up for doses Tuesday, and another 400 were registered for Wednesday. Officials said they have enough Pfizer doses to replace all 2,000 of the J&J vaccine that had been allocated, but so far only about 1,100 people had signed up, so that number could increase. Anyone 16 or older can sign up for the clinic.

The vaccines were provided free of charge, and city officials made a point to note that people were encouraged to bring identification and insurance information, but that neither was required. City communications staff deliberately reached out to churches and other groups that serve the area’s Black and Hispanic communities, reiterating that immigration status was irrelevant. Representatives from the immigrant services organization CASA were on site to answer questions and help Spanish-speakers navigate the process.

Bolin said it was a relief to finally get a vaccine, regardless of the type.

“It makes things safer, makes us a little bit more at ease doing things. But we’ll still be careful and we’ll still wear masks and everything,” he said. “We’re still planning to be safe, but the vaccine certainly helps.”

‘Ted Lasso’: Inside the Struggles & Triumphs of AFC Richmond in Season 2