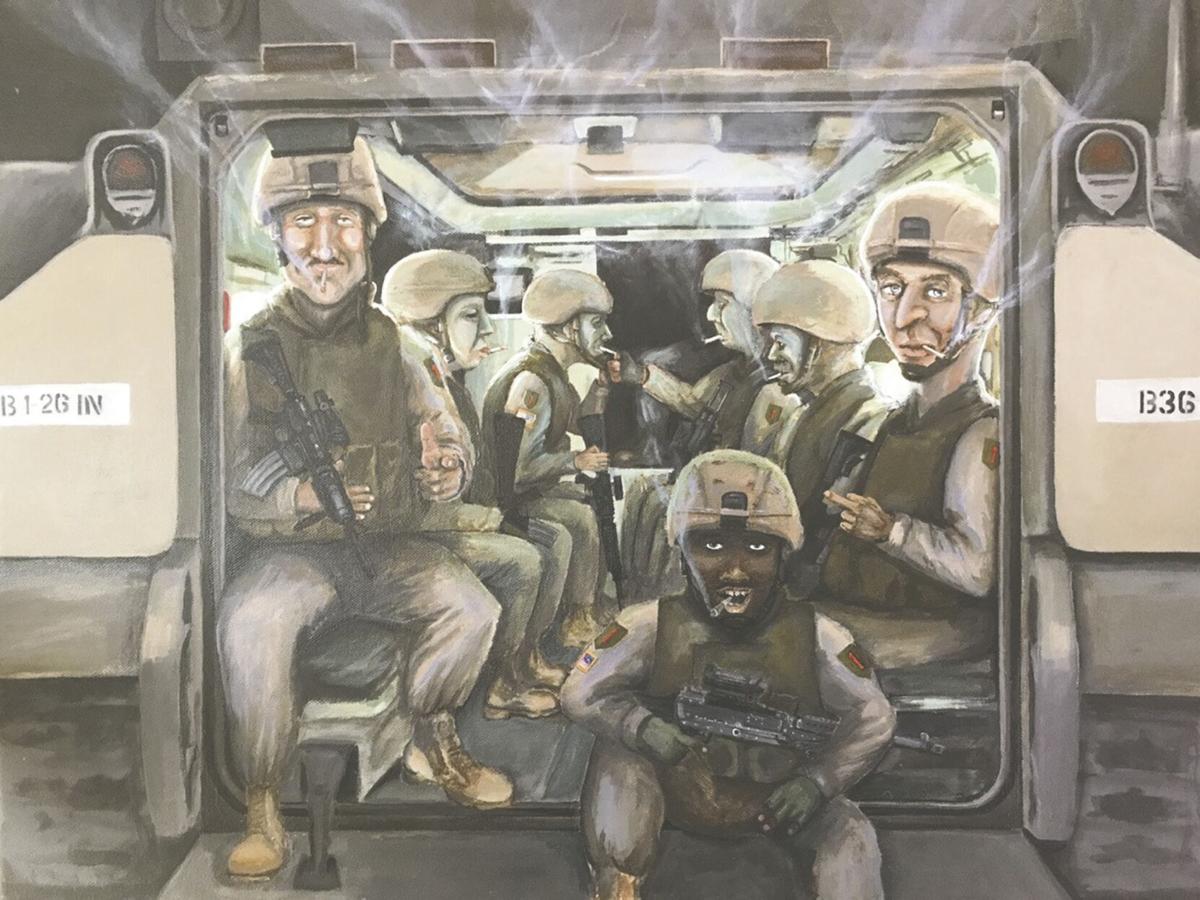 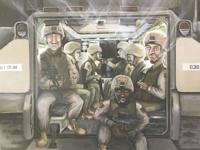 "Mother" is an oil on canvas painting by Matthew Pyle.

"My Basement Room" is one of Matthew Pyle's paintings that chronicle his experiences while deployed in Iraq.

"The Pharmaceutical Plant" by Matthew Pyle.

Workhouse Arts Center in Lorton, in collaboration with the Northern Virginia Regional Commission, provides programs for service members, families and caregivers with its Workhouse Military in the Arts Initiative.

Debra Balestreri, director of visual arts education for Workhouse, said the program is rooted in the desire to address the needs and improve lives through the arts. The initiative seeks to increase equity, access and opportunities for veterans to participate in quality arts programming that is sensitive and responsive to their unique experiences.

“When I took it over, I reimagined it and researched what would be necessary to bring in a mental health and therapeutic capacity,” Balestreri said.

The institute also offers an Artist in Residence program, which covers all costs for a studio for a current or former military member who is transitioning to becoming a visual studio artist.

The current military artist in residence, Matthew Pyle, joined the U.S. Army in 2003, and did a tour in Iraq with the 1st Infantry. After his enlistment, he went to school to learn how to write screenplays and said he wrote a “stupid romantic comedy that got turned into a Hallmark Channel movie.”

But his thoughts frequently returned to Iraq.

“The production budget for a war film is ridiculously expensive,” he said. So he started painting as a way to give those moments in Samarra, Iraq, and on patrol with his battle buddies in a Bradley fighting vehicle some permanence.

“We used to ride around for hours. If there was an IED, and they were calling for demolition teams to come, you might get stuck in the back of the vehicle for three hours, waiting,” said Pyle. “Coming from my American bubble, it was like being in a time-warp. Baghdad was a modern city, but the outskirts were stricter and definitely had more of a time-warp feeling.”

His acceptance as the Workhouse’s military artist in residence gave him the time he needed to learn how to paint the images burned in his memory. He had to practice for days to be able to paint his first soldier or palm tree or stray dog. For the soldiers, Pyle would photograph himself in the position of every soldier in the painting, so he would have references to scale and facial expressions, and then research photos showing each weapon in the angle it would appear.

“These paintings took me awhile,” Pyle said. “It’s a marathon, so what’s going to keep your attention? I knew that Iraq would keep my attention, because it was some of the craziest years of my life. Some of these paintings can take three months to complete.”

Pyle said the residency has been a wonderful experience, allowing him to work alongside other seasoned professional artists.

“I got along with everybody and the neighbors in my studio were really helpful – I didn’t even know how to hang a painting at first. Getting feedback from experienced artists was amazing,” said Pyle. “I did get to host a couple of open studios, where the art therapist asked if I’d host a class, so I did a portrait painting class.”

He said he may paint moments from World War II and Vietnam next.

Balestreri said artists in residence are asked to spend their year working toward a robust solo exhibition at the end of their program.

Because the pandemic closed the studios, Workhouse granted Pyle an extension of his one-year residency. Pyle is now completing his final works and preparing for his exhibition before his time at Workhouse ends in July.

Ballestreri said Workhouse is now looking for its next military artist in residence. The application process is similar to that for other residencies and includes submitting a statement of the artist’s work and some examples to a jury.

“They are judged on their talent, career, professional practices, as well as their content or skill levels,” she added. “We’re always looking for that next person.”

To learn more about the Workhouse Military in the Arts Initiative, visit workhousearts.org/wmai/ or facebook.com/workhouseMAI.