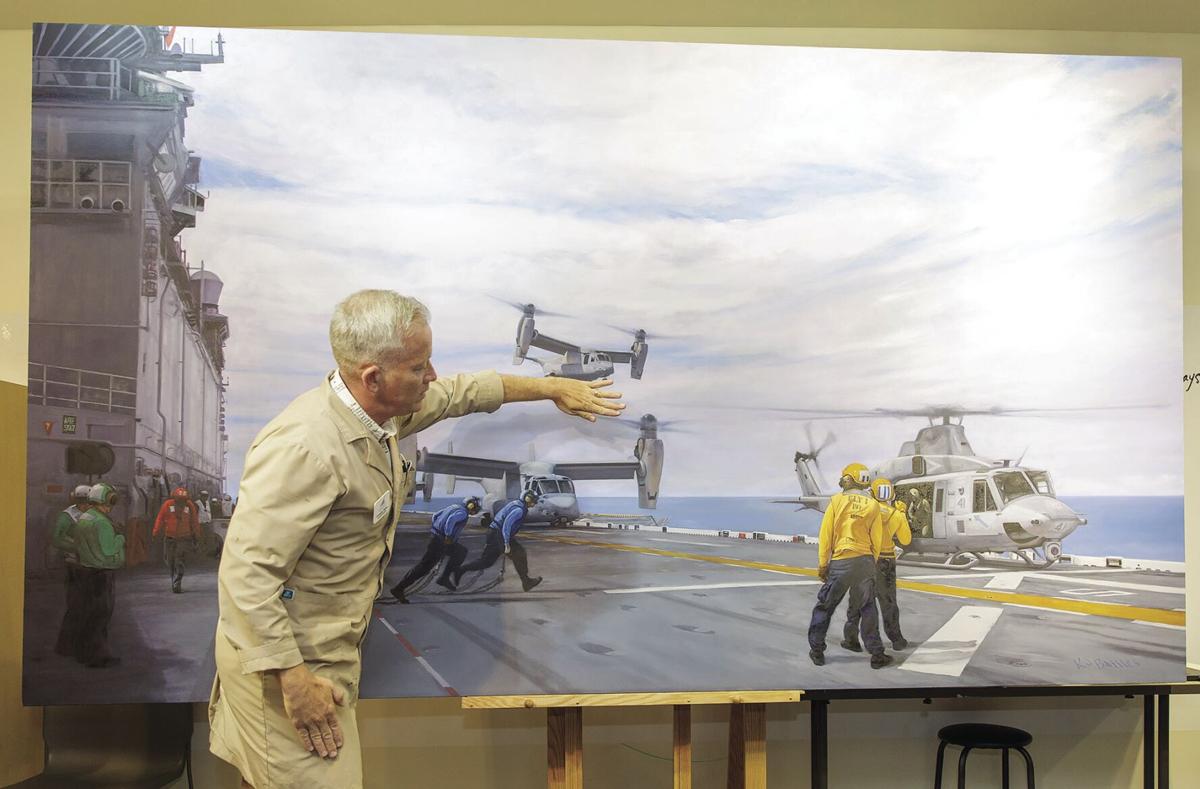 Kristopher Battles, artist in residence at the National Museum of the Marine Corps, explains details of his largest canvas painting, portraying flight operations aboard the USS Bataan. 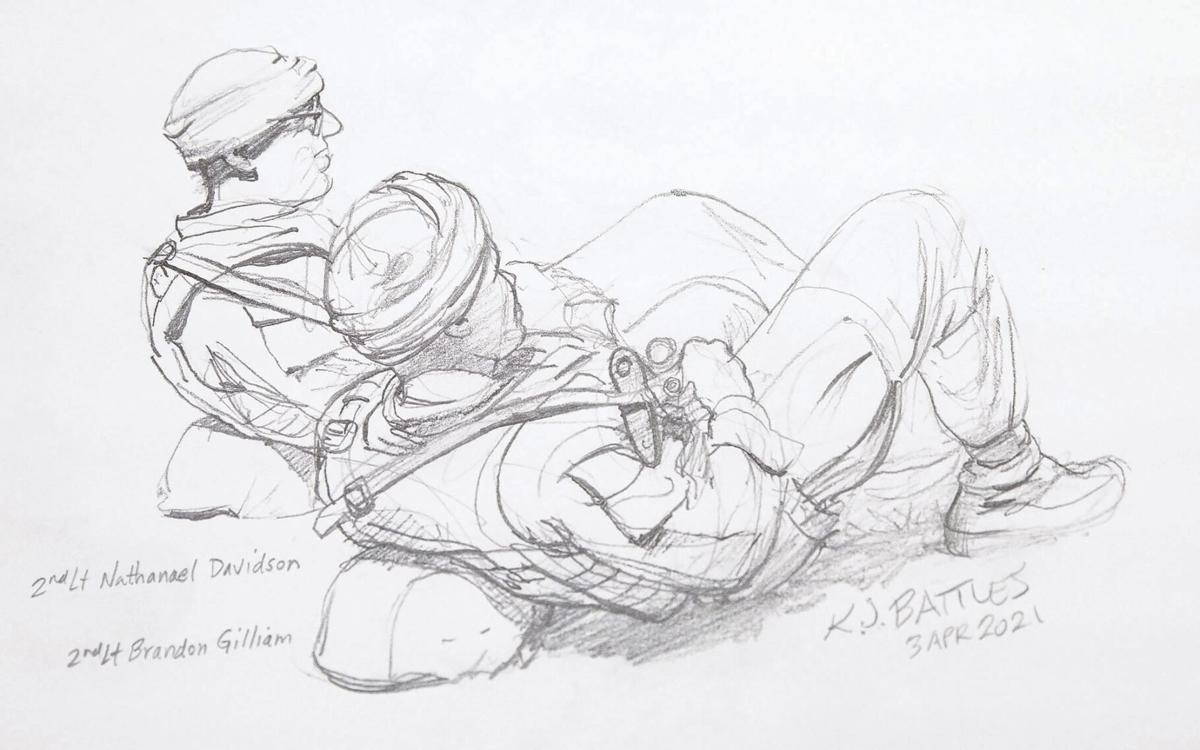 A pencil sketch of two Marines resting by Kristopher Battles, from his time with troops in Camp Johnson, N.C. 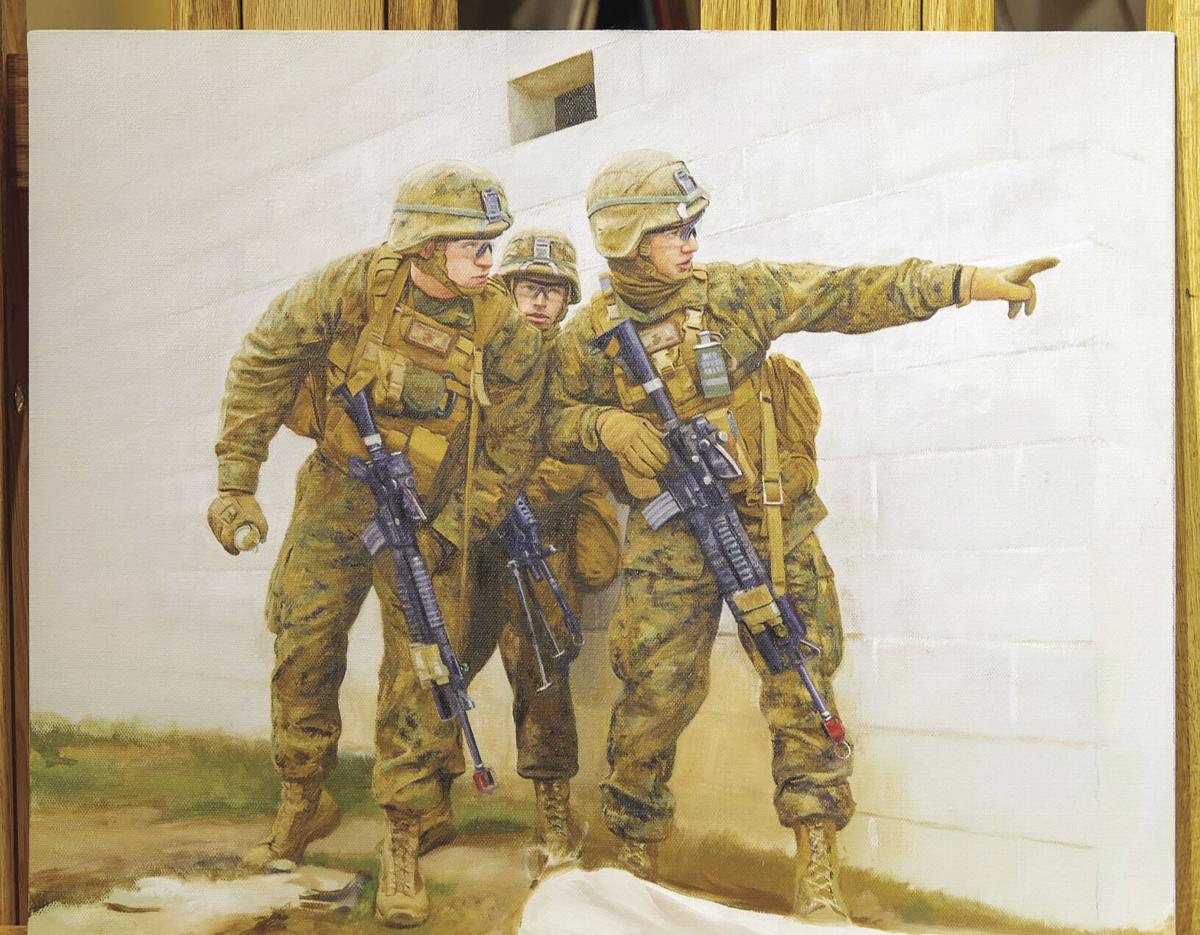 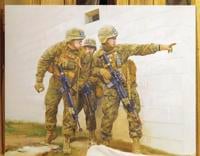 "Smoke Grenade Deliberation," an oil on canvas by Kristopher Battles portrays the Basic School at Quantico and shows Second Lieutenants during their military operations on urban terrain training.

At the National Museum of the Marine Corps in Triangle art is not only on display but it’s also being actively created on the second deck. That’s where you’ll find the studio of Kristopher Battles, the Marine Corps’ artist in residence.

Battles worked with computers and public affairs as a Marine Corps Reservist from 1986 to 1996, while he drew and painted on the side.

“When I was a young [private first class], I would see historical illustrations by Col. Charles Waterhouse on every base I was at, and I was amazed by the art, but never thought I could be a combat artist,” Battles said. “I remember thinking, ‘I wish my recruiter had told me about that job.’”

Battles left the Marine Corps Reserves and studied art at Northeast Missouri State University (now called Truman State University). He graduated with a bachelor of fine arts with a degree in studio art, and an emphasis on painting. Along the way, he had to supplement his art income by waiting tables and working as a bank teller. But an email he received one day changed his life.

“I read that there’s a Marine doing combat art, Chief Warrant Officer Michael Fay, so I emailed him and told him I had been a former Marine and was now an artist,” Battles said. “He wanted to see some of my work, and he shared it with the director of the Marine Corps’ History Division.”

The division colonel asked whether Battles wanted to re-enlist.

“I was 38 at the time, and swore in 20 years, one month and one day after my initial enlistment,” he recalls. “Within a month I had orders to Quantico.”

Battles was mobilized to active duty in September 2006; a month later, he was sent to Iraq for a three-month deployment.

Even though he was a combat artist, Battles said, he understood his priority was as a member of the squad.

“Your first goal on a patrol is to be an asset,” Battles said. “But as an artist, I’m also noticing how things glimmer, and how the sand looks when it’s kicked up, and how the sunset looks across the desert. I was looking both tactically and artistically.”

In addition to his normal gear, he also carried a bag with a sketchbook, watercolors, pens and a camera. “I’d be walking around taking as many sketches as I could, but I was also taking photographs – especially on patrol. There’s no opportunity to sketch on patrol, because your head’s on a swivel.”

Battles deployed overseas several times to create art for the Marine Corps, serving in that role until 2014. He then was a civilian combat artist for the Naval History and Heritage Command in Washington before becoming the Marine Corps’ museum’s first artist in residence in December 2019.

Dominating his studio at the Marine Corps museum is a large, 6-by-10-foot oil painting of flight operations on the deck of USS Bataan, an amphibious assault ship. Battles began that years ago when he was working for the Navy.

“This is one of the biggest things I’ve ever painted,” Battles said. “We’d go out each day and get sketches of the Ospreys and crewmembers. Working on something this big is quite a challenge,” adding that he jokingly refers to the stunning painting as “Battles’ Folly.”

Museum Director Annie Pardo said she is delighted to have Battles as the first Marine Corps artist in residence.

“His immense talent and contributions to the combat art collection are critical in documenting the history and accomplishments of Marines,” Pardo said.

Battles manages the combat artist program for the Marine Corps, which involves helping to recruit, train and equip uniformed and civilian artists and send them out on assignments. He is also responsible for portraying key moments in Marine history.

“I am now creating a series of historical images of Marine campaigns and battles, such as Fallujah and Najaf, showing America what their Marines did during the Global War on Terror,” Battles said.

“Like the new galleries we’re constructing here at the museum, I’m going to continue telling that history with paintings, so when a young Marine sees my work years from now, they’ll learn Marine Corps history,” he added. “These paintings will tell the Marine Corps story, and inspire Marines and families about what they do.”