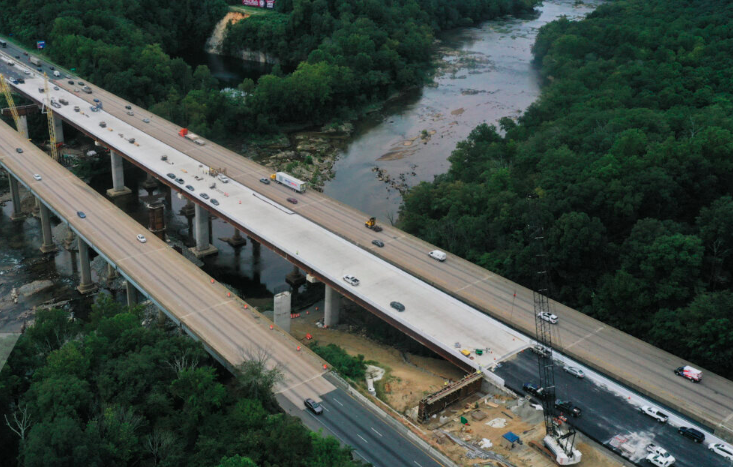 Photo of the new span over the Rappahannock River by contractor Wagman. 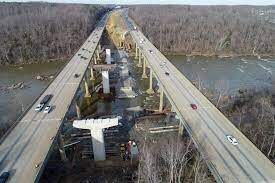 Construction on the second span on Interstate 95 at the Rappahannock River.

Photo of the new span over the Rappahannock River by contractor Wagman.

Construction on the second span on Interstate 95 at the Rappahannock River.

Six southbound travel lanes will cross the river, marking a significant milestone in the construction of the $132 million I-95 Southbound Rappahannock Crossing Project, the Virginia Department of Transportation says.

Construction on the southbound crossing began in August 2018 and is tracking to be completed five months ahead of schedule this December.

The existing southbound bridge will carry local traffic between exit 133 (Route 17) in Stafford County and exit 130 (Route 3) in the City of Fredericksburg. Through traffic, or travelers with destinations south of Fredericksburg, will use the new bridge. Nearly 150,000 vehicles a day traveling on I-95 near the Rappahannock River, VDOT says.

The I-95 Northbound Rappahannock River Crossing project will build additional northbound travel lanes between the same interchanges. Construction began in summer 2020, and new lanes will open to traffic in early 2024.

Both Rappahannock River Crossing projects will connect with 95 Express Lanes, which are being extended over 10 additional miles in Stafford to the Route 17 area. Construction continues on 95 Express Lanes Fredericksburg Extension Project. The project is building three new access points to express lanes at exit 148/Quantico, exit 140/Courthouse Road and at exit 133/Route 17.

To prepare for the new traffic pattern at the new bridge span, lane closures are scheduled on I-95 southbound over 19 hours between Tuesday and Wednesday between exit 136 (Centreport Parkway) and exit 130 (Route 3) interchanges. Crews will be milling and paving, and will uncover new overhead signs that will guide drivers through a new decision point for separate local and through traffic lanes, VDOT said.

Work is scheduled to begin at 7 p.m. Tuesday, and VDOT encourages motorists to use an alternate route Tuesday evening through early afternoon Wednesday, especially for destinations outside the Fredericksburg area. In the event of inclement weather, this work zone will be rescheduled to occur the following week from 7 p.m. Tuesday, Oct. 18, until 2 p.m. Wednesday, Oct. 19.

All lanes of I-95 northbound will remain open during the traffic shift.

When all I-95 southbound lanes reopen at 2 p.m. Wednesday, Oct. 13, traffic will be divided between local and through lanes over Route 17 and the Rappahannock River. To reach local interchanges, including exits 133 and 130 and the Safety Rest Area and Welcome Center, motorists need to remain in the right lane.

All three I-95 southbound through lanes will be open for drivers with destinations south of Fredericksburg. Through travelers will need to stay in the three left-most lanes.

Separated southbound local and through traffic will then merge back together south of Route 3 in Spotsylvania County and continue on existing I-95 southbound.

For I-95 southbound traffic exiting to Route 17, northbound and southbound, the off-ramp at exit 133 will remain a single lane. The interchange loop ramps will remain closed until late 2021. Temporary traffic signals on Route 17 will continue to direct traffic entering and exiting I-95.

In late 2021, the Route 17 southbound to I-95 southbound ramp will be widened to two lanes. When this occurs, the local travel lanes near this interchange will be expanded from a single lane to two travel lanes spanning Route 17.

All local traffic will enter into three travel lanes before the bridge over the Rappahannock River.

For motorists approaching the Route 3 interchange in the local lanes, be aware that three travel lanes will be reduced to a single lane after the Cowan Boulevard overpass, at mile marker 131, until south of the exit 130 interchange. This temporary traffic pattern will be in place for an estimated 3-4 weeks, at which time a second lane under the Route 3 overpass will open.

Through lanes will also be in a temporary traffic pattern in this area, reduced from three to two lanes before merging with local traffic in the three existing lanes of I-95.

The temporary traffic pattern is necessary to allow crews to finish construction near the Route 3 overpass, VDOT said.

Crews anticipate opening all local and through lanes near the exit 130 interchange by December.

Kate Beckinsale: I have a very high IQ