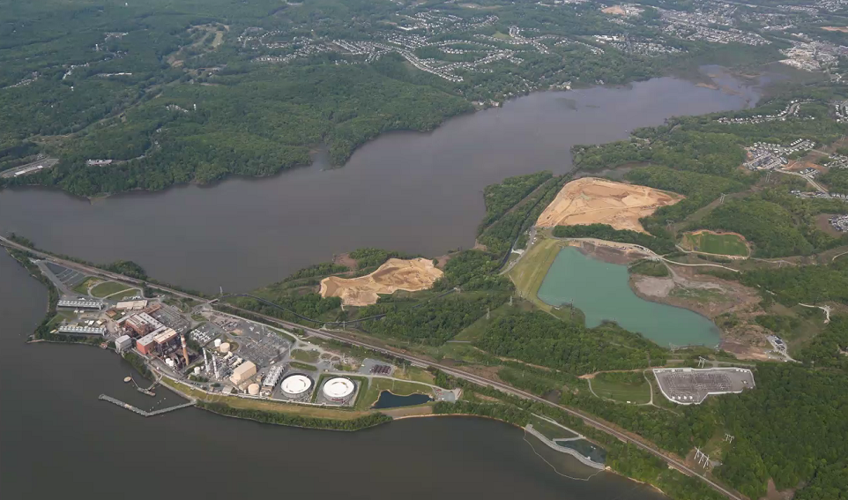 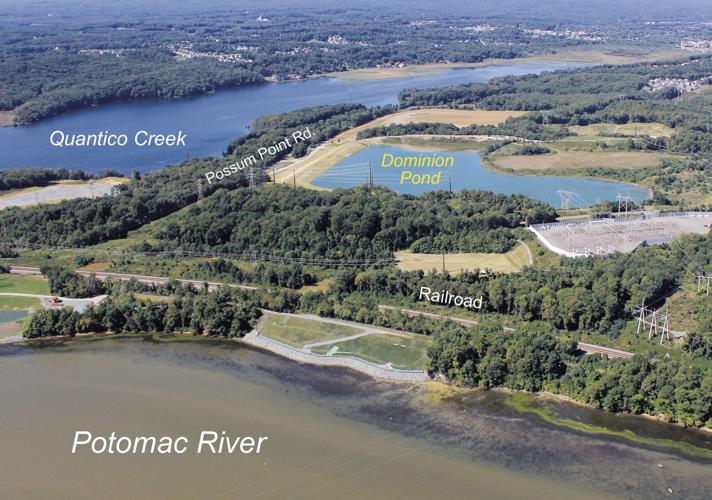 The current coal ash pond at Dominion Energy's Possum Point Power Plant site is seen in this aerial photo taken in September. Dominion's proposed landfill would be just west of the pond site. The power plant itself is along the Potomac River, just outside the photographed area. 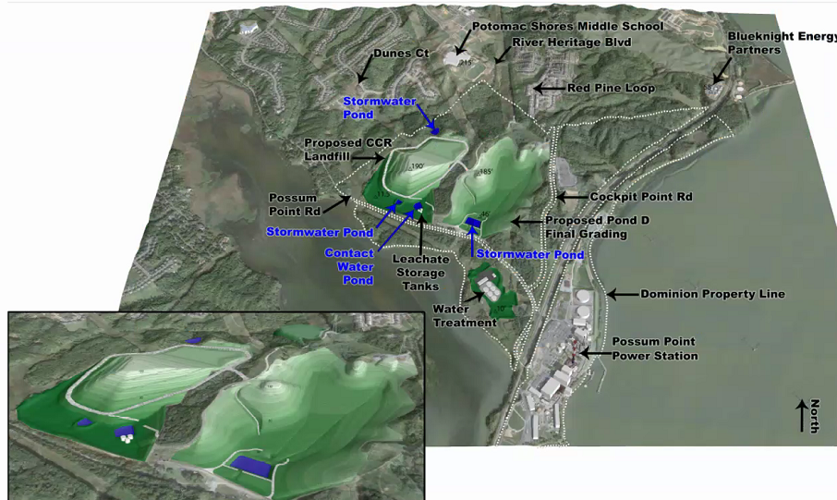 This rendering provided by Dominion Energy officials shows the proposed location of the landfill on the western edge of the Possum Point site.

Dominion Energy’s plan to build a landfill to bury coal ash at its Possum Point Power Station on Quantico Creek is already running into opposition, although one local official says the plan could lead to one of the most valuable redevelopment opportunities in the region.

Prince William Board of County Supervisors member Andrea Bailey, whose Potomac District includes the site, told InsideNoVa this week she opposes the landfill, even though she helped to organize the Jan. 20 community meeting at which Dominion officials announced their plan.

Bailey said she “wasn’t expecting what they presented” and she was not in favor of the landfill. She said Dominion needs to create a different vision for the property.

“I think Dominion is recommending this because it is the most inexpensive way to solve the problem,” she said. “Inexpensive is not always the best when you’re talking about human lives.”

Bailey said the county is forming a task force for residents in the area to work with Dominion. Ultimately, the company will need signoffs from the state on a slew of environmental regulations and inspections, as well as approval from the county.

State Sen. Scott Surovell, whose current 36th District includes the plant site, said the plant is likely to close eventually, so the county should work with Dominion to redevelop the land, which he called “one of the most valuable redevelopment opportunities in all of Northern Virginia.”

Dominion said it was essentially given three options by the state after former Gov. Ralph Northam backed and signed a state law requiring disposal of coal ash to protect groundwater: Dominion could have the ash recycled, could deposit it into an onsite landfill, or could ship it to a different landfill. For the roughly 4 million cubic yards of coal ash at its Possum Point Pond D, Dominion says the first option is the most cost-effective and least impactful for the surrounding areas.

The company says the landfill on its Possum Point property would be “above and beyond” state regulations, with a double lining that should last for over 400 years and be planted over, after draining and filling the current ash pond.

The estimated cost of $374 million could be partly passed on to energy consumers in the state, as is allowed in the 2019 legislation, sponsored by Surovell, Dominion’s Spencer Adkins said during the virtual public presentation.

“We’re going the extra mile here; we’ll take the next step to make sure that there’s no issues with our system,” Adkins said.

The state law was passed to prevent the carcinogenic heavy metals in the ash from seeping into and polluting groundwater, a growing concern for disposal ponds around the country. A ceremonial bill signing was held at Possum Point in 2019 by Northam. At various times, Dominion operated five different ash ponds at the power plant, but the utility consolidated all of them into Pond D after ceasing coal burning at the power plant in 2003.

Now, the company is faced with what to do with the ash at the Prince William site, along with at three other locations in Virginia. Originally, the utility planned to drain the pond and cover it with a synthetic cap and topsoil, but the single liner at the bottom of the pond doesn’t meet the new state requirements. Of the options under the new law, Dominion has told state regulators that it would like to go the onsite route, although the state could request a different route.

Adkins said the onsite landfill option would be the cheapest, quickest and least disruptive for nearby residents. Transporting the ash to an offsite landfill would require years of heavy truck and rail traffic through the residential neighborhoods near the plant, he said.

Transporting the ash to be recycled – likely for cement replacement – would require the same amount of trucking, and only about half the ash at the site could actually be reused.

The landfill plan could face opposition from nearby residents. Adkins said the nearest home is about 700 feet from the proposed landfill site just northwest of Pond D.

But once the transfer is complete and the landfill is covered with topsoil, he said, people in the area wouldn’t even be able to guess what is underneath. All told, after permitting and construction, Adkins said, the landfill should take about eight years to finish.

“We’re trying to make it blend in with the area, so I think once we get done with it, people won’t even realize,” he added. “They’ll just think it’s a small mountain or a hill with the grass growing.”

Bailey said she hoped Dominion could land on a “win-win” for the community nearby.

“I just wanted to make sure that everyone had an opportunity to look at the presentation and to digest it,” she said during the meeting. “Your voice will be heard totally and in communications, not only with you but also Dominion.”

The state law requires Dominion to recycle at least a quarter of the coal ash it has at four sites across Virginia, but the utility company has indicated that it’s most likely to fulfill that requirement through the ash it has stored in Chesterfield County.

Additionally, Surovell noted, because of the 2020 Virginia Clean Energy Act, Dominion will have to produce all of its energy in Virginia from fully renewable sources by 2045, leading some to speculate that the plant won’t be in operation at all for too long. Surovell said that creates an opportunity for the county.

“I think it’s highly unlikely that there’s going to be a power station there in 15 years,” Surovell said. “That property’s going to need to be repurposed, the vast vast majority of it. And I think the Possum Point power station is probably one of the most valuable redevelopment opportunities in all of Northern Virginia.”

Surovell said it might be short-sighted for Prince William to reject the landfill proposal. Instead, for the landfill to gain approval, the county could ask for certain proffers from Dominion related to the land where the power point is located.

If Dominion does ultimately decommission the power station, the county could redevelop the land adjacent to the landfill for public use. Surovell pointed to Arlington County’s building Long Bridge Park atop what was once a toxic brownfield and Alexandria’s plans for redevelopment of the Potomac River Generating Site as examples of what Prince William could seek.

New landfills need to be approved by the county and the plan for recycling coal ash will need approval from the State Corporation Commission, whose primary directive is to minimize impact on ratepayers. But according to Surovell, if the county forces Dominion to go the more expensive route of shipping the coal ash away, the SCC could suggest the company redevelop the land on its own to offset the costs, with less input from the county.

“As far as I know, the Prince William County Board of Supervisors has not articulated what their long-term vision is for Possum Point. And there’s a lot of opportunities there for parks, housing, for a waterfront village, for water access, etc,” Suovell said.  “The easiest way to mitigate that [cost] would be to develop the hell out of that property.”

But he said that the county has so far dragged its feet in coordinating a working group of community members, residents and other interests to discuss what the land could possibly be used for if it does eventually wind up in the county’s possession.

“There’s a lot of opportunities there for parks, housing, for a waterfront village, for water access.”

The article leads one to believe that PWC board and the community will be making the decisions here and I don’t believe that will be the case. Senator Surovell sounds like he and Dominion have their own plans. They are the puppeteers and PWC are the the puppets. Looks like the Senator has laid the plan out very clearly and at the same time clears himself from blame on the final decision. He knows damn well the citizens of PWC and the board are powerless against he and Dominion.

Wheeler and the gang will welcome this with open arms. Without dominion they cannot wall off the battlefield with data centers. Who cares about the coal ash as long as it's where the not elite live.

The CSX railroad runs right through Possum Point. There should be no need to use dump trucks to transport the coal ash for recycling or to a remote landfill.

Burying toxic coal ash beside the Potomac River is environmentally foolish. This site will eventually be inundated by the river, and a future earthquake could rupture the double liner within its alleged 400-year lifespan. The buried toxins would pollute the Chesapeake Bay, sooner or later.

What is that black "stuff" in the Potomac along the shore in the second photo? Ever seen coal ash from a power plant? It's a gooey black mess when its waterlogged.

I want to make a difference and inspire, says Normani