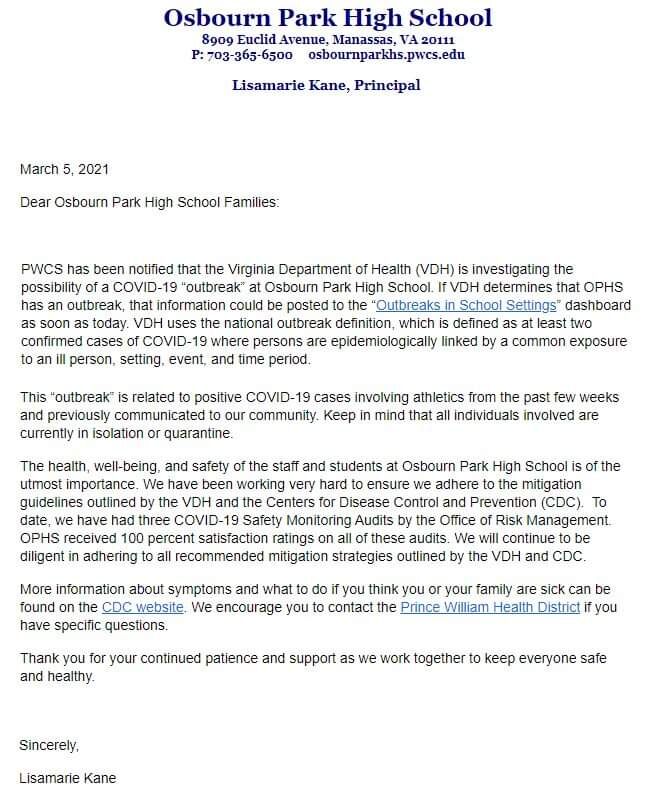 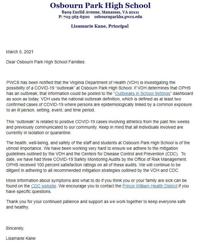 In a letter to families Friday, Osbourn Park Principal Lisamarie Kane said the potential outbreak is linked to positive coronavirus cases "involving athletics from the past few weeks." All of the cases were previously reported to the school community and all individuals involved are currently in isolation or quarantine, Kane said.

The Virginia Department of Health defines an “outbreak” as two or more cases where transmission occurred at the same location. Osbourn Park, like all other middle and high schools in the division, had been virtual-only all year until last week.

Prince William County schools spokeswoman Diana Gulotta said the division was notified last week of the possibility that the potential Osbourn Park outbreak would become official with its posting on the VDH "outbreaks in school settings dashboard."

As of Monday morning, however, it continues to be an investigation into a potential outbreak and had not been listed on the VDH dashboard.

So far, VDH has identified four outbreaks at county public schools. The health department was notified of an outbreak at Charles J. Colgan High School Dec. 30. Fannie Fitzgerald and Montclair Elementary Schools both reported outbreaks Jan. 27. Brentsville High School reported an outbreak Feb. 10. None have resulted in deaths and all four are considered “pending closure” by the state.

With all students who chose to return to in-person learning back in the classroom on a part-time basis, Prince William County Public Schools t…

Private schools have been back in school longer and have more cases. Public schools just went back and are already seeing cases. Doesn't mention if they have symptoms, but I wonder if the parents are having second thoughts?