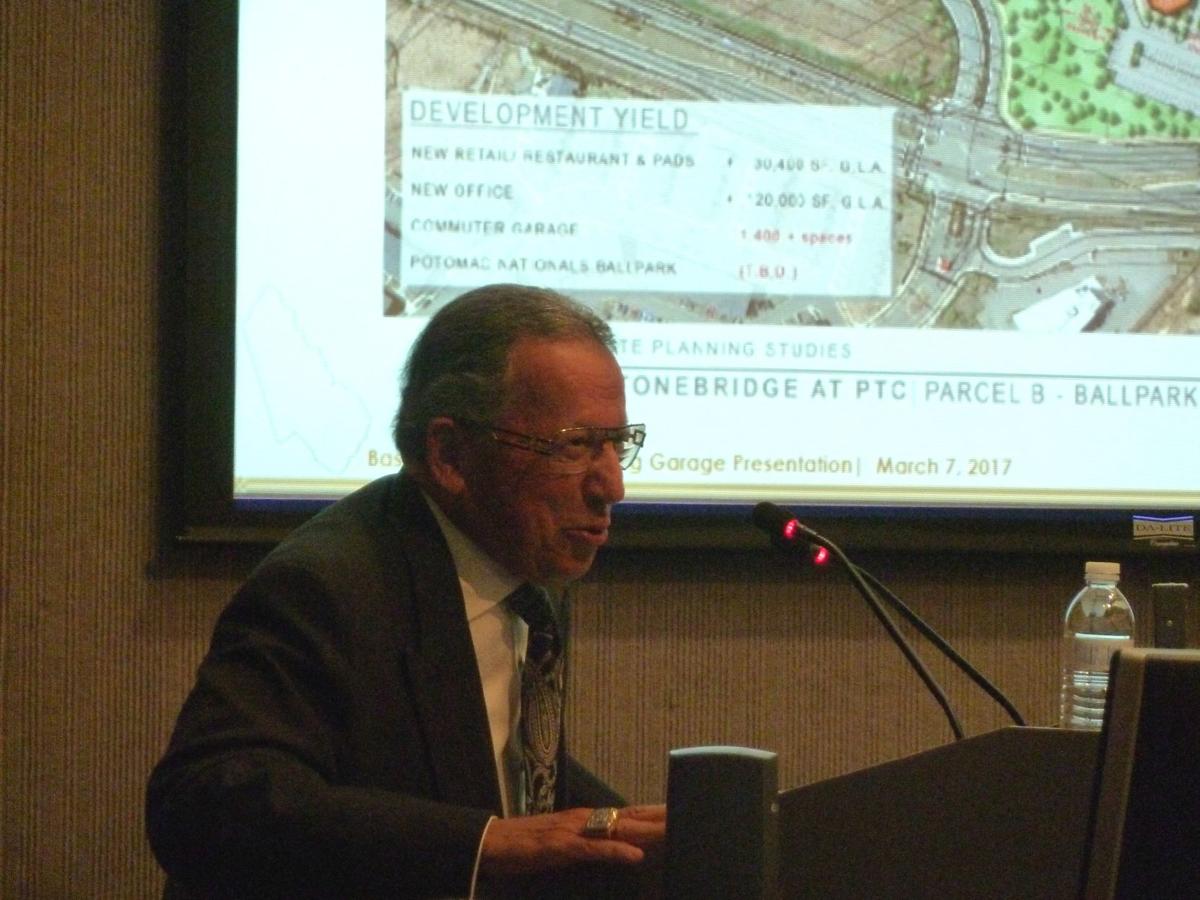 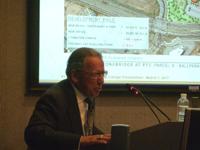 Art Silber, owner of the Potomac Nationals, during a presentation on a proposed stadium for the minor league baseball team, March 7, 2017. 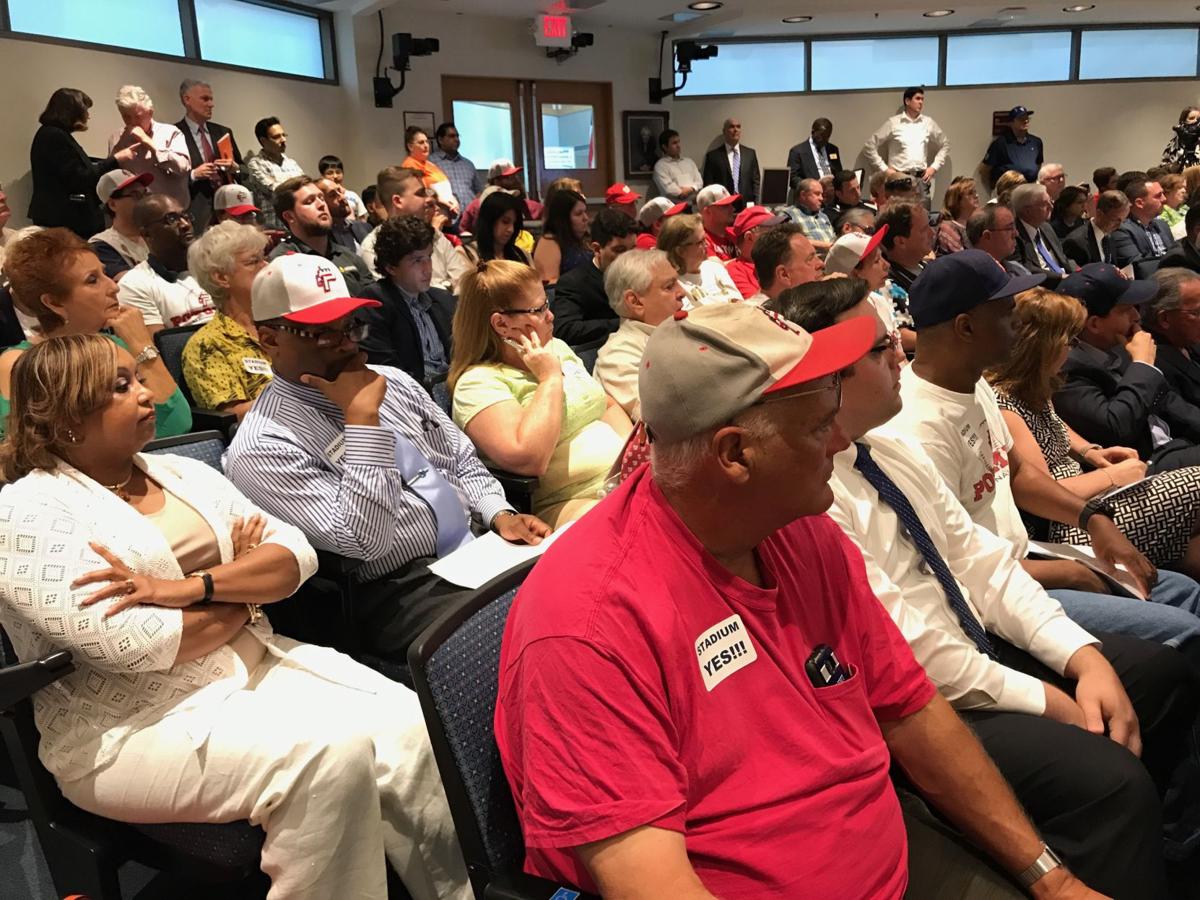 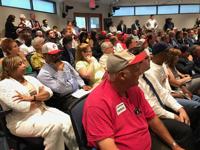 Potomac Nationals fans await a June 20 vote from Prince William County supervisors on whether to send a proposed deal for a new stadium to a Nov. 7 ballot referendum.

Art Silber, owner of the Potomac Nationals, during a presentation on a proposed stadium for the minor league baseball team, March 7, 2017.

Potomac Nationals fans await a June 20 vote from Prince William County supervisors on whether to send a proposed deal for a new stadium to a Nov. 7 ballot referendum.

Prince William County supervisors are currently set for a public hearing and vote on a deal that would bring a new Potomac Nationals stadium to Woodbridge, but there’s one big problem with that plan — the team doesn’t want to see it happen.

P-Nats owner Art Silber declared in June that the minor league baseball team needed a signed contract with the county on a plan to replace the aging Pfitzner Stadium before the end of July, or else he’d be forced to sell the ball club to an out-of-state buyer. The board voted downa chance to send the $35 million stadium to a November ballot referendum largely because of that deadline, and supervisors planned to finalize an agreement on the deal at their July 18 meeting.

But now Silber’s changed his tune, urging supervisors to delay a vote on the deal for a couple weeks to let negotiations continue.

“Frankly, there’s no point in even doing the vote, because we don’t have an agreement that we would sign,” Silber said in an interview. “If they vote, they’re going to vote on something that’s completely irrelevant.”

Silber declined to discuss the sticking points of the negotiation, only saying that the terms of the proposed deal now include terms team officials believe would be “suicidal business-wise and would create tremendous risk” for the ball club. Under the deal’s original conditions, the county would use its Industrial Development Authority to issue bonds to raise money for the stadium’s construction, then the team would pay the county back for that debt over the course of a 30-year lease.

“The terms of that agreement have got to be fair, and if they’re not, we’re not going to move ahead with the deal and will take advantage of all the options available to us,” Silber said.

Those options include “looking at other areas in Northern Virginia like Loudoun or Fairfax,” Silber said, or starting up negotiations with other potential buyers in North Carolina.

Supervisor Frank Principi, D-Woodbridge, said he’s certainly willing to wait a bit, as he feels a July 18 hearing would be “premature.”

“The sequencing just seems out of whack, and this deal is not ready for prime time,” Principi said. “There have been material changes to the terms, and that requires changes to multiple contracts and agreements. It’s like the tentacles of an octopus.”

Like Silber, Principi declined to discuss how the deal has evolved or what prompted this hiccup. He acknowledged that the board would not face this conundrum had Silber not issued his July “ultimatum.” But he also stressed that the team has yet to even sign off on some of the deal’s provisions.

“There’s still a ways to go here, so I see no gain out of any of this by simply passing on a one-sided draft lease agreement,” Principi said.

At the board’s July 11 meeting, Principi proposed moving the vote to Sept. 5, a date that Silber said would be acceptable to the team. But Principi was the only supervisor to sign off on that change, as his motion failed on a 6-1 vote — At-Large Chairman Corey Stewart didn’t attend the meeting.

Opponents of the stadium deal, like Supervisor Pete Candland, R-Gainesville, are intensely skeptical about Silber’s push to delay a vote. He believes these entreaties from the team are just “delay tactics” and that this latest change gives him “real concern about the integrity of the whole deal.”

“If they’re saying they want to extend this negotiation to later than July 18, it’s clear this was never a real deadline to begin with,” Candland said. “It’s clear it was a threat to get the board to vote against a public referendum.”

He wants to “take Art Silber at his word” that he needs an answer before the end of the month and keep the vote on the schedule for July 18. After all, he believes that the deal hasn’t fundamentally changed in the last few weeks, and he’s “gotten used to” Silber’s threats to move the team and largely discounts them.

“It was predicted by many of us that we’d see this deadline go away once the referendum is off the table,” Candland said. “I expect we’ll see a lot of work by people on the board to delay this, because they’re worried they don’t have the votes to pass it.”

At the July 11 meeting, supervisors generally agreed with Candland’s argument, suggesting that the board could always hold the public hearing as scheduled, then defer action.

“Theoretically, if we’re given a compelling reason to defer, we can,” said Supervisor Marty Nohe, R-Coles. “We do it on land use cases all the time if that’s what applicants ask us for.”

Principi believes a deferral of action is certainly a strong possibility for the July 18 meeting, though he’s frustrated that the board would even hold a hearing to begin with, since the deal still isn’t in its final form. But Candland hopes the board doesn’t agree to any delay, and simply takes an up or down vote.

“We know what this deal is going to be and we know the parameters, so there’s no point in delaying this,” Candland said.

As Prince William County supervisors near a key vote on a proposed stadium deal for the Potomac Nationals, a pair of new developments could ei…

The proposed P-Nat stadium is in a bad location. The small plot of land is in a low lying area subject to flooding - very expensive and ineffective to try to make it acceptable. Plus PWC taxpayers (I am one) should not be required to guarantee a 30 year, $35,000,000 bond for a private business - this is against the Virginia law. I have been to the Pfitzner stadium many time - it is perfectly acceptable for a minor league baseball team. I say let the P-Nats go elsewhere!

Not to mention traffic situation - a late afternoon ball game, combined with I-95 traffic would be a nightmare. God help anyone who had to get into the hospital across the street.

Silber tried this about 10 years ago and I was a part of the softball group that played (on Sundays) at the fields surrounding Pfitzner Stadium. Silber "promised" that new softball fields would be built at the site of where the stadium currently sits, but when the group required Silber to put it in writing, the P-Nats Owner balked at the idea.

"Silber recently told the supervisors in a closed session that he believes he can sell naming rights to a new stadium for at least $10 million over 10 years. That money would be split between him and the county, significantly reducing the cost to Prince William. The county would own the stadium and lease it to the team." - after 10 years and they STILL cannot secure naming rights?!?!?!?!

While there would naturally be some posturing, I would take Silber at his word that he'd move or sell the team. I'd prefer to see them stick in the area since I like going to Minor League baseball. I imagine Louden county would totally be willing. A darkhorse candidate might be to move the team to the stadium in Waldorf, Md, that currently houses an independent league team. I think a problem with that site is that it might be in Orioles and/or Baysox territory who might have the ability to veto a move there.

I'll be happy to see Silber leave. The P-Nats draw

Simon Cowell is on the mend after breaking his back: 'He's taken some steps'