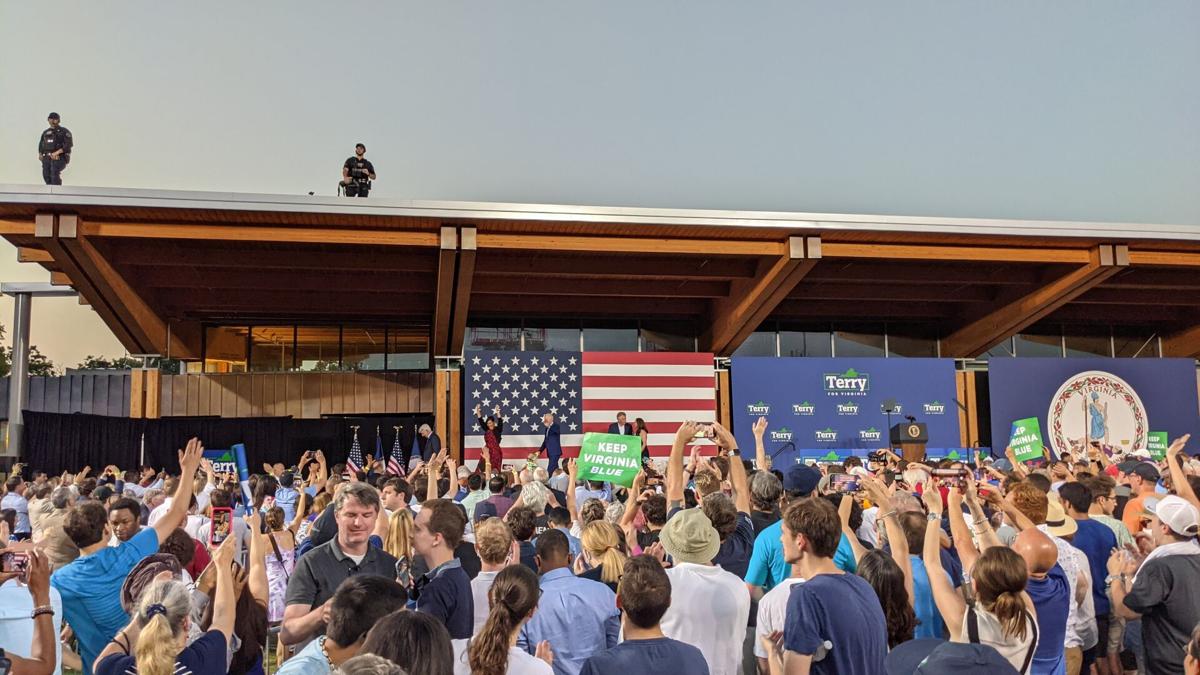 President Joe Biden waves to the crowd in Arlington during a campaign appearance for Democratic gubernatorial candidate Terry McAuliffe. 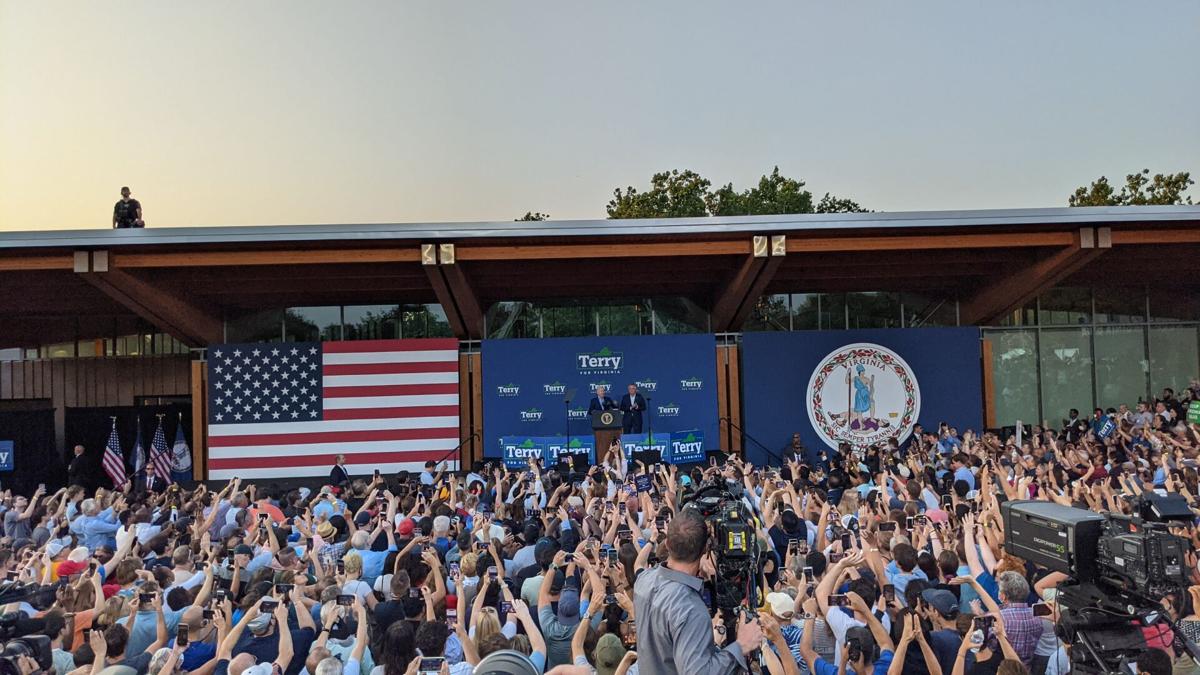 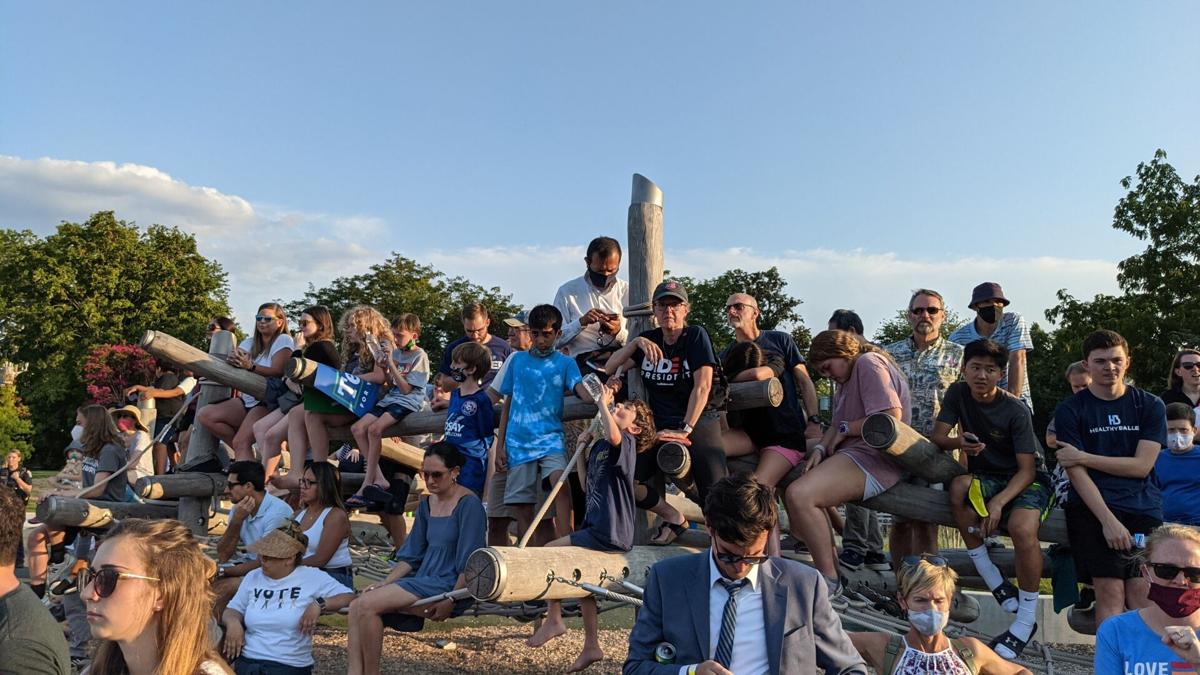 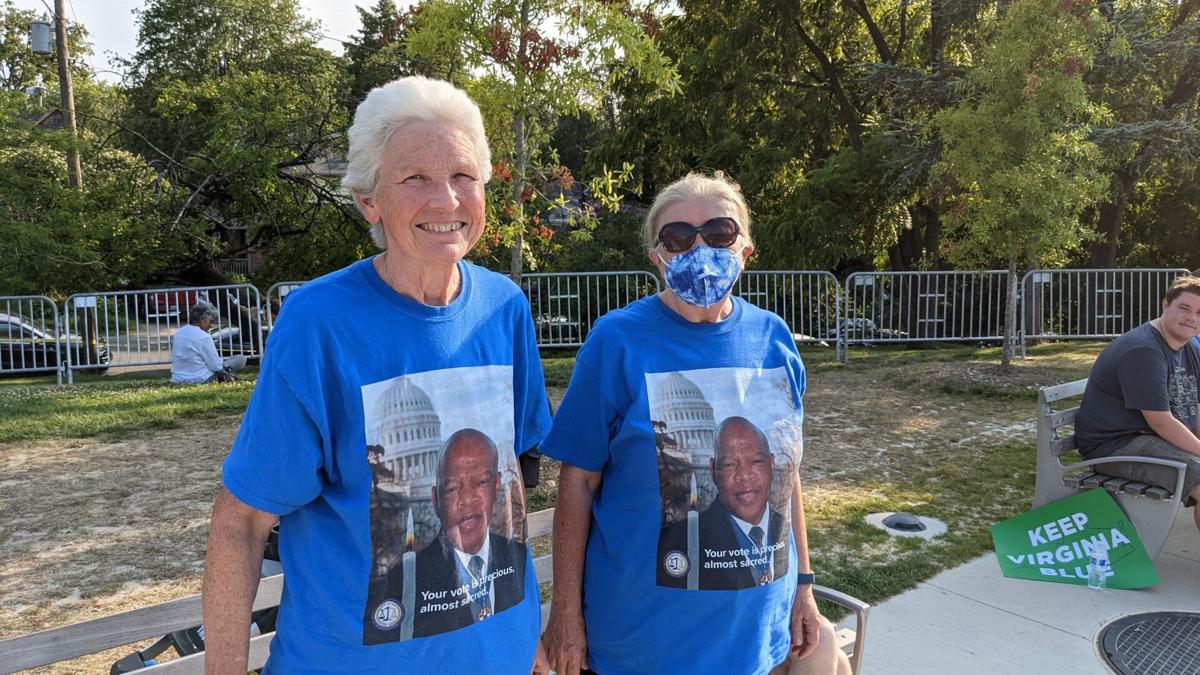 Sisters Cathy Hook and Miriam Riner were at Lubber Run Park in Arlington Friday to deliver a message.

Sure, they're Democrats who plan to vote for Terry McAuliffe in his gubernatorial race against Republican Glen Youngkin this fall. But their message was for President Joe Biden, who was appearing alongside McAuliffe in the president's first campaign event since taking office.

"We're here to support Terry McAuiffe, but we're also here to encourage Joe Biden to get on the For the People Act and make it a bigger priority. He's got to get it done," Hook said of the voting rights bill sitting idle in the U.S. Senate after being passed in the House of Representatives. "The right to vote is sacred and we're about to lose it ... the pressure has to get on. Who cares about the stupid filibuster?"

Waiting for Biden and McAuliffe to appear, the two said they had hoped to deliver that message with several handmade signs they'd prepared for the event. But in the hours leading up to Biden's appearance, attendees received an email saying that no signs would be allowed. "Terry for Virginia" and "Keep Virginia Blue" signs were available instead.

Several of the thousands of Virginians in attendance Friday told InsideNoVa that they were also there primarily to see Joe Biden, with McAuliffe the secondary draw.

Carol Chin said she was excited to see a sitting president in person.

"I'm interested in hearing Biden speak," she said, describing herself as an independent voter. "I'm leaning more towards Terry."

But the friendly crowd was receptive to McAuliffe's campaign pitch, cheering him on as he spoke ahead of Biden. He talked up his experience, and the change Virginia saw when the Governor's Mansion went from Republican Bob McDonnell to himself back in 2013.

McAuliffe also made certain policy proposals, touting the 140 pages of his policy agenda that he's released to the public. They included paid sick leave for workers, a $15 minimum wage within his first three years in office, and a statewide average teacher salary above the nation's for the first time in Virginia's history.

"Donald Trump has endorsed him not once, not twice, but three times... they share the same agenda and you better believe that agenda is complete out of touch with Virginians," McAuliffe said.

Biden and McAuliffe have a history, and McAuliffe lent a hand to Biden during his 2020 campaign, becoming one of the first high-profile politicians to endorse Biden prior to Virginia's Super Tuesday primary. McAuliffe also appeared frequently on CNN as a political contributor during the presidential campaign. McAuliffe told the Washington Post that when he sealed up his second gubernatorial nomination in June, Biden quickly called to tell him that he was "all in." McAuliffe told Biden that he needed him to help campaign.

Biden joined McAuliffe on stage to excited applause from the crowd and spent most of his speaking time touting what his administration had already accomplished wth the American Rescue Plan Act this spring, and his outstanding agenda, particularly on infrastructure. He said that McAuliffe and he both agreed that if the wealth paid their fair share in taxes, working families could have a better chance at prosperity.

"Terry and I share the same basic truth, trickle-down economics never work. It's time to build the economy from the bottom-up and the middle-out," Biden said, also taking some time to link Youngkin and Trump, whom he beat in Virginia by more than 10 percentage points. "We have a lot in common. I ran against Donald Trump and so is Terry. And I whipped Donald Trump in Virginia and so will Terry. The guy Terry's running against is an acolyte of Donald Trump, for real."

Other speakers exhorted those in attendance to focus not just on McAuliffe and lieutenant governor nominee Del. Hala Ayala, but to contribute and volunteer for House of Delegates races as well. Democrats currently hold a 55-45 advantage in the chamber, with every seat up for election this fall.

"I wanted to get out of the house and I heard Joe Biden was coming," he told InsideNoVa, saying that some young people he knew were somewhat disappointed that McAuliffe was the nominee again, but that they were excited to protect legislative wins the Democrats had secured.

"I think [McAuliffe] is going to have a much easier time if we re-elect the Democratic majority in the General Assembly," Forbes said. "Young people are excited making sure we get stuff done, keeping the legalization of marijuana, making sure we get justice for people who were affected by silly tough-on-crime laws."

The DemocRAT Party, a hive mind, ALL must think alike, ALL must tow the Party line. If THAT isn't Communist, I don't know what is. They lie about everything, they cheat anytime they can, which appears to be ALWAYS. "By ANY means necessary" is there motto and the live it to the letter! They HATE American exceptionalism, that ANYONE can achieve Greatness, if they WORK at it. Because they hate people who work, because people who work, don't vote for them. They also hate themselves and project that hate onto others.

You are a great example of why there needs to be a larger emphasis on education.

And I am pretty sure workers LOVE to be employed in a Right-To Work state, y'know the ones where employers can fire you without cause. Totally pro-worker environment.

For some reason, the comments are disabled on the article referencing Biden stumping for McAuliffe and some blowback about a link that may collect data.

If you go to Glenn Youngkin's main page (https://www.youngkinforgovernor.com/), he uses a tracker called Hotjar (https://www.hotjar.com/), which visualizes the users behavior (via mouse motion tracking and dwell time while collecting individual user data).

Helllooo Pravda? The venue was half-empty and there were at most 500 people, not the “thousands” referenced by the New Math expert Jared. And nothing at all about the hecklers…

"...and a statewide average teacher salary above the nation's for the first time in Virginia's history."

Where have I heard that before? Oh yeah, that's what this liar said the last time he ran. Watch the lemmings lap up the empty promises.

Ahh, no they are not. Can't believe folks buy the idea that voting "rights" are being restricted in any way. Clever move by the Dems to claim so though. But sending ballots to everyone, not requiring signatures or verifying signatures, not verifying everyone being sent ballots is alive, or even allowing a head of household to easily order ballots for everyone 18 or over and vote for them all is all very very very shady.

I would love if you can go state by state and explain the rationale behind voting restrictions that were passed:

Eliminate or limit sending mail ballots to voters who do not specifically request them FL S.B. 90

It would be super cool if you can explain why. And why now? I mean, if the argument is to claim that the past election was fraudulent, then by all means, lets re-tally all the votes TO INCLUDE MEMBERS OF CONGRESS. There was definitely something shady going down in Kentucky as well...

Even better idea: in order to vote, you should present a vaccination card. And if that is fraudulent, throw the book at them.

Remember 10 years ago? Obama and Biden were both "tough on crime".

More running against Trump. But what about CV19, which will be a major public health problem years into the future? Being "tough on crime"? Who was President and who was Vice-President when McAuliffe was Governor and police forces were militarized?

The former guy still owns the Republican Party and Youngkin is his slightly more polished clone. So the comments were valid. The state legislature was Republican when McAulliffe was governor. This past legislative session shows the positive changes that can happen with Democratic Party control. The Republicans are the party of the worst ideas of the past

Mmm love me some Democratic Party control but clearly not as much as you. The democratic party is anything but democratic.

The republican party is really communist.

Drake Bell speaks out about attempted child endangerment charges: 'I am not perfect'

Naomi Campbell: I'm so lucky to have a dream child