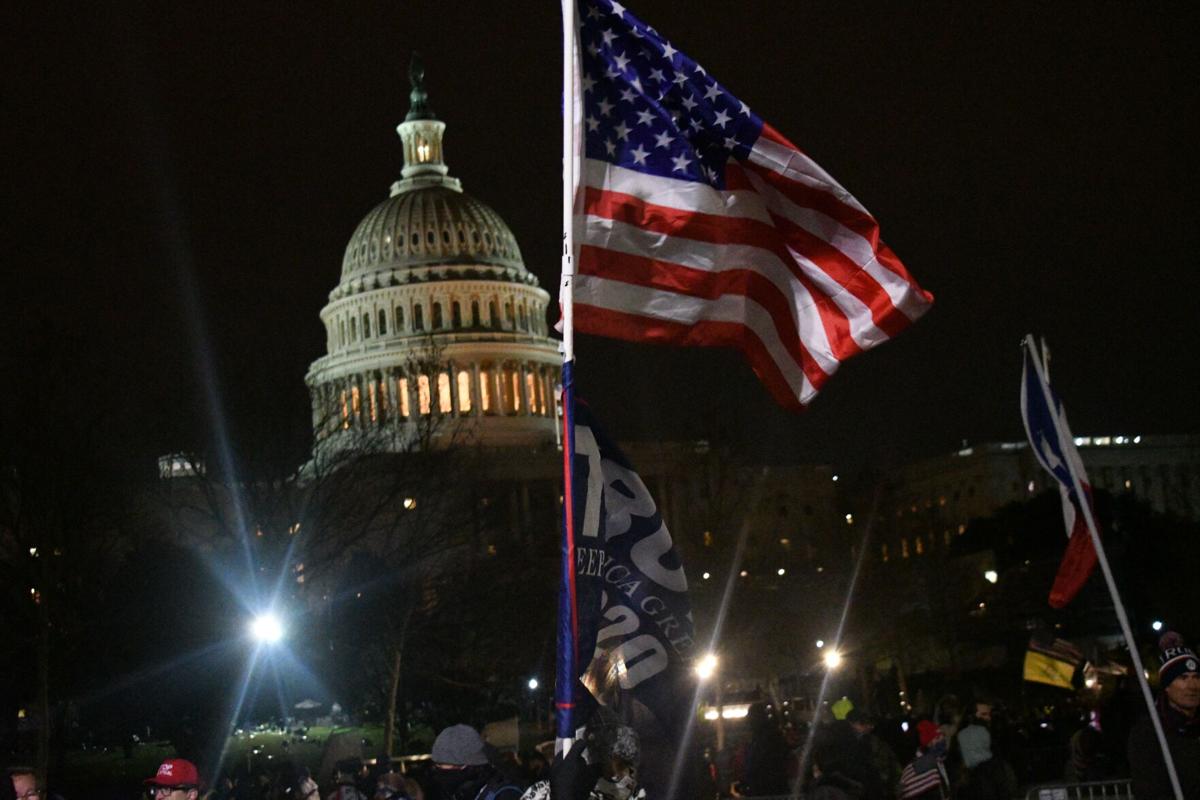 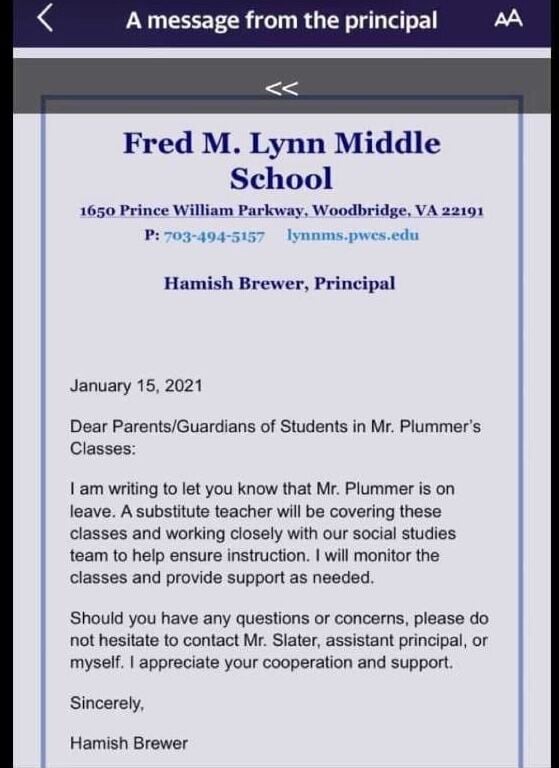 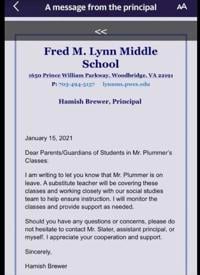 A teacher at Fred Lynn Middle School in Woodbridge is on leave after, parents say, he told students over video in remote learning he was at the U.S. Capitol on Jan. 6.

According to a Jan. 15 note to parents from Fred Lynn principal Hamish Brewer, social studies teacher Benjamin Plummer is on leave and a substitute teacher will fill in for his classes.

A blurry video recorded by a student shows a man two parents said is Plummer discussing the Capitol riot and saying, "I was there, that's what I witnessed. And I heard the media just blame Trump supporters the whole time and I knew then it was a set up." Plummer could not be located for comment Tuesday.

Prince William County school officials said they could not discuss specific personnel matters, but they are "aware of reports of social media posts connecting employee(s) to the protests and riots at the Capitol ..."

The allegations will be investigated and handled according to school policy and regulation, the school system said in a statement.

How come the principal at PWCS Ashland Elementary can post his own political view on the school social media pages and their is no repercussions for him? Could it be he has so many fooled by his nice guy face ask his staff how nice he really is. Must be ok because he didn't like Trump either so @PWCS they supported his bad behavior and use of school social media. The rule should be across the board regardless who you support!

4 years ago after Trump's inauguration there was No discussion of the speeches given or questions for students to ponder. Fast forward this inauguration and our school counselor made a lesson asking students to respond to speeches and poetry. The hypocrisy is deafening. No objectivity,. We employees regularly endure trainings on bias, but apparently this kind of political bias is ok.

Unless Mr. Plummer broke The Law, he would have a good law suite against the County school system for violating HIS 1st Amendment rights... FOUND in that document you just posted every employee as swearing an oath to, "The US Constitution". God bless the new president and God bless a trustworthy election in 4 years.

As January 6 was a Wednesay, was he using his personal time at the event? It wasn't illegal to go downtown or be in the vicinity. If he was arrested or faces charges for some kind of other behavior, that should be resolved according to PWCS guidelines for such behavior. And although his speech seems to be pushing the line of objective education, it won't likely be the first or last time we see someone in education advocating for a political point of view. I would hope PWCS would have a policy on that to weigh all teacher comments in the same objective view -- whether more right or more left leaning.

just because he said he was there what a joke

Was this teacher suspended because he told the students he was there? Because he was there during work time (if he was)? Or, was it simply because he was practicing his constitutional right to peacefully protest (most were)? If it was the latter, he should not have been suspended at all. It is a sad day to see teachers (or anyone) suspended over an allegation of wrongdoing before all facts are known.

The article says he was at the Capitol. It doesn’t clealry say he was in the Capitol. If he broke the law or if he was there when he was on the clock, then I understand the suspension. Otherwise, doesn’t make sense. Just one more detail would have made this article so much better.

So much for free speech and the right to protest. Welcome to cancel culture. If he did not break the law and was not part of those who stormed the Capitol or made threatening comments, he should NOT be suspended for expressing his first amendment constitutional rights.

Cardi B will appear in F10, Vin Diesel spills