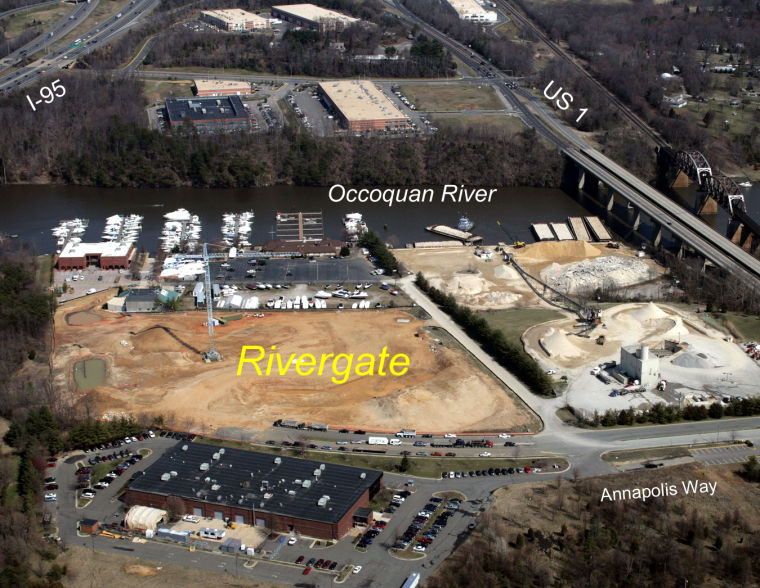 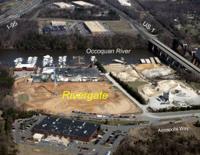 This north-looking March 2008 aerial shows the location of the proposed Rivergate project approved for 720 condominiums.  The tall construction crane to the upper left was erected more for marketing purposes rather than imminent construction, which do date has never occurred. 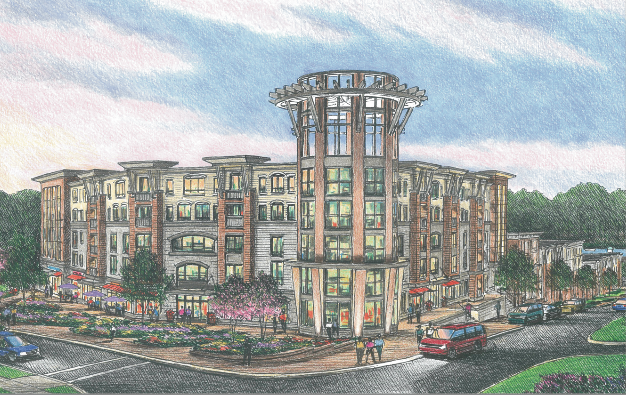 An artist’s rendering of the luxury apartment buildings planned for the Rivergate project, which has been stalled since 2005. 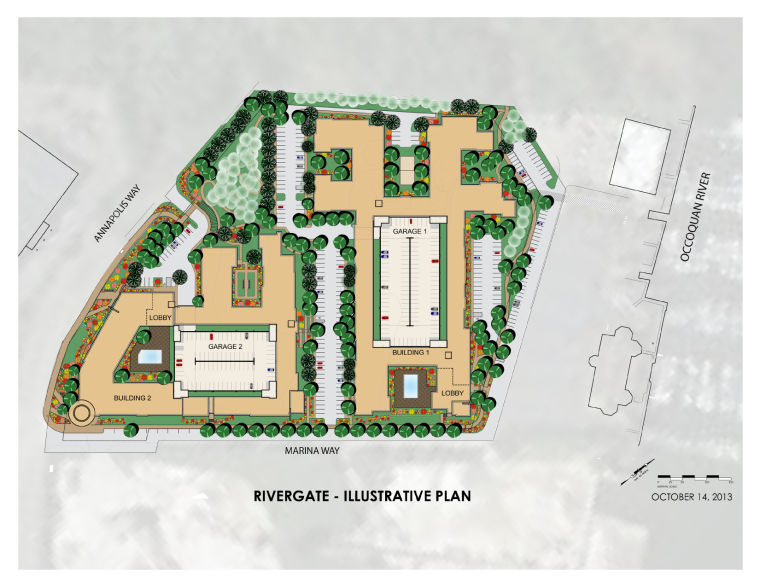 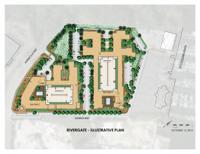 A rendering of the layout of the proposed Rivergate luxury apartments.

This north-looking March 2008 aerial shows the location of the proposed Rivergate project approved for 720 condominiums.  The tall construction crane to the upper left was erected more for marketing purposes rather than imminent construction, which do date has never occurred.

An artist’s rendering of the luxury apartment buildings planned for the Rivergate project, which has been stalled since 2005.

A rendering of the layout of the proposed Rivergate luxury apartments.

The Prince William County Board of Supervisors is scheduled to vote today on the proposed Rivergate Towers, which could bring another 720 multi-family units to the U.S. 1 corridor where Principi, D-Woodbridge, says 4,000 new apartments are already under construction.

In a recent email to his constituents, Principi said the Rivergate project, proposed for a 14-acre site on the Occoquan Reservoir near U.S. 1 and Annapolis Way, would add more traffic to area roadways and more students to neighborhood schools without sufficient proffer funds to offset the impacts.

“It’s clear, very clear, that the residents of Woodbridge don’t want more apartments,” Principi said during a recent Board of Supervisors meeting. “They’re sitting in traffic and their kids are sitting in classes that are just too big.”

The board will meet at 2 p.m. and 7:30 p.m. at the county’s McCoart Administration Center. Rivergate is listed for consideration during the evening session.

First proposed 10 years ago for a 14-acre site near U.S. 1 and Annapolis Way, Rivergate Towers was to be the first step in the redevelopment of North Woodbridge. It is being proposed by IDI Management, the developers of Washington’s first mixed-use development – Watergate – as well as both Leisure World of Virginia and Leisure World of Maryland, among several other multi-family projects in the area.

But like other proposed projects around the county, Rivergate was put on hold during the recession and its plans altered significantly for the post-recession economy. The project is now apartments – not condos --housed in two five- to six-story buildings – about one-third the height originally envisioned.

According to the current design, nicknamed a “Texas doughnut,” the apartments would be built around an interior parking garage, which allows residents to park on the same level as their units.

County staff is recommending approval of the project and its revised proffer statement, in part because the project will provide an updated “streetscape,” including sidewalks and street-side parking along Marina and Annapolis Way, as well as the construction of a portion of the Potomac Heritage Trail.

During a planning commission hearing on Rivergate last month, the project was praised by some speakers as a first step toward fulfilling the vision for a new gateway to Prince William County.

Occoquan resident Betty Dean called it an opportunity to turn an area of blight into “something that’s going to be the cover photo on Prince William marketing materials for years to come.”

“It truly will be the cornerstone of the new Woodbridge vision that really was developed by Supervisor Principi,” she added.

Principi, however, begs to differ.

He says the project no longer promises what it once did. He’s also objecting because the project slides in under the former proffer guidelines – permissible because plans were submitted before July 1 – and will deliver about $5.7 million less to Prince William County schools than the current guidelines suggest.

“The amount proffered by the developer to the school system is based on proffer guidelines written a decade ago,” Principi wrote in emails to Woodbridge residents last week. “I tried to encourage them to do more to mitigate the impact on area schools, but they refused. Why should taxpayers subsidize developers?”

IDI Management, and its controlling officer Guiseppe H. Cecchi, have been frequent and generous donors to Prince William supervisors.

According to records maintained by the Virginia Public Access Project, Board Chairman Corey Stewart, R-At Large, has benefitted most from the company’s largess. Stewart has collected a total of $16,000 from Cecchi or IDI since 2012.

IDI has made $500 donations to Supervisors Pete Candland, R-Gainesville, Maureen Caddigan, R-Potomac, and Marty Nohe, R-Coles. Supervisor Mike May, R-Occoquan, received a $250 donation from IDI in 2012.

Once dubbed the “Gateway to Prince William County,” plans for luxury high-rise apartments along the Occoquan died with the recession. Now a new vision is in place.

Will another apartment complex spark a long-awaited revitalization of North Woodbridge – or just more traffic and school overcrowding?

This is such a much more balanced story then what Potomaclocal.com reported. That site is just mouthpiece for their real estate advertisers.

The last thing we need is more apartments. This area has so much to offer.

Not sure why they constantly build nothing but crap and move on. It would not surprise me if they give a bunch of permits and build "used car lots" next to the new apartments.

Spend some money on the schools and the roads. I cant think of any other place in Northern Virgina where water front property is selling for less then its worth. DC has a huge portion of water front property with land undeveloped. At least they are smart enough not to put a bunch of car lots and abandon buildings next to a brand new apartment complex.

Our schools on this side of town are horrible. If you need a part for your 1982 Honda your in luck. There are 3 auto part stores with in a mile of each other on rout 1. If you want to buy a good steak for your grill....pack a lunch for your long drive up rout 1.

Its pretty obvious that the people in the past that have been making these decisions are brain dead.

I am guessing the Price William County Board of Supervisors know where to buy a good steak with the free money they get for doing a pathetic job of running this county.

Prince William County is always in the news. Not just local news but national news. And the press we get is all ways negative.

Prince William County Board of Supervisors are crazy if they approve this! Do they live is this area to see what traffic is like already? PWC needs to invest in improving the road infrastructure especially in Woodbridge before they approve more apartments. Invest in extending the Metro Blue and Yellow lines into the County and widening Route 1 South of Cardinal Drive before I die....in traffic. The County has lost out many times in bringing jobs to the county because of the lack of poor road infrastructure and lack of Metro.... i.e. FBI Headquarters @ Potomac Shores. Invest in the county and stop being CHEAP!

Apparently Frank is in love with the blight that defines Woodbridge. I sure haven't seen him do much to change it in the 7 years I've lived there. The area could use some serious gentrification.

No one ever believed they would ever have high end condos then. Like the crane, the project was a joked then and now they just want to build and go. Unreal! Thats right Frank, tell them not so fast and have them reapply under the new rules for proffers! Too many apartments being built and the developers take their money and go while our kids suffer oversize class rooms. We really need to get a hold of this!