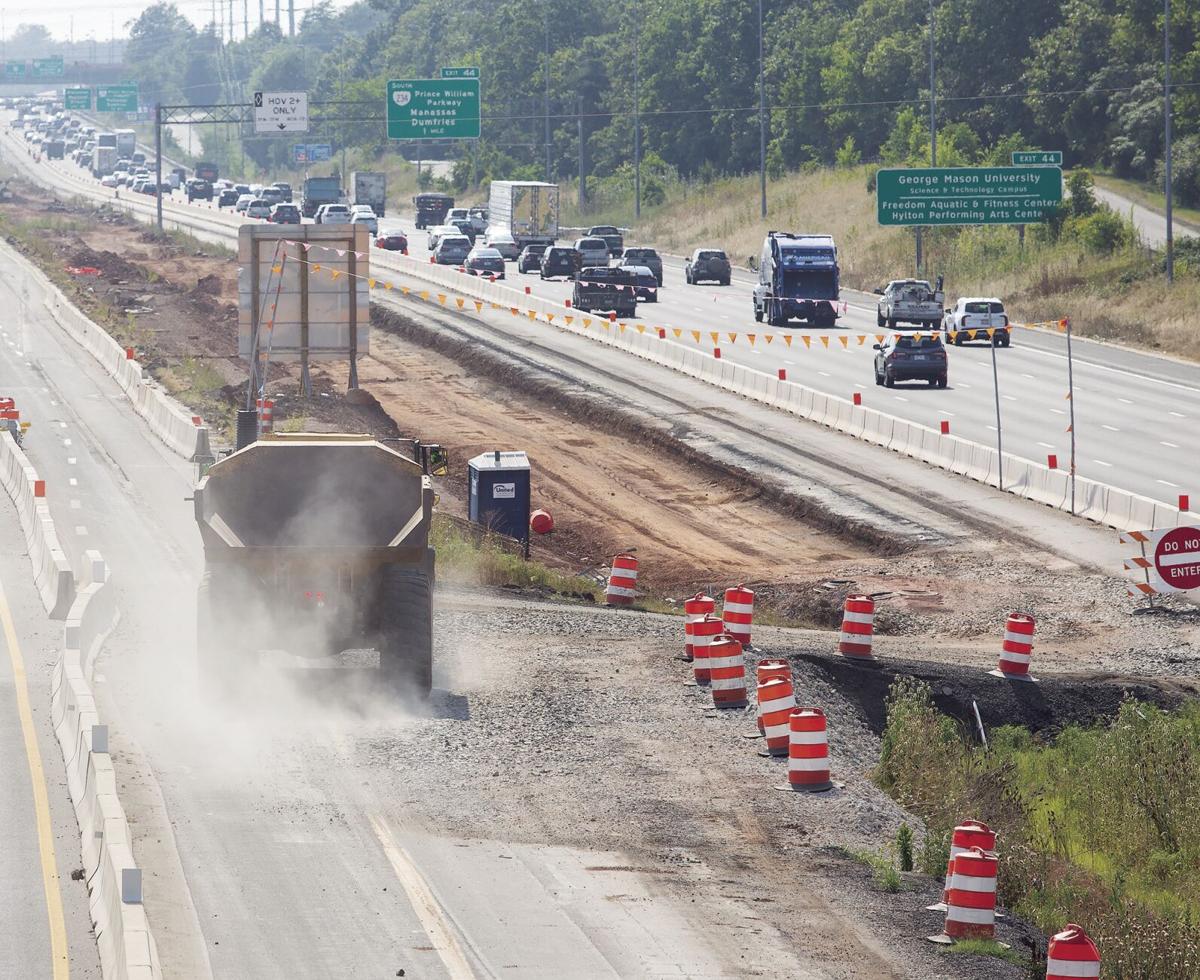 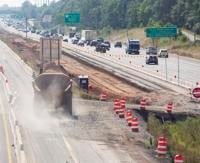 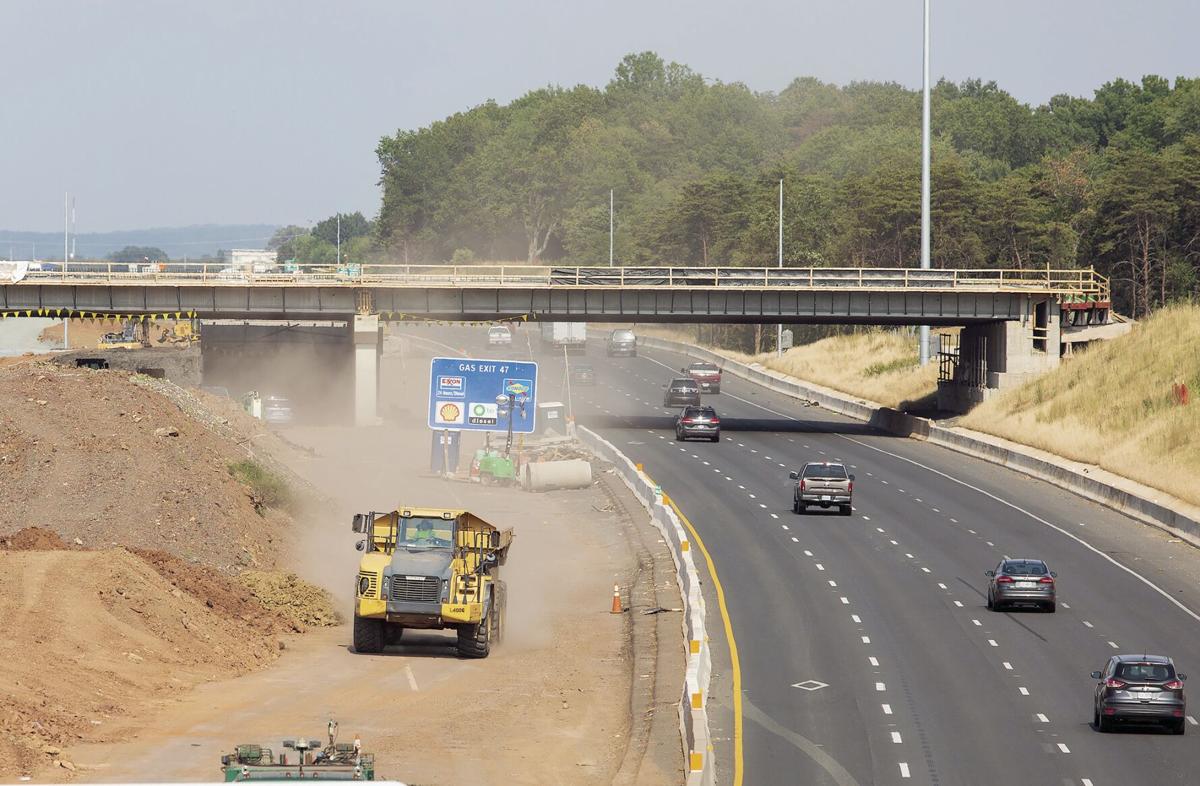 A truck kicks up dust during construction onn Interstate 66 near Exit 47, on July 26.

Driving either direction on Interstate 66 west of Interstate 495, it’s impossible to miss the work on the 22.5-mile stretch of highway. But managers of the $3.7 billion Transform 66 project say work has never been moving faster.

Currently, about $60 million of work is being done every month and nearly 2,000 workers are on the job every day according to Susan Shaw, the Virginia Department of Transportation’s regional transportation program director for Northern Virginia. “So there’s a lot happening,” she said.

Along most of the corridor, the focus is completing work toward the outside of the highway, so that traffic can then be diverted there while the toll lanes on the inside are being completed. That level of work is expected to continue through the fall, depending on the weather.

The most noticeable work this summer has been in replacing 14 bridges at various interchanges, foremost among them bridges at the eastern end of the corridor and the I-495 interchange. Ramps from I-495 to the express lanes were recently completed.

“The 66 and the 495 interchange is one of the more complex areas with several bridges and ramps in that area,” Shaw told InsideNoVa.

Along most of the corridor, the focus is completing work toward the outside of the highway, so that traffic can then be diverted there while the toll lanes on the inside are being completed. Earlier this month, the new bridge opened to traffic, and more recently the demolition of the old Route 50 bridge over I-66 moved traffic along the highway to a single lane in each direction and caused some closures of the highway overnight. Intermittent road closures will continue overnight when beam lifts are required, and nighttime lane closures will remain an inconvenience for some through the fall, depending on the weather.

Further west, work at Route 29 will cause lane closures on I-66 and 29 as the new bridge there is being constructed.

“We try to pick low volume time periods for this work. We had the big advantage, so to speak, last year with COVID,” Shaw said. “Our volumes were much reduced, but we’re … seeing that continue to grow back … approaching pre-pandemic levels.

During the height of the pandemic, VDOT, I-66 Express Mobility Partners (EMP) and FAM Construction expanded the overnight hours available for work that required road closures. Now, with traffic nearly reaching pre-pandemic highs levels once again, that work had to be pared back to regular hours. And traffic is only expected to keep growing as more workers return to the office in the fall. Under the construction contract with VDOT, traffic has to keep moving during periods.

But the work remains on schedule for tolling to begin outside the beltway in December 2022. Paving work has been ongoing throughout, but the construction team plans to have the bulk of the substantial interchange bridge work completed by the end of the year. Once it’s all completed, the contractor will turn its focus to completing noise walls and bike trail, as well as putting the finishing touches on the express lanes themselves.

“Moving into 2022 … we will see different types of work. You’re going to be looking at more final paving, final striping, focusing on signage, lighting, some of the more detailed work and it will be on the inside,” Shaw said.

Also next year, Shaw said, VDOT and EMP will start pushing out more information to the public about the toll lanes themselves and who can use them. Once they’re open and running from I-495 to Haymarket, vehicles with three or more occupants will be able to travel along with buses for free on the express lanes. For vehicles with fewer than three passengers, the lanes will use the variable tolling system used inside the beltway currently, with rates increasing as traffic rises to maintain a certain level of traffic flow.

“I think over the next year and a half, people will start to see, ‘Oh, that’s where the lanes are going to be in the middle of the highway,’” said Christopher Doherty, EMP’s corporate affairs director. “It’ll start coming together visually.”

‘Miracle Workers,’ ‘Touched by an Angel,’ & More Heavenly Shows to Stream on TV