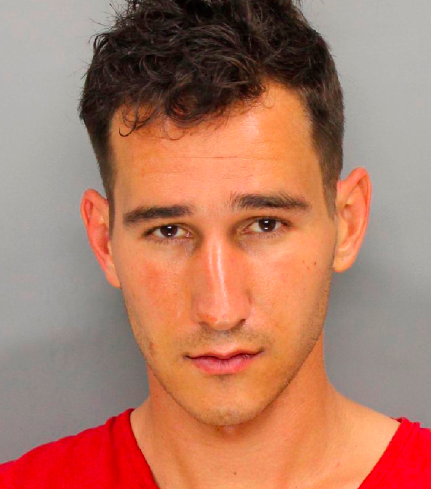 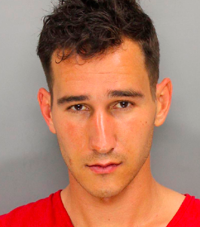 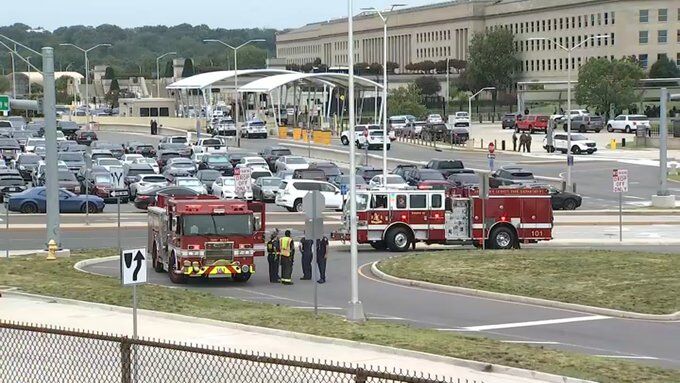 The scene outside the Pentagon on Aug. 3, 2021 from NBC Washington.

The FBI has identified a Georgia man as the attacker who ambushed and stabbed a Pentagon police officer Tuesday morning near the installation's Metro bus platform.

Austin William Lanz, 27, most recently of Acworth, Ga., died in the incident after taking Pentagon police Officer George Gonzalez's service weapon and shooting himself, the FBI said in a news release.

The deadly encounter happened at 10:37 a.m. as Lanz exited a bus at the Pentagon Transit Center in Arlington. He "immediately, without provocation" attacked Gonzalez with a knife, severely wounding him, the FBI said.

"A struggle ensued, in which the subject mortally wounded Officer Gonzalez and then shot himself with the officer’s service weapon," the FBI said. Other Pentagon police officers engaged Lanz, who ultimately died at the scene.

A civilian bystander was also injured during the incident and was taken to the hospital and released after treatment for non-life-threatening injuries, the FBI said.

Gonzalez was taken to George Washington University Hospital in Washington, where he died shortly after the attack. The Pentagon was on lockdown for about an hour and a half after the incident.

Agents are still trying to determine a motive for the ambush, the FBI said.

Lanz was arrested in Cobb County, Ga., in April on charges of aggravated battery on police, a count of making a terrorist threat and a charge for rioting in a penal institution, the Associated Press reported. He was charged that same day with criminal trespassing and burglary charges, according to online court records.

#USA #Washington A #policeofficer was shot and killed outside the #Pentagon this morning, officers greet the fallen law enforcement member as he is taken away. pic.twitter.com/OLHlCEISYD

I work for a 3 letter agency. After the bombing in Nashville we tracked the media’s inquires about the bomber. The top 3 searches from all media included right ring alga rhythms. They were determined to paint this guy as a right wing extremist. We see how that worked out. Sorry but the media is no longer credible including this rag of a newspaper.

Any legit smart person working for a 3 letter agency wouldn't admit it online, especially Tactics, Techniques, and Procedures (TTP) of any law enforcement or intelligence gathering. (Hint: you should probably delete your comment and self-report to your security manager).

Not surprisingly, it looks like this has devolved into a Left-Right, Democrat-Republican debate. Get out of your tribes. I doubt he even votes. This man had some serious issues which I doubt had anything to do with party affiliation. He was released from the Marines within a month before actually becoming a marine and had a history of disruptive behaviors. Either he needs some serious mental health treatment or needs to be tried and face the consequences.

It would have been nice if he was tried and face a jury. But if you read the article (or followed up on any other news outlet) you would have found that responding officers shot and killed him.

The comments section will unfortunately always devolve into partisan bickering, as one group will attempt to pin the blame for whatever incident occurred, and attempt to attach it to a general policy held by the opposition.

The danger now is that fringe radicalism has seeped into the collective consciousness of the overarching political parties that govern the US. When has it been acceptable to endorse white supremacy? Is toxic masculinity a thing? Is it a thing only for incels (Involuntary celibate)? Why do incels gravitate toward alt-right ideology, the same kind identified in all of the of the militias? Does having a support group of like-minded individuals that direct their angst and hate toward a subset of the population seem like a good idea? What can go wrong? Are you seeing this rhetoric repeated by elected officials? How can that be dangerous and when have we seen it before?

You are right that the comment section gets heated at some times, mostly when the issue of renaming schools or streets is the subject. But that is what is going happen for the foreseeable future because the internet is full of idiots and nobody should trust what another person says. We can only argue ideas and feelings. The danger is if those feelings manifest into something more sinister, which is why people should get off social media.

This guy has a history of assaulting LEO's. Looks and sounds like a Trumper to me. I wont be surprised if we later find out he was busy storming the Capitol and assaulting LEO's back in Jan

Wow, somebody actually was killed without a gun! I guess the Dumbocrats will now be on a tirade to ban and control all knives or sharp objects.

Then Repeniscans will victim blame and say everyone should wear slash resistant clothing.

Victim blame? Are you serious? Pretty nutty comment based on nothing but your own ignorance.

Another Democrat anti police activist goes down in flames. Sadly, that officer is no longer with us. God Bless him and his family.

Another Unite the Right madman on a killing spree inflicting deadly harm on innocent law abiding and law enforcing citizens.

Unite the Right madman? Based on what? He was a proven failure and druggie who used a knife. I'm thinking that sounds like your kind.

And you know this how? By which strange magic gave you this esoteric magic that lets you read his mind.

You've managed to make one of the most clueless comments here oh genius.

Lindsey Buckingham: Stevie Nicks not over me