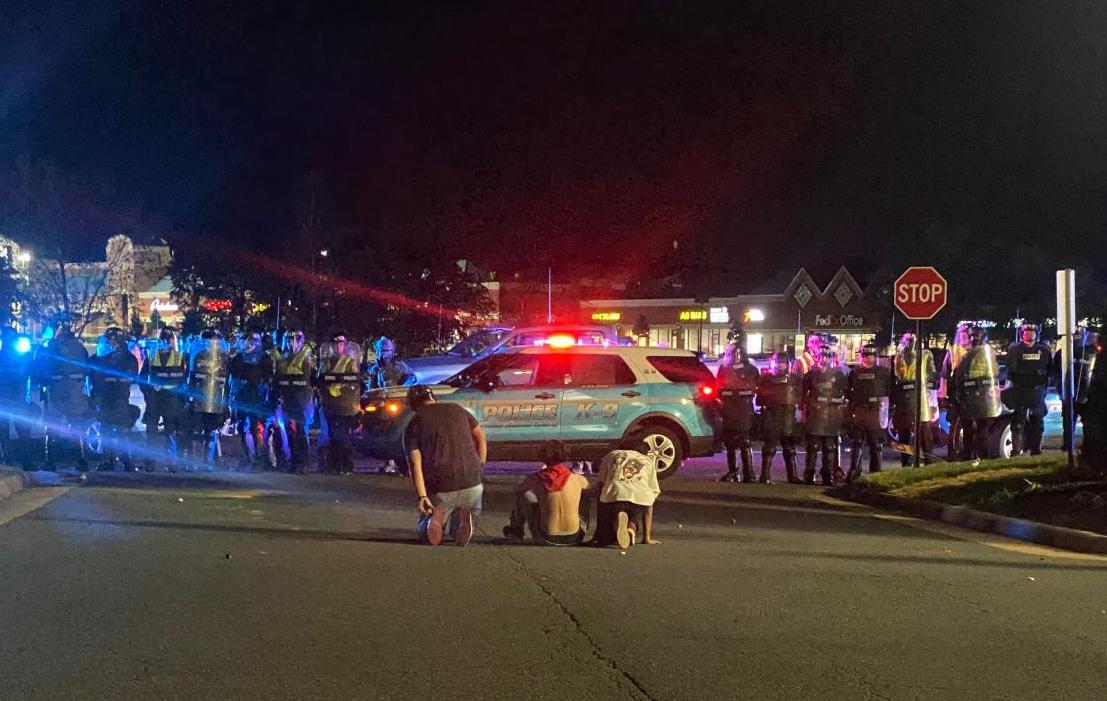 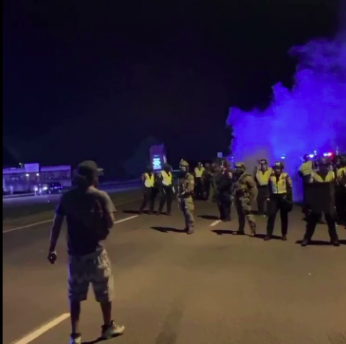 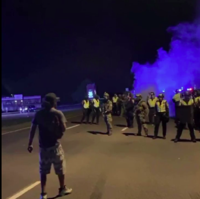 What started as a peaceful protest in the Manassas area Saturday evening turned into a violent clash with demonstrators throwing rocks, bricks and bottles at police late into the night.

By 12:30 a.m., the protest had mostly broken up, leaving two state troopers injured - one struck in the head with a brick and the other injured by a rock thrown at his leg, Virginia State Police spokeswoman Corinne Geller said.

The trooper struck in the head suffered only minor injuries thanks to her riot helmet.

"The protesters were given repeated verbal commands to disperse at that location, but have refused," Geller said. "In an effort to safely disperse the violent crowd, state police has utilized non-lethal tactics, such as OC "pepper" spray and powder."

In a phone call with InsideNoVa.com, local drone photographer Alfredo Panameno of Sky’s the Limit Media described the scene as flash bangs could be heard in the distance.

At 11:30 p.m., Panameno said the crowd was being pushed back by officers after breaking out the windows of Best Buy in Bull Run Plaza, BB&T bank,  AT&T, Taco Bell and a police cruiser’s windows.

The Manassas-area rally against the death of George Floyd in Minneapolis began with people carrying signs and standing outside the Taco Bell at Sudley Road and Sudley Manor Drive outside Manassas. Drivers in the area at the time said the people held signs and didn’t block traffic.

Panameno said there were about 100 people to start, but the crowd grew quickly and became rowdier. Protestors at one point began heading for Interstate 66, with the crowd yelling “66, 66,” with a mission to block the interstate.

Police then began blocking the protestors, holding the crowd back at Williamson Boulevard, Panameno said. That’s when the crowd began to get out of hand, with some throwing rocks and water bottles at police officers and vehicles, he said.

By 9:30 p.m., Prince William County police had declared the protest an unlawful assembly and brought in Virginia State Police and a Fairfax police helicopter to hold the crowd.

A few miles from where I live, clearly these protests are no longer limited to cities but seeing violent protests in the suburbs shows how deeply rooted the anger and betray truly is this time around! #BlackLivesMatter #Manassas #BLM https://t.co/AFc5M0MMYe

Panameno said there were between 300 and 400 people in the crowd, with more than 100 law-enforcement officers in riot gear forming lines to move the crowd.

Police continued to block roads and intersections through the Sudley area after the crowd left, and planned to maintain that presence through the night.

Nothing but garbage. They don't give 2 sh**ts about Floyd. Just a chance to show their normal thug selves.

This is the realm of the new Democrat party, and Soros money that supports these groups.

Thugs being thugs. Obviously has nothing to do with George Floyd. These are just fools looking for trouble. The police need to be much more forceful across the nation to stop these fools.

The violence that has unfortunately occurred from these protests is not acceptable, never will be.

But you know what else is not acceptable? The senseless and criminal killing of persons of color by law enforcement officers or wannabes like Zimmerman and the McMichaels who act outside the bounds of decency and lawfullness. This has been a problem in this country for far too long, which is why people are taking to the streets to have their voices heard. This systematic racism is a major problem and is only being made worse by the head racist Trump as he pours gasoline on the fire and once again cannot exhibit any leadership by saying ANYTHING to try and stem the violence. But then he's always been too busy with his businesses or his golf game to do the right thing. Which at this point isn't surprising, he was too busy with his rallies and golf to properly respond to the covid-19 crisis and still can't show any leadership to develop a national testing program to get us back moving towards "normal". As long as this incompetent racist is in charge, this country is royally screwed.

timt, you are spot on regarding the unacceptable violence and the racist killing of individuals. In a country of nearly 330,000,000 individuals there will always be bad actors. This is a collective problem, not the fault of one person. The killing happened even under President Obama. My opinion is that this country needs to come together to develop concrete solutions, understanding that we will never be able to eradicate these situations 100%, but try to find a path forward that deals with police interactions and helps to change perceptions of each other. There is too much incendiary talk from everyone. Although there are many bad actors and racists in the world, there are also many good people in the country who do not agree with what happens with Mr. Aubrey nor Mr. Floyd, but also do not agree with anarchy.

Just want to inject some truth into this debate for the “timt”s of the world when it comes to the disparity on racial homicides. The numbers show the epidemic is pretty one sided.

Hint, it doesn’t comport with the narrative of the media and the left.

Some of the comments are laughable, some sad and then there are the ignorant that border on stupidity. To blame Trump for everything either shows a lack of understanding of events or a great fear of a man who according to our Constitution serves a term at the leisure of the people. Vote him out if you don't like

him. Remember though the previous occupant of the WH had eight long Years to unify things, he did nothing. Was he racist or just inept? Ironically you mention Zimmerman, his actions were during Obama’s time, he was a person of color himself, half Peruvian (mother) who graduated from Osbourn HS and lived his first 20 yrs in Manassas. Obama failed, Trump inherited the most divided nation in history.

Halsey: The Grammys are 'all about knowing the right people'

Anne Hathaway: Motherhood is more than a challenge