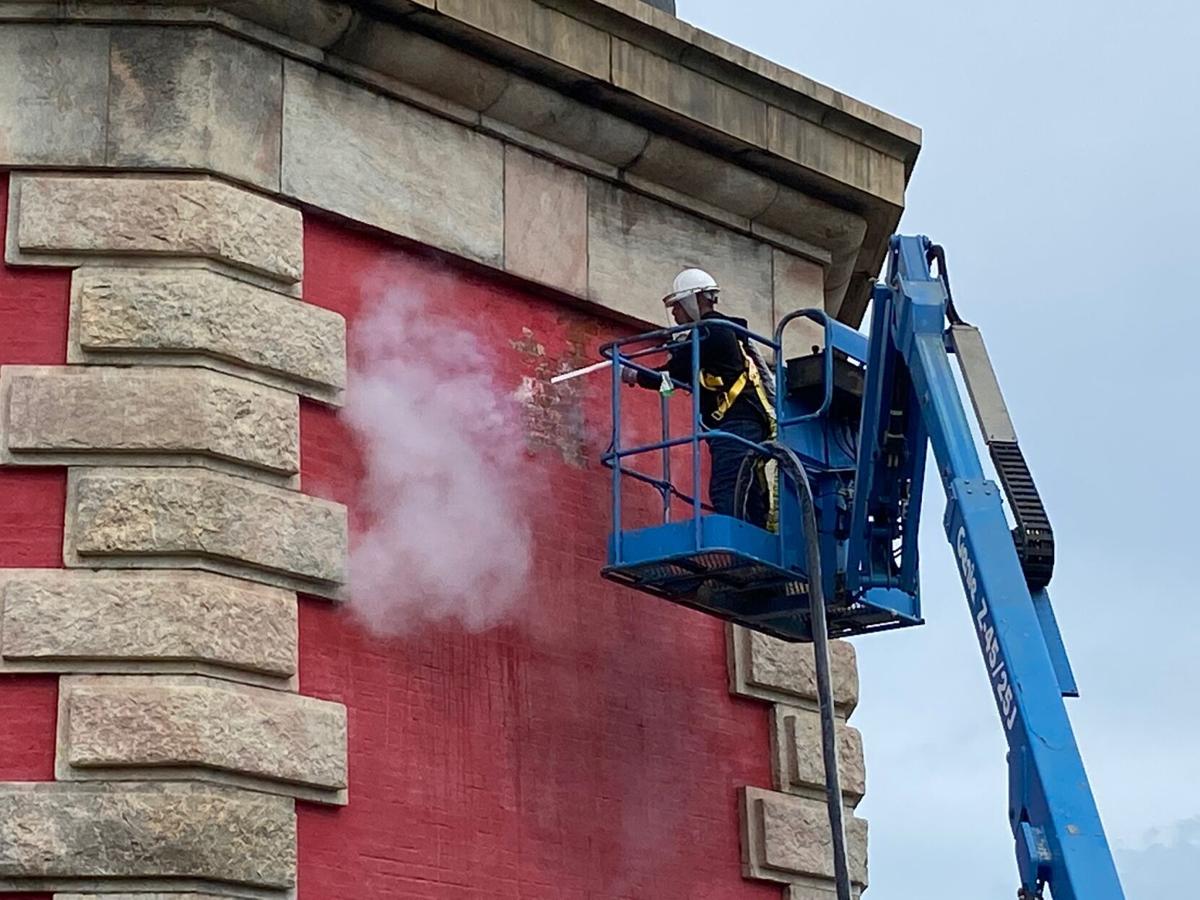 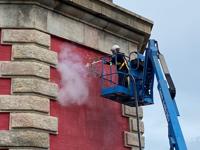 HydroPrep, a company based in Newport News, tested a patch of the lighthouse base with dry ice blasting Thursday. 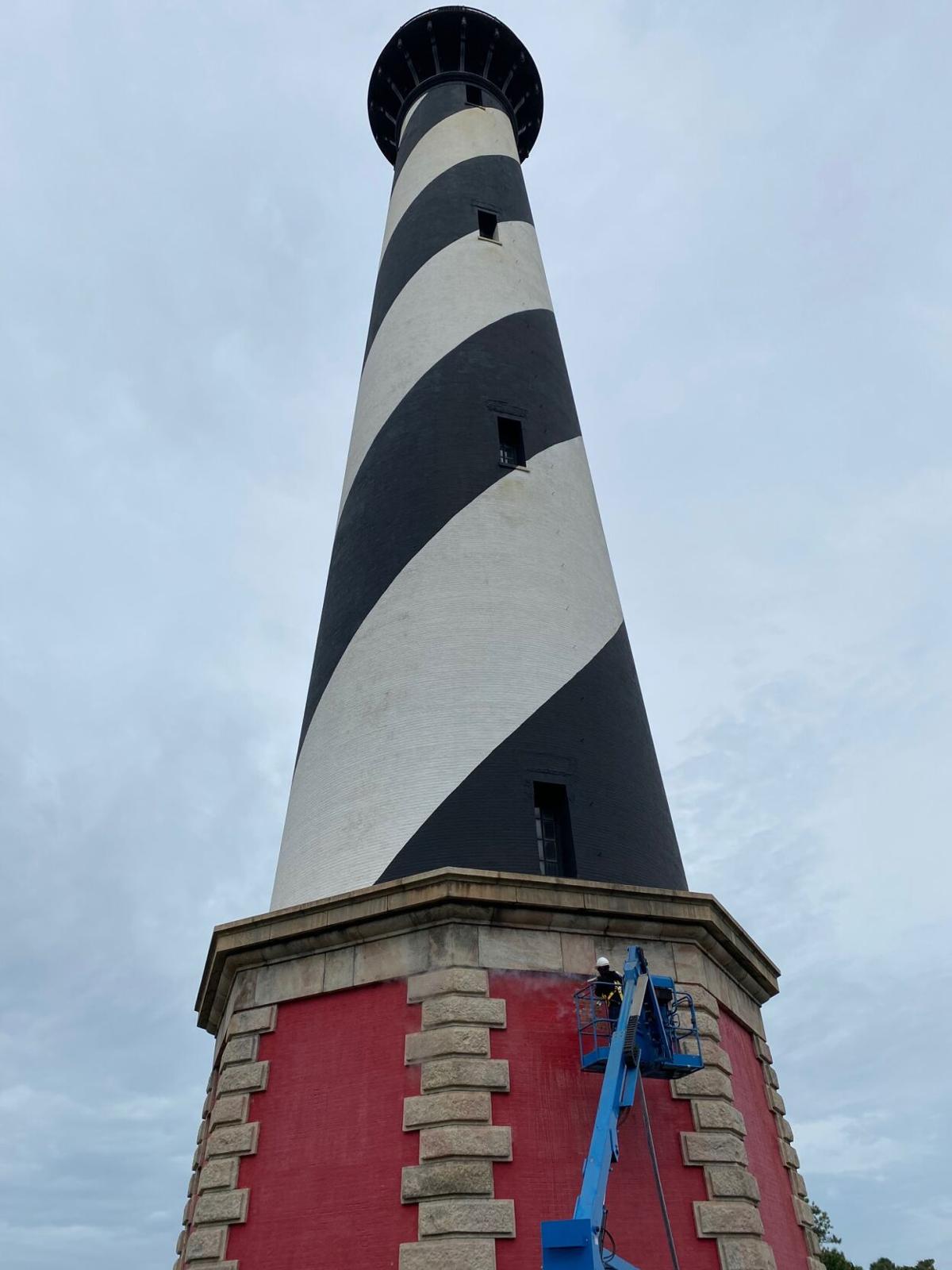 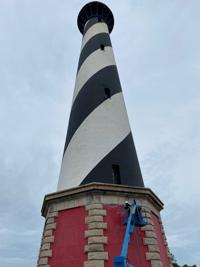 It would take about five months to remove all the lighthouse paint using dry ice blasting.

The iconic Cape Hatteras Lighthouse on North Carolina's Outer Banks will undergo a complete makeover next year, and the National Park Service this week tested a unique way to remove its many coats of red, white and black paint.

The NPS contracted with Newport News-based contractor HydroPrep to test dry ice blasting on a few feet of the 198½-foot tall beacon in Buxton Thursday afternoon. The method uses dry ice pellets that turn to carbon dioxide gas, leaving behind nothing but original surface.

“There were concerns that using sand blasting or a chemical paint peel or even scraping it would damage the brick work behind the paint,” said Dave Hallac, superintendent of the National Parks of Eastern North Carolina. “Dry-ice blasting is known to be effective in removing the paint but not the brick work.”

When renovations begin, likely this time next year, 12,000 square feet of paint will be removed from America's tallest lighthouse, which was built in 1870.

Ricky Dupuy, president of HydroPrep, said the company has assisted in several renovations using dry ice blasting. They’ve also helped in another lighthouse renovation, but not using dry-ice. The Cape Hatteras light would be their first.

During Thursday’s demonstration, the method seemed to cleanly remove paint on the red base of the lighthouse, leaving behind the brick underneath. Removing all the paint would likely take about five months, Hallac said.

The lighthouse was last painted in 2014, but the old paint was not removed during that project.

Repainting the iconic black and white swirl is just one facet of a larger renovation at the lighthouse.

“We’re re-doing everything you see, and a lot you don’t see,” Hallac said.

Other projects include interior and exterior paint, the marble flooring, replacing or repairing the metal window frames and perhaps changing the lantern itself to LED lighting. The park service is also looking into returning the first-order Fresnel lens, which now greets visitors to the Graveyard of the Atlantic Museum nearby.

The grounds will also see some changes, with the NPS planning to restore some of the landscape and native grasses that were around the lighthouse before it was moved from the beach to its current location in 1999.

The National Park Service has received funding for the massive repair project from Congress, and the items that need to be addressed stem from the results of a 2014 Comprehensive Condition Assessment Report, the Island Free Press reported earlier this year.

The park service doesn’t yet know what the project will cost, or exactly when it might begin.

“We’re still working on when the project is going to start,” Hallac said, noting they hope to get underway next fall. Restorations will take about a year to complete.

Coco Rocha: My kids are 'obsessed' with their baby sister