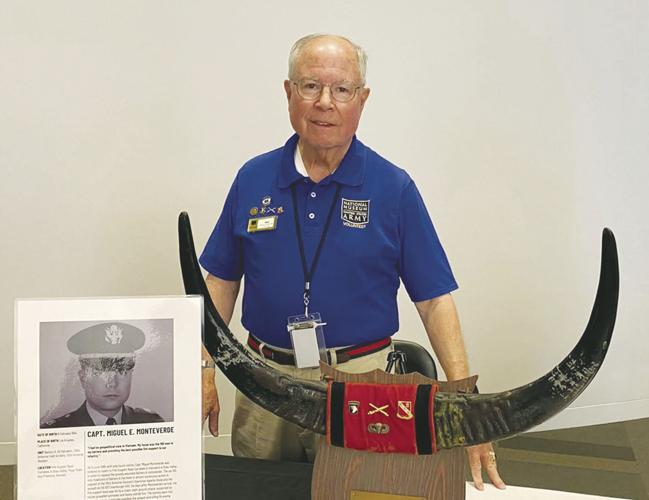 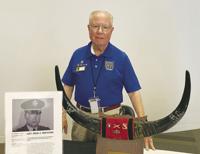 Retired Army Col. Miguel Monteverde recalled memories from his time in combat in Vietnam's A Shau Valley in 1968. 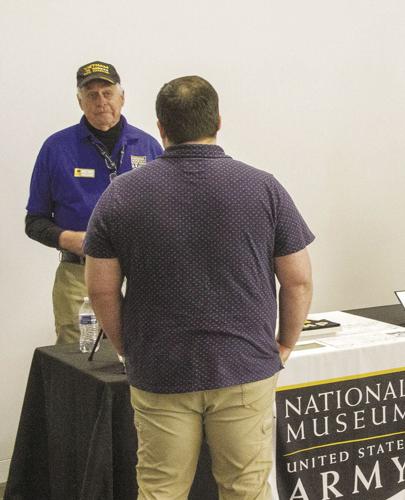 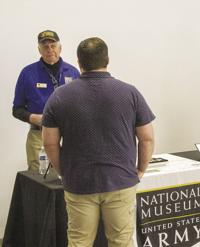 Bob Dunn speaks to a visitor about his experiences during the Vietnam War. Dunn served a year on night patrols with his German Shepherd partner, Duke, to guard an ammunition depot outside Saigon.

Retired Army Col. Miguel Monteverde recalled memories from his time in combat in Vietnam's A Shau Valley in 1968.

Bob Dunn speaks to a visitor about his experiences during the Vietnam War. Dunn served a year on night patrols with his German Shepherd partner, Duke, to guard an ammunition depot outside Saigon.

Retired Army Col. Miguel Monteverde spent an intense year in combat in Vietnam. As a 25-year-old artillery captain in the A Shau Valley during 1969, he commanded 100 men and a battery of six guns.

“We were attacked very heavily on the ground one night, mid-June 1969. And we fought just like the Civil War artillery,” said Monteverde, from Los Angeles. “Despite all our capability for firing long distance, we were firing right up close, and we successfully defeated that attack, with no fatalities of our own. The enemy suffered very heavy casualties, and they never attacked us on the ground again.”

Monteverde was among a dozen Vietnam veteran volunteers who shared relics and memories of the conflict at the National Museum of the U.S. Army at Fort Belvoir as part of Vietnam Veterans Day on March 29.

Well south of the A Shau Valley, near Saigon, Army Spc. 4 Bob Dunn of Milwaukee, Wisc., was an Army policeman and was “volun-told” that he would be a K-9 handler.

After training in Korea, he and his partner Duke, a German Shepherd sentry, spent most of a year with the 212th Military Police Company, on solitary night patrols guarding the Long Binh Ammunitions Depot, which Dunn called the “largest ammunitions depot in the world at that time.” (Coincidentally, the 212th MP Company is now assigned at Fort Belvoir.)

“We worked at night, by ourselves,” Dunn said. “We were the only friendlies at the perimeter as the first line of defense should something happen to the ammunition dump.”

After a year without injury to him or his partner, Dunn said it was one of his saddest days to finish his tour and leave Duke behind.

“I was with him more than I was with any other of the troops that I was assigned,” he added. “We played together; I worked with him on patrol by ourselves at night so he was my partner for that whole year – that was a very sad moment.”

Tammy Call, museum director, whose father was a Vietnam veteran, welcomed visitors to the daylong exhibition and said the war happened at a time of great social change in the country.

“The focus wasn't the same and the support wasn't the same. In previous wars, our veterans come home, and they come home to a hero’s welcome as they should,” she said. “Our Vietnam veterans deserve that same recognition. And they didn't get it at that time.”

Call added that she is pleased that the day of commemoration was formally established in 2017.

Monteverde, who said that his life on Army bases insulated him from much of the social protests, sadly noted how Vietnam-era veterans were not seen as heroes, as had been the case in prior conflicts, even though it wasn’t through their own doing.

“Soldiers go where their country sends them. And so I’m very glad now that we are beginning to recognize the contribution of the sons and daughters of America who fought in Vietnam,” Monteverde said.

Monteverde said he is proud to volunteer as part of Vietnam Veterans Day commemoration at the museum, which he said does a splendid job of telling the personal stories of soldiers and the collective sacrifices they made for the country.

“We think of the Army writ large as a monolithic organization. And when people are upset with national policy, they tend to throw rocks at the Army,” he added. “And those rocks end up hitting the young men and the women who are doing their best to defend the country. And … they’re not at fault.”

Kourtney Kardashian was 'super skinny' because of toxic relationships

Princess of Wales felt the pressure choosing names for her children

Anna Delvey granted bail but must find somewhere to stay