This article originally appeared on VirginiaMercury.com

It started with a Fox News story declaring that the state Department of Education was moving to eliminate all accelerated math classes before 11th grade, “effectively keeping higher-achieving students from advancing as they usually would in the school system.”

Republican leaders soon joined a chorus of dissenters. House Minority Leader Todd Gilbert criticized the department’s “plan to lower standards,” stating that “Virginians have had enough of the insatiable agenda to eliminate opportunities for students to excel in the quest to achieve mediocrity for all.” Republican gubernatorial candidate Glenn Youngkin slammed the decision in another statement, saying families across the state were “up in arms.”

However, according to VDOE officials, there hasn’t been any decision yet to change the state’s mathematics standards or curricula. Much of the original Fox story was based on critical social media posts from a member of the Loudoun County School Board. Those posts, in turn, were based on a statewide proposal called the Virginia Mathematics Pathways Initiative — an effort to modernize math education in public schools.

In a Monday briefing, state education officials were quick to emphasize that the initiative is still in development. Virginia’s superintendent of public instruction, James Lane, said a formal proposal had yet to come before him or the state Board of Education. Any change would be part of the state’s regularly scheduled revisions to its Standards of Learning — expectations for what students should master in every grade level — and wouldn’t make it into classrooms until the 2025-26 school year.

But in regional webinars, experts and department officials outlined significant potential changes to how math in Virginia is structured. One widely circulated graphic eliminated courses such as Algebra I and II in favor of “foundational” and “essential” math concepts, with more advanced classes — including calculus and geometry — not starting until the 11th grade.

In webinars, VDOE officials have been upfront that the initiative is based on data, especially standardized test scores that show Black, Hispanic and low-income students have lower pass rates on state math assessments than White and Asian students. Those critical of the initiative have argued that Virginia is lowering its standards in favor of certain students instead of improving instruction to help more children reach advanced courses.

The idea of reforming math education, though, isn’t new, and it wasn’t pioneered in Virginia. At least 22 states have explored the idea, which is based on decades of research on how traditional math coursework is failing students from many backgrounds.

What are ‘math pathways’ and what are they supposed to improve?

In Virginia, like much of the country, most math curriculum follows one traditional route. The Charles A. Dana Center at the University of Texas — whose research has informed pathways initiatives in multiple states — describes it as “a course in geometry sandwiched between two courses in algebra.” The larger goal is to send as many students as possible down the path toward calculus.

That’s because upper-level algebra courses are viewed as more rigorous by many colleges and often required for admission or to transfer credits. But over the years, educators have found that they alienate students who don’t need those courses in their future careers. Some, for example, might be better served by statistics classes that provide a strong foundation for the classes they’ll take in college. Other students might make the decision to stop taking math classes as soon as they can because the information just doesn’t apply to them.

“For some students, it’s just not relevant,” said Patricia Parker, who serves as an adviser for the Virginia initiative on behalf of the State Council of Higher Education for Virginia and Virginia Community College System. But even for advanced-track students, the status quo doesn’t always lead to success. According to the Dana Center, roughly a third of students at all public four-year colleges are placed in a remedial math course before they go on to college-level classes. That includes students who have taken courses like Algebra II and calculus in high school.

“What parents don’t know, or maybe don’t realize, is that so much mathematics gets retaken when you get to college,” Parker said. In 2015, VCCS embarked on its own effort to reform math education at the community college level after learning that many students weren’t gaining the background they needed in high school.

“What we learned was that it wasn’t the students’ ability to do calculus or not that was preventing them from being stellar engineers or stellar scientists,” Parker said. “It was that they were coming with weak foundational skills.”

Virginia’s pathways initiative is an effort to change that. Right now, it’s still a concept for VDOE, which means there’s no formal guidance or curricula for local school divisions. But a preliminary model suggests that from eighth to 10th grade, all students would focus on essential math concepts like data analysis, probability and algebra (“algebraic thinking” would be tied into most of the coursework, Parker said). In their junior and senior years, students could choose between half-credit and full-credit math courses depending on their interests and career plans. 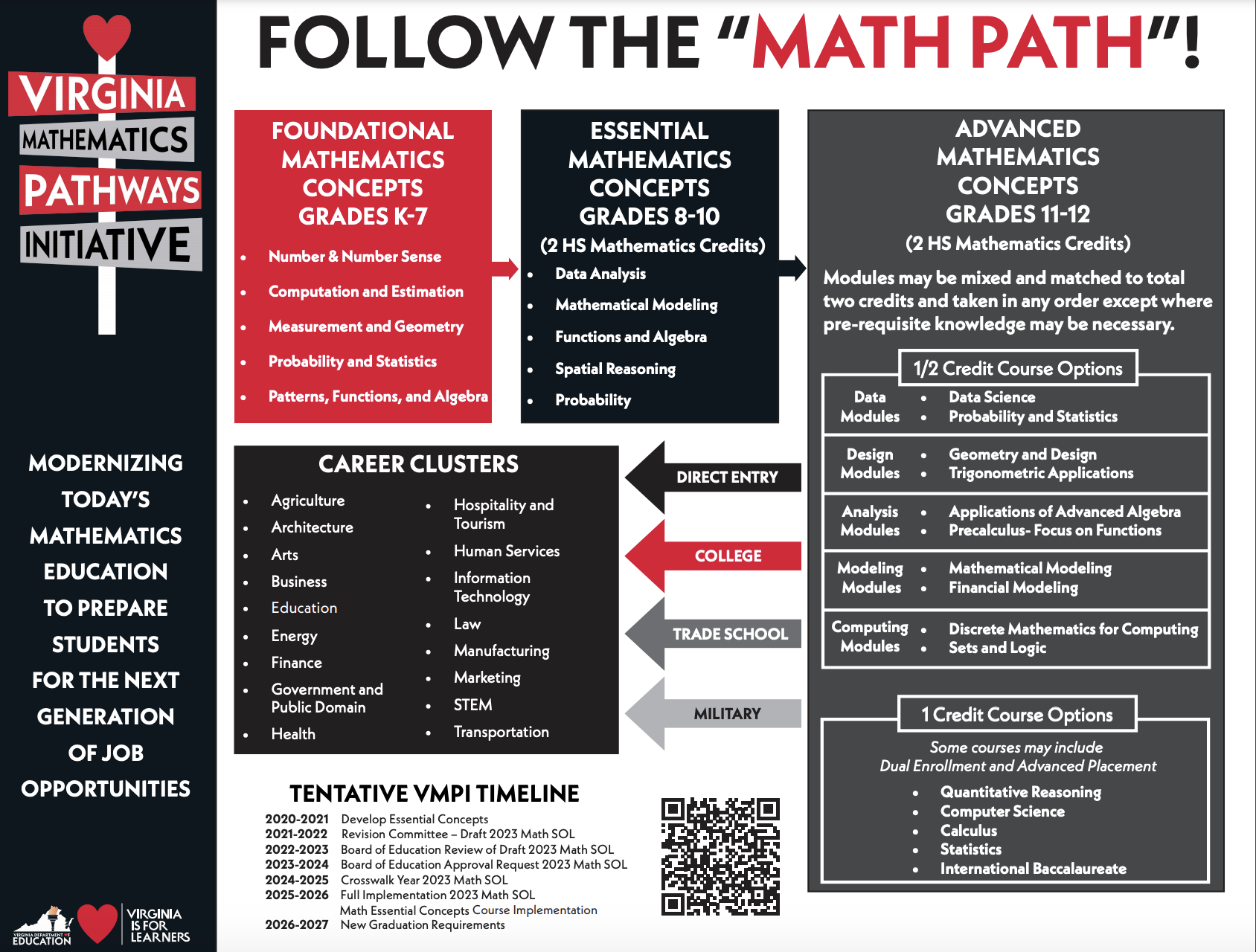 A graphic from the Virginia Department of Education outlines potential changes to the state’s math curriculum.

“So if I’m college-bound and I want that higher level math, in the course of four semesters, I can take pre-calc, Calc I, Calc II and statistics,” Parker said. But a student who dreams of cooking school and opening a restaurant might swap in a course on financial modeling. The end goal is to make math curriculum more rigorous for everyone, rather than placing some students on an accelerated track in a race towards calculus.

“It would be about taking those concepts and allowing students to go much deeper,” Lane said. “Virginia has been panned over the years for having a curriculum that’s a mile wide and an inch deep.”

What will happen to accelerated courses?

Nothing, according to Lane. It’s true that some math classes may be renamed or restructured under VMPI. But ultimately, local school districts retain the authority to develop accelerated programs and decide which students are eligible for them.

“Absolutely acceleration is not going away in mathematics courses in Virginia,” he said. “If a student needs an accelerated pathway, they will absolutely be able to do that.”

Since the initiative is still in the early phases of development, VDOE had few details on what implementation might look like. Parker said there’s a possibility that some students could be separated into a faster-paced version of essential math courses. But a core concept of the program is also making sure that math coursework is aligned with other classes.

According to Parker, that’s been a challenge for colleges, which often find that students can’t translate their math skills to other coursework (chemistry or physics, for example). So while acceleration isn’t going anywhere in Virginia, it might not always be right for students.

“Students can still get Calc I and can even get Calc II in 11th and 12th grade,” she said. “Which is when those higher-level math conversations should be happening. When they take these classes in eighth, ninth, 10th, they don’t have much to compare them to.”

Changes to Virginia’s Standards of Learning have to be approved by the state Board of Education — a step that’s still far in the future for VMPI. VDOE outlined a five-year process for the initiative, which would also require the department to draft new guidelines and model curricula. New graduation requirements wouldn’t go into effect until the 2027-27 school year, according to a tentative timeline.

It would also require coordination with Virginia colleges and universities. Higher education still largely informs traditional math coursework, which means colleges would need to implement complementary admissions criteria and transfer policies. According to Parker, SCHEV has already held webinars on the initiative with math, engineering and teaching faculty across the state — all of whom were largely supportive of the idea, she said.

The next step, in June or July, is to tackle admissions departments.

“We’ve requested a meeting with the admissions deans of the universities to help them understand what the profile of a student will look like in the future,” she said. SCHEV also researched which out-of-state colleges are most popular among Virginia students and has plans to communicate with those schools.

“All of those things are critical, but other states have done this,” Parker said. “We’re not the first, and we’re certainly not the last.”

A couple thoughts on this:

1. Incredibly misleading headline. The key word, "yet", is buried in the article. "...there hasn’t been any decision YET to change the state’s mathematics standards or curricula." That doesn't mean it's not coming. C'mon Inside NoVa - you can write better headlines! One word would make all the difference: "Virginia isn't NECESSARILY eliminating accelerated math courses".

2. Upon further study of the infographic, the pathways look sound **if decoupled from grade or age**. In other words, on the face of it, the attempt to modernize appears to be very well thought out and makes a lot of sense. The problem comes in when they couple grade and/or age with the pathways, thereby preventing more proficient students from advancing through the pathways at a quicker pace.

Please understand - these thoughts are coming from a person who did NOT excel in mathematics. I would shudder to think what would happen to this country if my more math-proficient classmates had been forced to drag along my math learning pace. I'm a lot better than them at certain things, but back then they were a lot better than me at math (and probably still are).

Let's not throw the baby out with the bathwater. The baby (the learning paths) is quite sensible. The bathwater, however, needs to be changed, because right now it's soiled with the idea that the more math-minded among us should be forced to wait on the rest of us, which is utter nonsense.

The article refuted nothing, plus it doesn't mention how part of the plan entails doing away with small groups at the elementary level. So if you have an intelligent kid, they will no longer be able to branch off and advance with other similarly intelligent kids. Rather, they'll only advance at the rate of the entire class, which equates to advancing at the same level as the least intelligent kids in the class.

I mean, the VDOE website on Friday ABSOLUTELY said it was going to cancel accelerated classes. Now they are backtracking and blaming Fox News. Give me a break

The fake news right wing media, has continually tried to fearmonger their way back into power, Virginia and her citizens know much better than that.

LOL! OK... unlike all those kind and charitable souls in the left wing media? One thing is for sure - where I live, this particular story has people from all over the political spectrum - left, right, and center - up in arms.

Katherine Schwarzenegger Pratt: I knew Chris Pratt was the one 'right away'

‘9-1-1’s Peter Krause on Obstacles in Bobby & Athena’s Marriage, Plus Is [Spoiler] Dead?