You are the owner of this article.
Edit Article Add New Article
You have permission to edit this article.
Edit
Home
News
Sports
Life & Events
Obituaries
Special Publications
Jobs
Marketplace
Legal Notices
About Us
InsideNoVaTix
Search

Virginia reported its 300,000th COVID-19 case on Saturday, just 35 days after topping 200,000, and a new model from the University of Virginia predicts the state will see tens of thousands of new cases this winter before vaccinations begin to take effect.

The recent huge surge in cases statewide continues to translate into increased hospitalizations and deaths related to the coronavirus.

The Virginia Hospital and Healthcare Association reported a record 2,429 patients being treated in state hospitals for COVID-19 on Saturday. That's up about 300 from last Saturday and nearly 600 from two weeks ago.  And the Virginia Department of Health has reported 90 new deaths related to the virus in the past two days and 234 in the past week, one of the highest weekly numbers since the pandemic started.

Meanwhile, the new model from U.Va.'s Biocomplexity Institute, released Friday, predicts that the post-Thanksgiving surge could lead to devastating impacts in January and February, with weekly new cases peaking somewhere between 68,000 and 98,000 in late January or early February. That would be three to four times the current caseload.

"Cold weather, time indoors, and pandemic fatigue, spurred by holiday travel and gatherings, increase the risk of transmission," the U.Va. report stated. "Meanwhile, the impact of new vaccines, while promising, will not be felt for several months. These risks have now been realized. Early data indicates that the post-Thanksgiving surge is large. If compounded with surges accompanying Christmas, Hanukkah and other winter holidays, it could be a long, cold winter."

The U.Va. report noted that mitigation strategies, such as avoiding large gatherings and wearing masks, will have more impact on case numbers than the vaccine during the winter.  The initial tier of vaccinations is just for health-care workers and long-term care residents. Gov. Ralph Northam's enhanced restrictions on gatherings, along with a curfew between midnight and 5 a.m., took effect Monday.

"The vaccine will have limited impact until late spring or summer," the report stated. "In the meantime, cases, hospitalizations, and deaths will continue to rise. We will need to continue to take steps to flatten the curve and see us through to spring. The good news is the effect of behavioral and community mitigation strategies, which will have a much larger impact on transmission for the foreseeable future, are enhanced as the vaccine rolls out."

In total, the model predicts 402,000 new cases in 2021, with most of those occurring in the early months of the year.  If that number is accurate, it means over 700,000 Virginians will have contracted the virus, representing just less than 10% of the state's population.

The U.Va. model was prepared based on data through Dec. 14, and caseloads have fallen slightly this week from their post-Thanksgiving highs, according to the Virginia Department of Health.

The state's seven-day average of new cases stands at 3,479.6, below the peak of 3,920.3 reached Dec. 12. The average has fallen at least slightly every day since then, although it's still almost three times the spring peak.

In Northern Virginia, the data are following a similar trend.  The health department reported 768 new cases Saturday, following 797 on Friday. The region's seven-day average is at 855.4, also down from its record high of 1,124.4 set Dec. 12.   All other regions of the state are slightly below their record highs as well.

The health department reported 45 new deaths statewide related to the virus both Friday and Saturday.  Of the new deaths, six were in Northern Virginia (three Friday and three Saturday): four total in Fairfax County and one apiece in Arlington County and Alexandria.

Test positivity rates both statewide and in Northern Virginia continue to track in a relatively narrow range, where they have been since Thanksgiving. 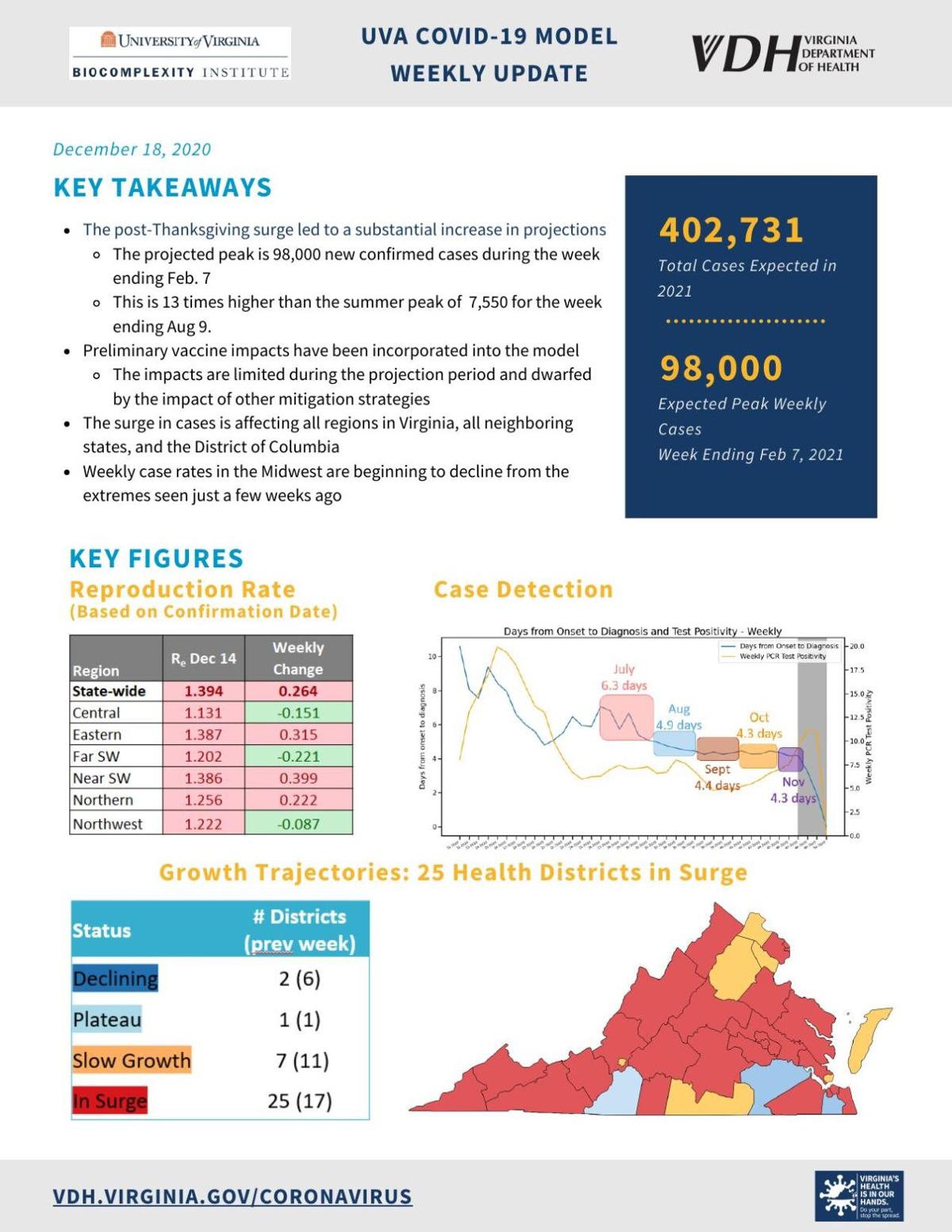