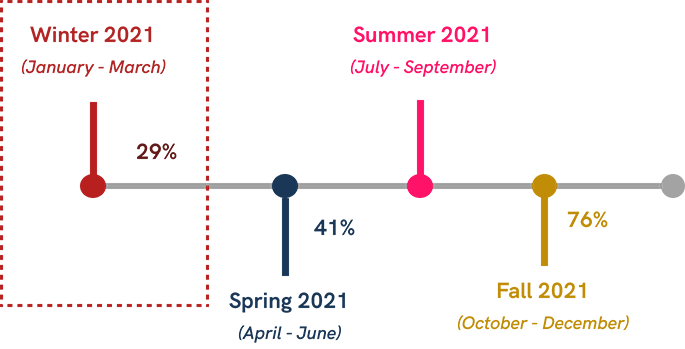 Employers in the Washington, Baltimore and Richmond metro areas expect nearly three-quarters of their staff to be back in the work place by fall, according to a new survey from the Greater Washington Partnership released Thursday. 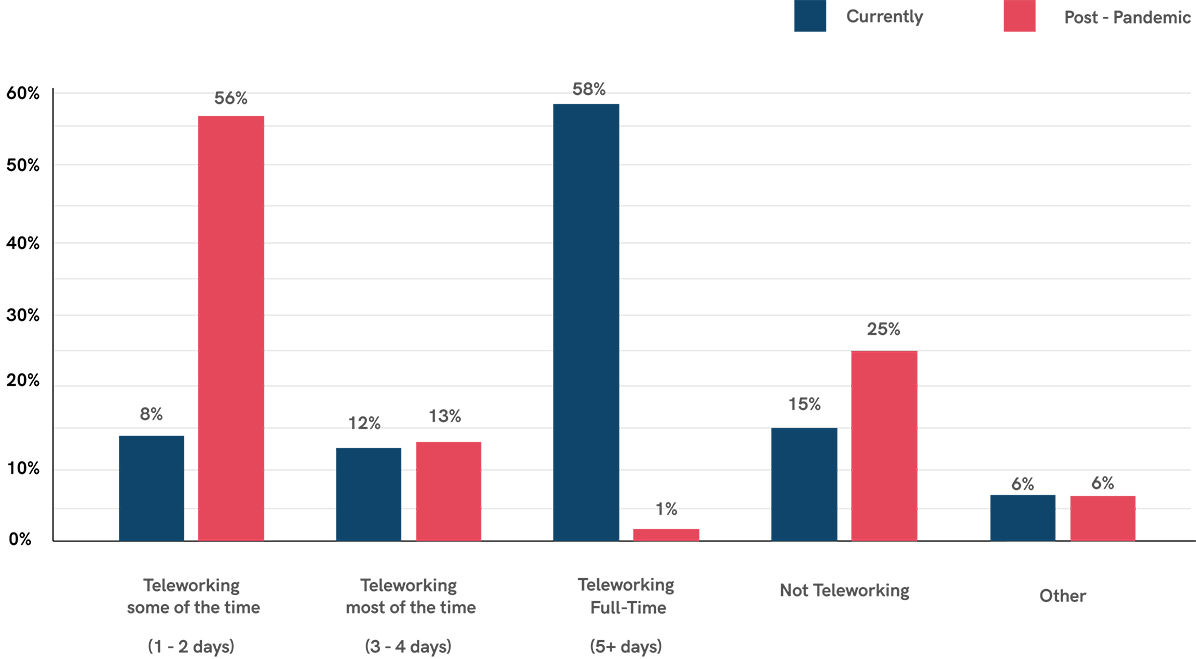 Only 1% of employers expect to allow employees to telework full-time once the COVID-19 pandemic is over.

Employers across the Washington area anticipate only 29% of their workforce to return physically to the workplace this winter but that the majority of their employees will return in-person by the fall, according to survey results released Thursday.

The Greater Washington Partnership, in collaboration with the consulting firm EY and 24 partner organizations, including top public transit agencies and local chambers of commerce, surveyed 172 employers from the Washington, Baltimore, and Richmond areas about their reopening and resiliency plans.

“I would not be surprised at all if we were well into the summer before we're back into our offices in any measurable numbers,” said Kevin Virostek, a managing partner for EY's Greater Washington area offices, said during a news briefing to discuss the results.

The respondents represent 139,000 employees who work across a number of different industries, including construction, universities, and health centers.

Maricelly DiGravio, a research manager at The Greater Washington Partnership, said that most of the employees represented in the survey are currently teleworking. But most employers in the Washington area will pursue a phased approach to reopening that lets their workers return safely over the next six to nine months. Larger employers, however, generally expressed more caution about bringing workers back than smaller employers.

“We asked [employers] what were their biggest drivers in terms of keeping their offices and reopening their offices,” DiGravio said. “And the vast majority said vaccines, schools, and also the employee sentiment has been shaping a lot of their reopening plans.”

DiGravio noted that when the partnership first surveyed employers in August, most of the respondents said they expected that at least half of their workforce to return to their respective workplaces by the winter. But these plans have been delayed.

“This is absolutely expected given the range of [COVID-19] cases and schools still being closed,” she added.

In the second survey, conducted from mid-November through mid-December, DiGravio said employers in the Washington area are now planning for 76% of their employees to be back in-person by the fall.

According to the survey, 56% of employers said they would still allow most of their employees to telework one or two days a week but are concerned about employee mental health, lack of opportunities for collaboration, and organizational culture loss. The majority of employers said these factors were more concerning than productivity, revenue, and loss of customers.

“So, there is definitely a craving for a collaboration environment to be in place to be exchanging ideas,” DiGravio said. “Favoring the office is ... a pretty strong theme in the survey itself.”

Most employers said that when their employees returned in-person, they would implement rapid COVID-19 testing and improve ventilation systems to create safer worksites as part of their resiliency plans. Over half (56%) believe that rapid testing that delivers immediate results at the point of care is the top solution to keep worksites safe.

“[Employers] are also being influenced by their workforce in terms of what is the risk of having employees commute every day,” DiGravio said.

In addition to the employer survey data, the partnership also released an updated Transit Tracker to help Washington-area commuters identify the safest times to use Metro and other public transit services.

John Hillegass, an associate of transportation policy for the partnership, said that the technology should make commuters feel more comfortable using Metro and other transit services by presenting data in real-time so employers and employees can plan their schedules.

“We think this data can really help decision-makers understand the pace of the return to work sites,”  Hillegass said.

Northern Virginia residents age 65 and over or younger residents with co-morbidities are now eligible to receive the COVID-19 vaccine, Gov. Ra…

Cardi B: I want to launch my own app