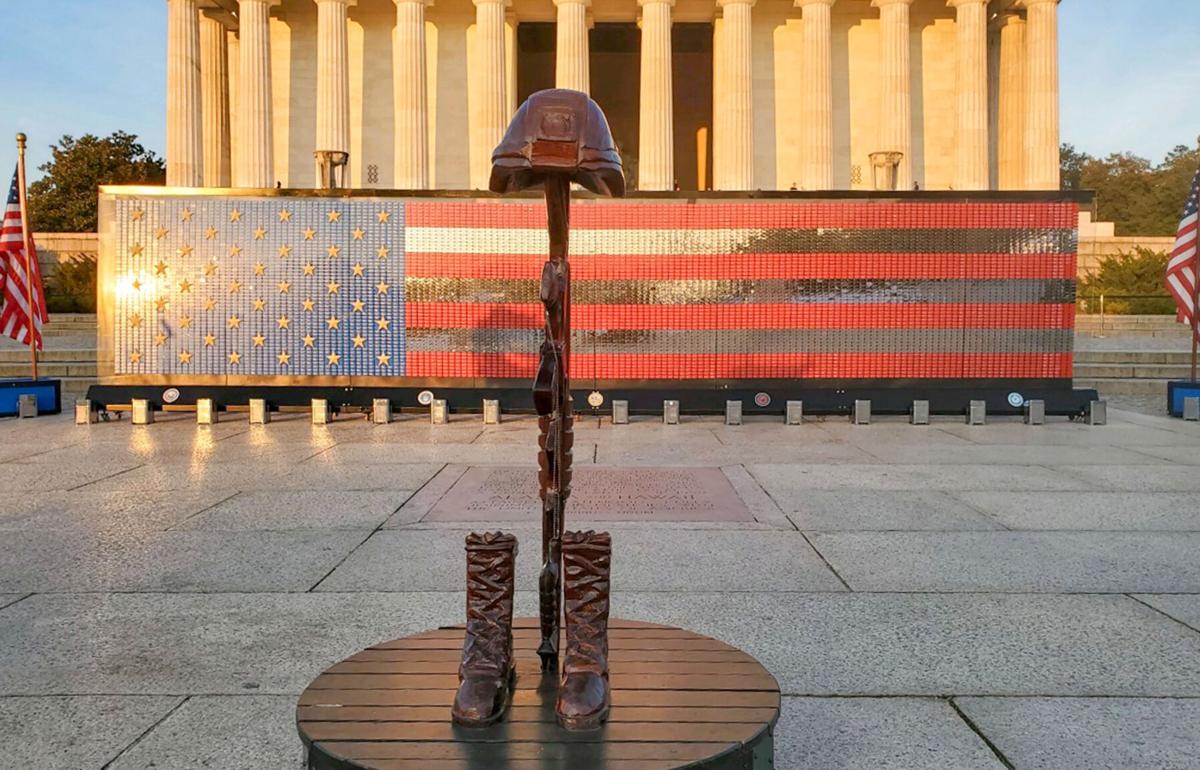 The morning sun glints across the Fallen Heroes Memorial in front of the Lincoln Memorial on Veterans Day, with the mahogany sculpture of a battlefield cross in front, sculpted by Alicia Dietz. 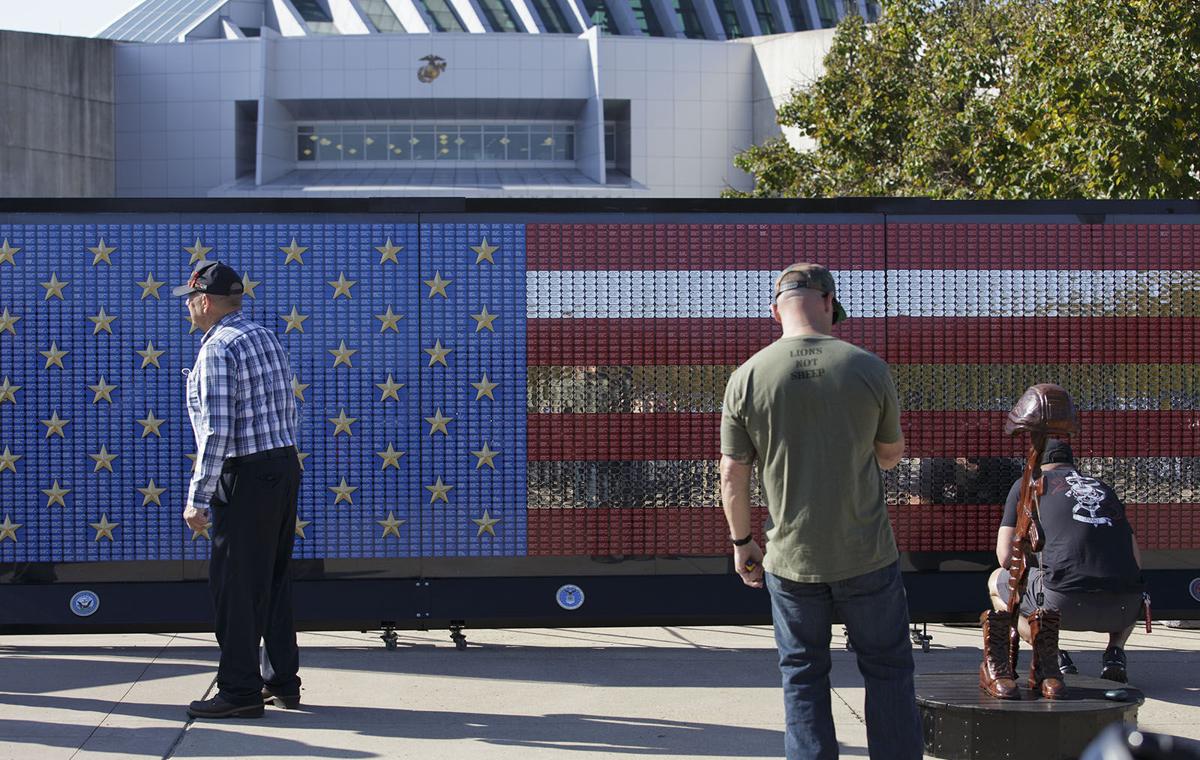 Visitors paused at the VAU Fallen Heroes Memorial temporarily on display in front of the National Museum of the Marine Corps, Nov. 10. The flag contains the names of more than 7,000 killed in action during the Global War on Terror. 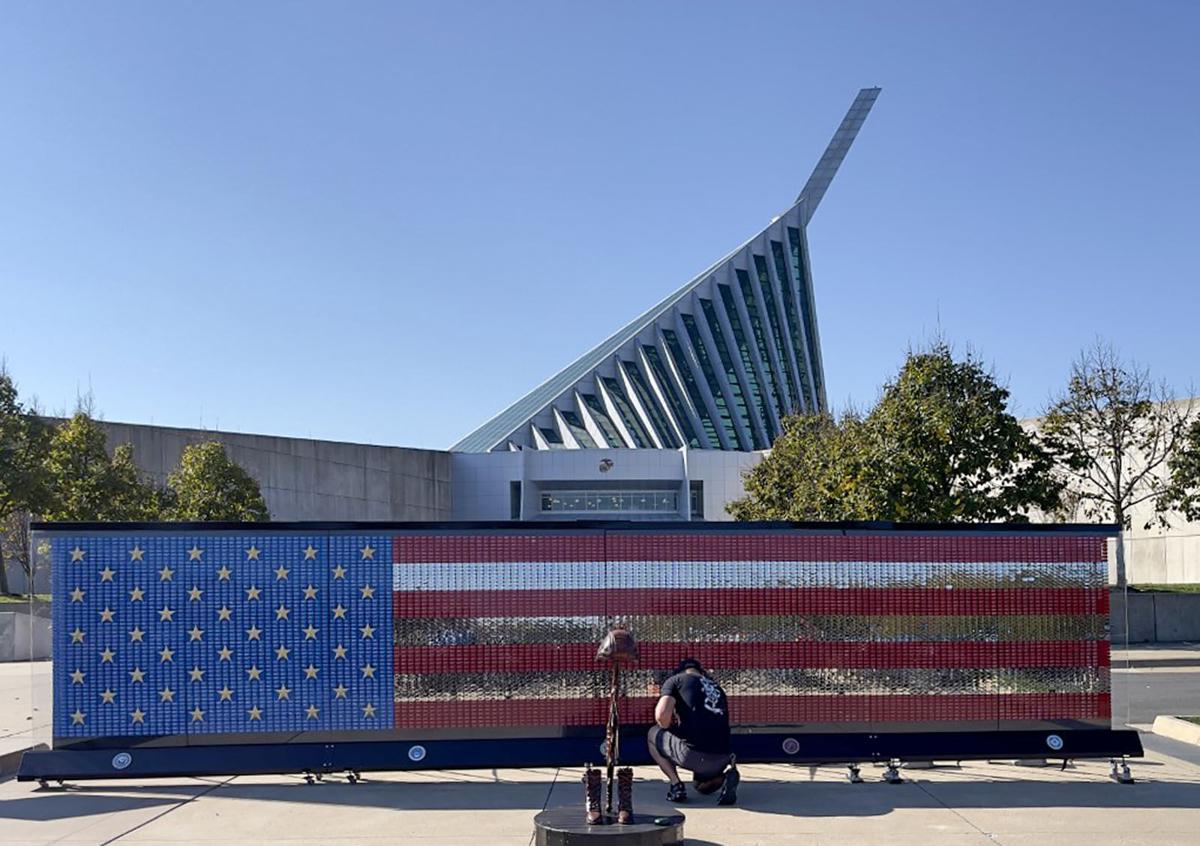 Veterans and Athletes United brings its Fallen Heroes Memorial to the National Museum of the Marine Corps, Nov. 10. The 28-by-6 foot flag is created with more than 7,000 dog tags containing the name of everyone killed in action during the Global War on Terror. 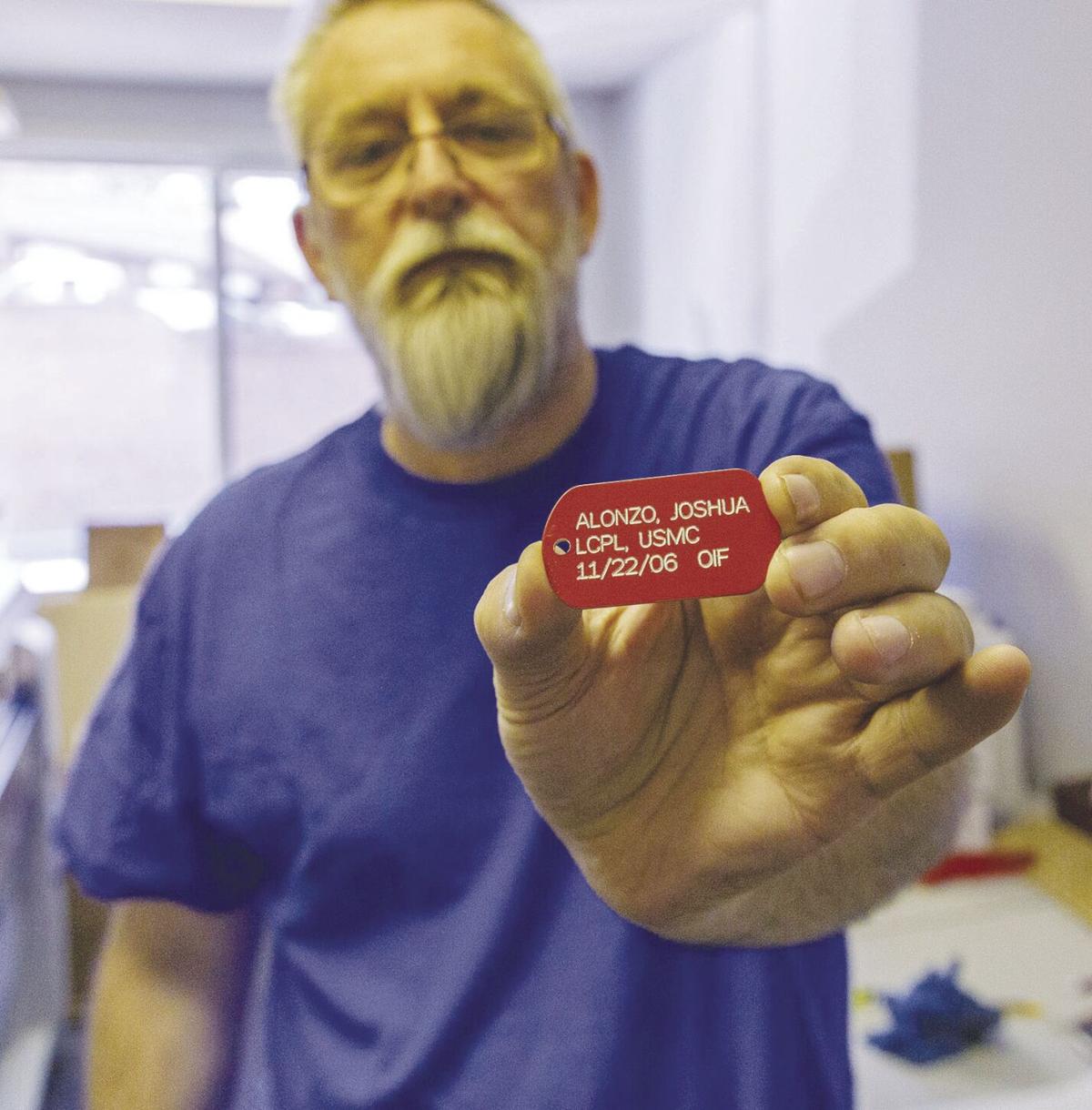 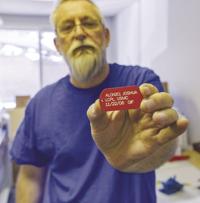 Greg Frye, owner of One Stop Awards and Apparel in Woodbridge, holds up one of the 7,000 dog tags he engraved for the Fallen Heroes Memorial.

Greg Frye, owner of One Stop Awards and Apparel in Woodbridge, still remembers the phone call.

James Howard of Richmond had been reaching out nationwide, but no one was budging much on their prices. Howard explained to Frye that each dog tag would name a fallen warrior in the Global War on Terror for a new memorial Howard was in charge of developing.

Frye received bags and bags of blue, silver and red dog tags. It took about two minutes for his engraving machine to document each tag with what had been left behind: last name, first name, rank, branch and the date the service member was killed in action, along with an initial identifying the campaign, such as Operation Desert Storm, Iraqi Freedom or Enduring Freedom.

With his only engraving machine, Frye said he, his daughter, Sharon, and her friend took turns keeping the engraver running nonstop through more than two months of eight- to 10-hour days to create the wall of names, which was completed in 2018.

“Behind each tag is a story, and as I engraved the tag, I would look at the name and date, then wonder what is the story behind that one piece of metal,” Frye said in the workspace behind his trophy shop showroom, where he engraves and laser-etches objects for companies throughout the region. “The memorial allows us a way to bring that together, and an opportunity to let people tell some of their stories.”

For the birthday of the U.S. Marine Corps on Nov. 10, Howard’s organization, Veterans and Athletes United, brought its Fallen Heroes Memorial from Richmond to the National Museum of the Marine Corps in Triangle.

The 7,000 blue, red and chrome dog tags sparkled in the Virginia sun behind 50 gold stars. At nearly 30 feet wide, this wall of names is just 6 feet high, symbolizing the shape of the American flag when draped on a fallen service member’s casket.

Studying the names up close, with the museum’s own symbolic flagpole thrusting into the blue sky, Tony Compo, a master gunnery sergeant who lives in Triangle, said it’s a powerful tribute to the fallen.

“This memorial is great – it puts it out there so nobody forgets. I like that it’s front and center out here in front of the Marine museum,” Compo said. “It’s the first thing you see when you walk into the museum, which is already phenomenal, so this is great.”

Howard is a veteran who medically retired after an improvised explosive device and a firefight left him a quadriplegic, and he wanted to complete his mission.

“I feel that I failed early and let my brothers down, so I’m trying to fill that void and serve in another way,” Howard told InsideNoVa after returning to his Richmond home after his team displayed the memorial at the steps of the Lincoln Memorial on Veterans Day.

“I was fortunate enough to have many people around me to make this possible,” Howard said. And Frye is at the top of the list. “Of all the companies I went to nationwide, he really stood out. A lot of people tried to make money off this project, but not Greg.”

Howard’s organization accepts donations, and the funds raised go to a couple of outstanding Blue Star Families organizations, as well as the National Global War on Terror Memorial Foundation, which has a mission to build a permanent memorial on the National Mall.

And while U.S. troops are no longer in Afghanistan, the impact of the war on terror is still being felt.

Last month, Howard called Frye back because he needed more dog tags to add to the wall. During a small ceremony on his Richmond property, where he also conducts wounded warrior workshops, the organization added 13 names from the Aug. 29 attack in Kabul, along with the names of 10 others slain overseas.

“I have a lot of friends on that flag,” Howard said softly. “This helps remind us all of the price of freedom and I’m blessed to have so many good people around me that made it possible.”

Learn more about the Global War on Terror Memorial Foundation at gwotmemorialfoundation.org