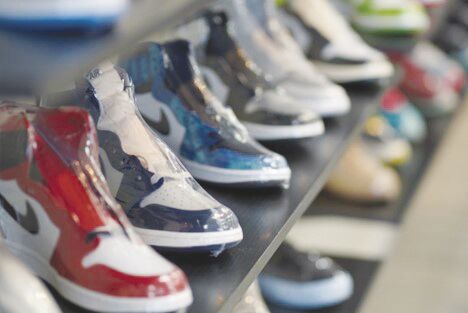 The Re-Up Sneaker Boutique has hundreds of pairs of sneakers in inventory. 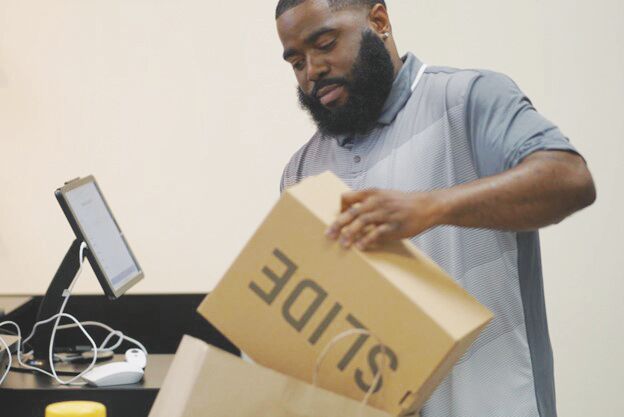 James Gerrald Jr. and Christian Henderson are both from Woodbridge, so when they decided to open a sneaker store, there was no doubt where they would locate.

“It was important for us to be in Woodbridge because that’s where our heaviest customer base [is], and we were raised there,” said Gerrald, co-owner of the Re-Up Sneaker Boutique. “We built our friendship right there in Woodbridge, we attended schools there. We felt like it was the right thing to have our initial store where it all started.”

Gerrald attended Montclair Elementary and Woodbridge Middle schools, while co-owner Christan Henderson went to Drew Elementary and Godwin Middle. They both graduated from Gar-Field High and now live in Woodbridge.

Gerrald, known in the sneaker game by his alias Amani Fox, has been doing business for more than a decade. He and Henderson first operated their shop online while Henderson worked at Sprint and Gerrald as an aviation project manager, which he has continued.

They started hunting down storefronts a few years ago because business was booming, and they saw the chance to do more. The duo realized that the shoe stores in Potomac Mills lacked some new sneaker releases, like Jordans.

The Re-Up buys, sells and trades new noteworthy sneakers to “[provide] a product that people seek but have trouble obtaining,” Gerrald said. The store specializes in rare shoes but also offers ubiquitous sneakers in addition to accessories and clothes from brands like Supreme, BAPE and Essentials.

After a successful grand opening in early June, the owners are focused on the future. They have plans to get direct inventory from the brands they offer, collaborate with local high schools, organize back-to-school drives and embrace the community by welcoming young adults to intern and volunteer.

Their internship opportunities are adapted to each participants’ interests. “We want to get them exposed to entrepreneurship… [so they] know how it goes from a business and financial standpoint,” Gerrald said. It’s also about “[giving] them the opportunity to look forward to [something].”

It comes back to Gerrald’s experiences working at a young age and the independence that making his own money afforded him. “I just want to be a steward for the community and give them an opportunity because the opportunities were afforded to me as a youth … People extending that to me, it’s only right that I do the same and give back to them,” he said.

The Re-Up’s opportunity is through sneakers because fashion remains relevant and allows individual expression. “They can come as they are and express themselves,” Gerrald said of interns and volunteers. The Re-Up welcomes anyone to bring their skills or develop new ones, the experience is flexible.

In addition to having high school interns this summer, the store also hopes to partner with local businesses, such as Inspired Art Barber Shop. Inspired Art co-owner Steve Zeiders has known Gerrald and Henderson for years and has been a Re-Up customer for almost as long.

Zeiders said of the store, “It’s not just about what you see on the wall. If there is something specific that you are looking for, they will go above and beyond to satisfy your needs.”

He also appreciates the Re-Up’s attention to detail and people-centered approach. “You are dealing with professionals who are businessmen and authentic. You get the real deal over there and they genuinely care about each client.”

He noted that Re-Up has partnered with Inspired Art on back-to-school drives. “Helping our community and giving back is vital, and they understand that,” Zeiders added.

Gerrald said the store hopes to build inclusion in the community. “Everyone wants to be a part of something and feel included … Please feel free to come by. You don’t have to be a customer to come into the store. Come chat with us.”

The Re-Up Sneaker Boutique is at 1983 Daniel Stuart Square in the Market at Opitz Crossing or online at reupcollection.com.