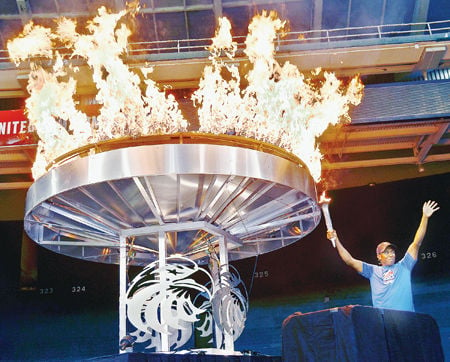 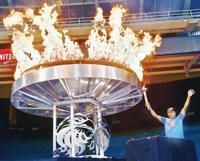 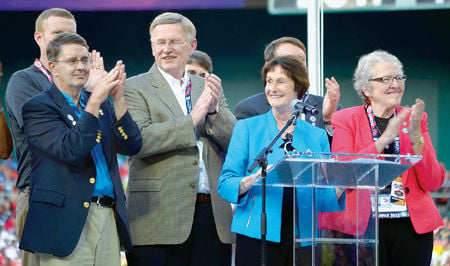 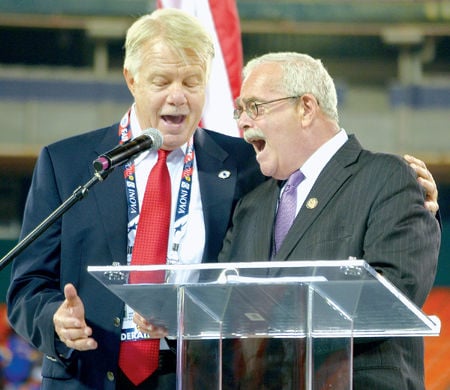 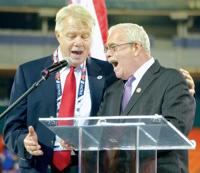 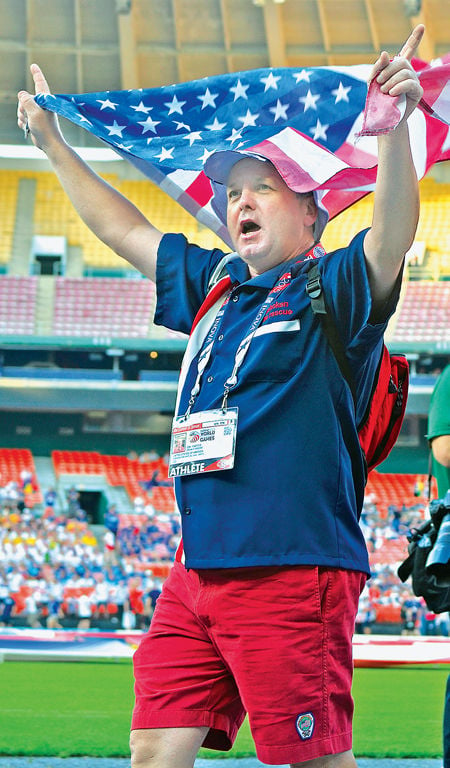 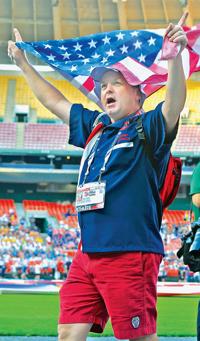 “It is going to be an awesome couple of weeks here,” said master of ceremonies Aaron Gilchrist as he led off the proceedings.

Participants and spectators who entered the stadium from its west side could gawk at a giant U.S. flag and a similar-sized white banner with the Games’ blue logo, both of which were suspended between the raised ladders of fire trucks from Fairfax County Fire and Rescue Department stations in Tysons Corner and Baileys Crossroads.

About half of the three-hour-long event was devoted to the initial procession of athletes into the stadium. Participants marched in alphabetical order by country and most teams brought their own sense of fashion and enthusiasm. Quite a few of the athletes took selfies and videos of the proceedings using outstretched smartphones.

Many athletes tossed souvenirs into the crowd as they passed by. These ranged from rubber balls, hats and T-shirts to flying disks and shoulder patches from their departments.

Joe Minoso, an actor who stars on the NBC show “Chicago Fire,” recounted how shouldering 75 pounds’ worth of equipment clued him in as to how demanding firefighting really is.

“I started to realize how much of a family they are and how much they like to pick on each other,” he said. “They look fear in the face, look the dragon in the eye.”

Fairfax County Board of Supervisors Chairman Sharon Bulova (D) said the county, where many of the athletic events will be held,

is proud to host and relieved the Games finally have arrived. “I don’t think anyone anticipated the magnitude of what these games would mean for us,” Bulova said.

David Rohrer, deputy Fairfax County executive for public safety, noted that first responders the world over share the values of compassion, caring, devotion to duty and desire to make a difference.

“We hope that your example inspires the next generation to serve,” said Rohrer, who spent 32 years with the Fairfax County Police Department, ending up as its chief. Organizers played several videos during interludes in the program. Some highlighted the Washington area’s rich history, others replayed footage from the 9/11 terrorist attacks and emphasized the dangers faced and sacrifices made by first responders.

Former U.S. Secretary of State Colin Powell told the crowd how he learned of the 9/11 attacks while attending a conference in Lima, Peru. The police and firefighters who dies in New York City that day were brave and represented the values of all first responders, he said.

“Your work is noble,” Powell said. “As you compete, remember those professionals . . . who have fallen.”

Powell asked the audience to stand and observe a moment of silence for first responders who have died in the line of duty. The Northern Virginia Firefighters Emerald Society Pipe Band then played three refrains of “Amazing Grace” on the bagpipes.

At one point in the program, three law-enforcement helicopters flew directly over the stadium, seemingly skimming the roof. Naturalists in the crowd also may have been amused by a dogfight between a crow and a larger bird of prey, which occurred not far above participating countries’ flags that were spread out on the infield.

After organizers inducted 12 athletes into the Games’ first-ever Hall of Fame class and had participants recite the event’s oath, Battalion Chief Jerome Williams of the Fairfax County Fire and Rescue Department lighted the ceremonial metal torch, which generated considerable heat as it was hoisted aloft by a hydraulic lift.

“This is an opportunity for competitors around the world to come together and compete in athletics in a peaceful way,” Connolly said, adding that this example could serve as a model for other human endeavors.

Don't need or want Third World human waste instructing Local human waste into how to get away with shooting unarmed persons in Notthern VA.

How many millions will taxpayers pay local law enforcement to chaperone this event?

And how many millions of dollars will this event bring in? My guess is quite a bit. Now go away.

Actually just saw an article in the WAPO where over 55 million is expected for this area due to these games. Feel stupid now Penny? You should.

Salma Hayek on the secret to her marriage: 'We've never said anything nasty to each other'