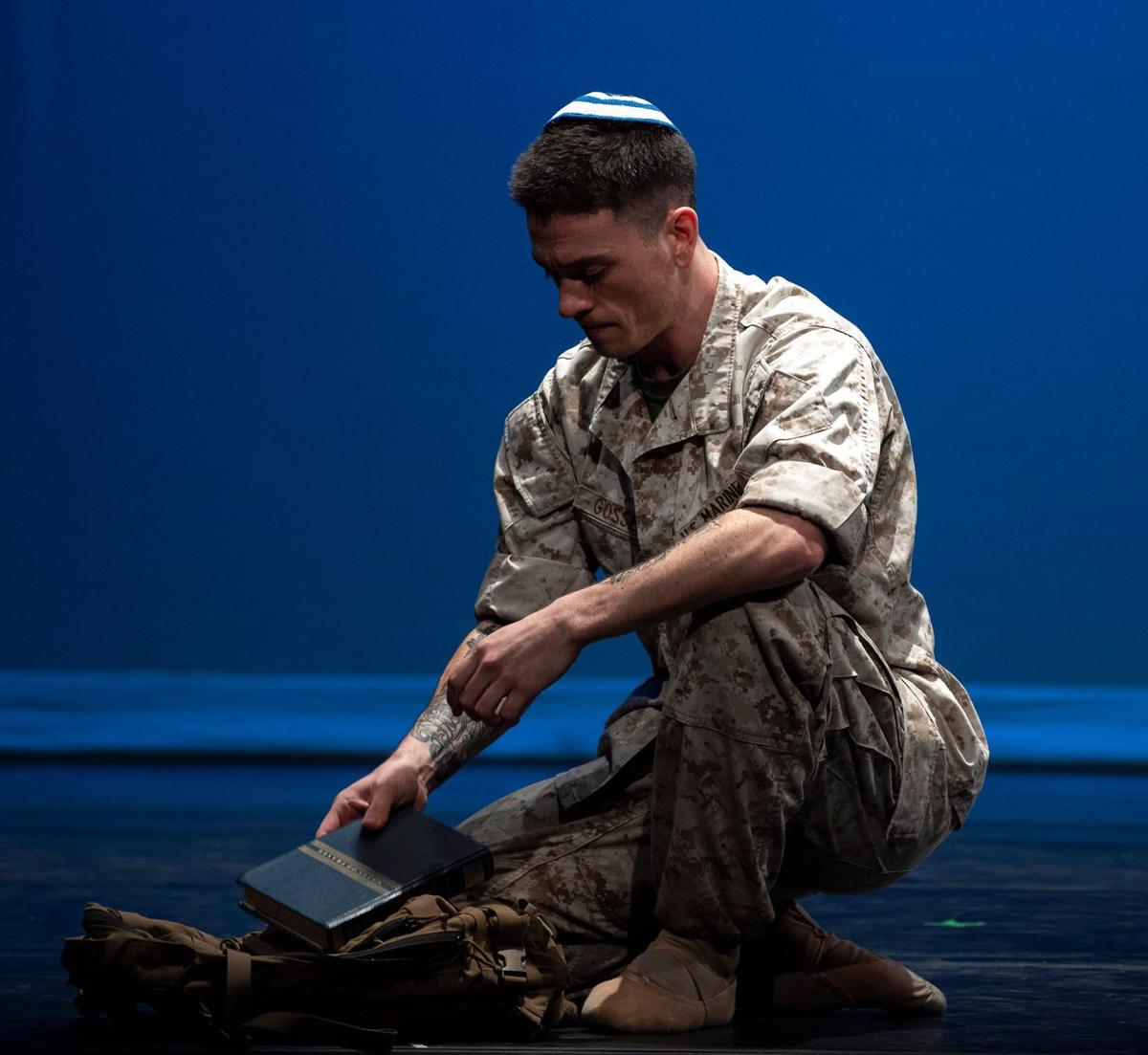 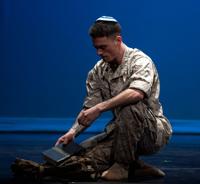 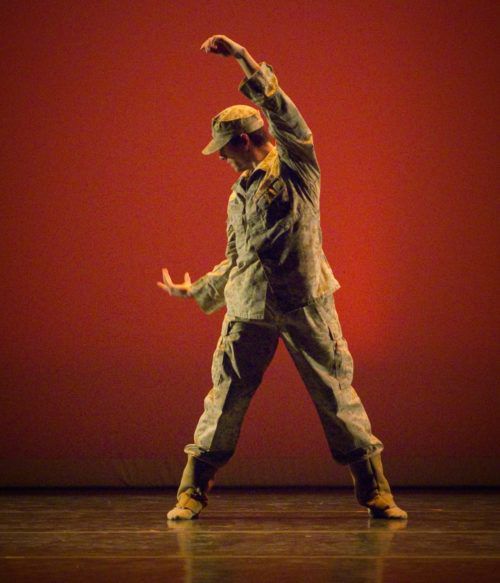 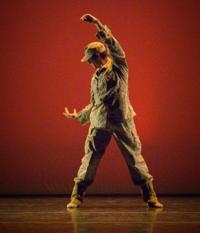 Colin’s Marine unit- Amy compared the “corps de ballet” dancing as one body to the Marine Corps training and serving as one body. (photographer- Melephoto) 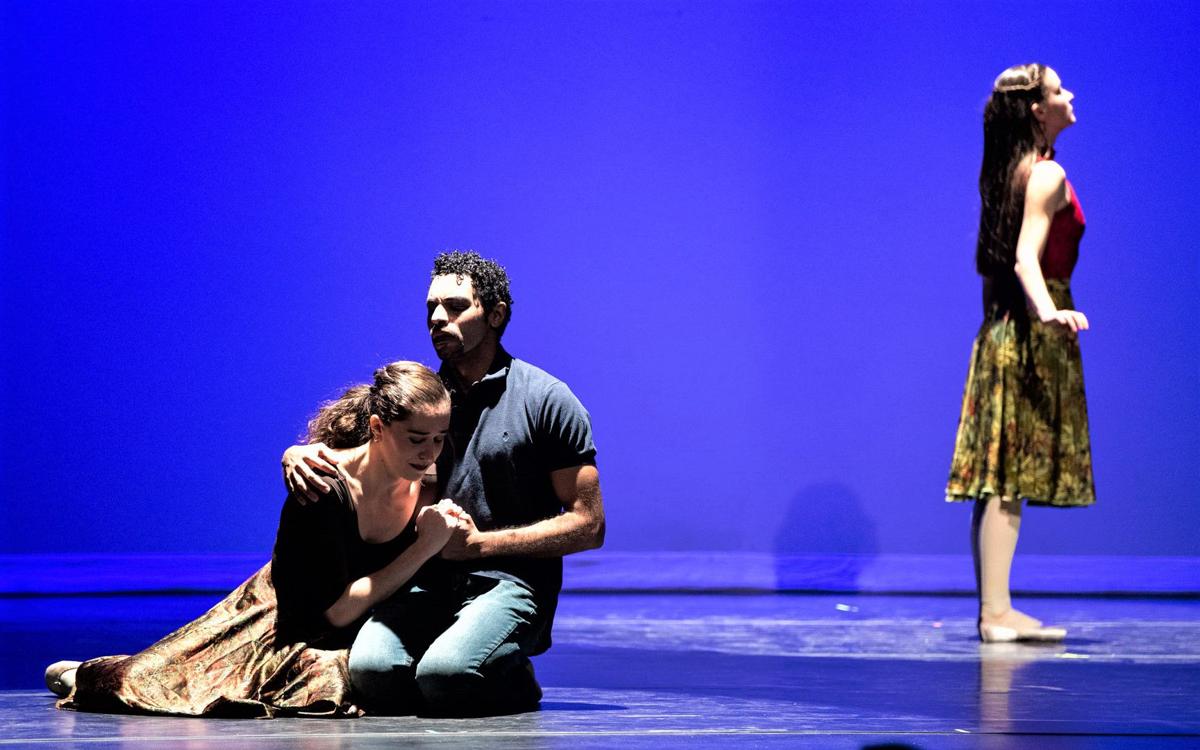 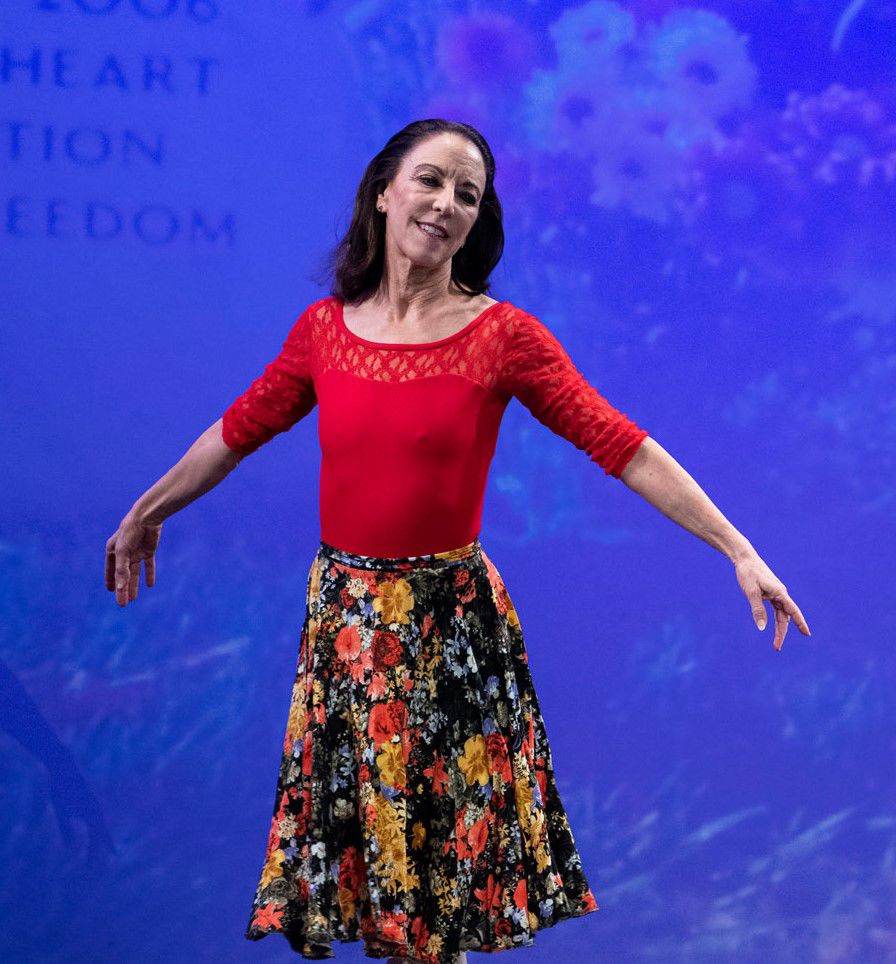 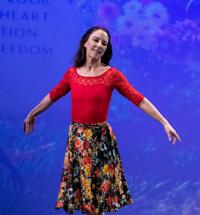 “Colin: Son, Marine, Hero” was conceived by Manassas Ballet Theatre’s artistic director Amy Grant Wolfe as an expression of a mother’s love.   The ballet began as a one act performance in 2013, grew to two acts in 2014 and expanded to its present full-length structure with professional dancer Joshua Burnham in the leading role.  When members, also mothers, of the Bender Jewish Community Center in Rockville invited MBT to share the program with their community, the company traveled — and yet another perspective of the work evolved.

As put forth at the Q&A post-matinee on Sunday, Jan. 26, “Colin” has become a story of love, family, religion, country, friends and community.   This began in Manassas with Colin’s life as the son of Amy and Mark Wolfe (MBT’s executive director and Manassas councilman), a ballet dancer, and a high school freshman on Sept. 11, 2001, when so many lives were forever changed. He decided that upon graduation, “I will be a Marine.”  After basic training, Colin deployed to Iraq in 2006. Tragically, he was killed by a roadside bomb after volunteering for a morning patrol.

The emotions brought forth from the ballet’s scenes are deepened by audience’s own personal connections.  There were many authentic moments portrayed in the ballet — the courtship of Amy and Mark; the siblings and friends interacting with playful banter, pouting, comforting and defending one another; the depth of a mother’s love for her son; the foreshadowing and grief when the Marines come to the Wolfes’ Manassas home; the new love of Kira and Colin before he deploys; and Colin providing support for fellow Marines during training as he had with his sister and childhood friends.  These scenes and others resonated with the cast and audience members, including the two Marines from Quantico fulfilling the role of those who came to Manassas at 4:30 a.m. on Aug. 31, 2006.

Some of the coincidences that have enriched the story include a chance meeting of fellow Marine Steven Hill visiting Colin’s grave at Arlington when Amy and Mark arrived for the same reason; Colin’s uniform fitting Josh just right for his portrayal and Josh being the same age as Colin would have been each time he performs the ballet; one of the Marines who represented the two who made the notification during the most recent performance just happened to attend the “Nutcracker Salute to the Military” performance in December and offered Mark his support; and Amy having a close friend in world-renowned composer Mark Menza to create the musical score.

There has been both regional and national news media coverage of the ballet.  A review January 2020 in Washington Jewish Week gave a religious perspective, and NBC4 Washington television evening news reporter Aimee Cho’s visit to the MBT’s rehearsal studios showed a loving and uplifting interview 15 years into the Wolfe and MBT families’ lives after the loss of Colin.  The nationally syndicated CBS Sunday Morning broadcast in November of 2014 offered an invitation into Colin’s world- unique as both a ballet dancer and a soldier, and the depth of family love and comradery from the Marines in his unit who survived the attack that killed Colin.

The venue’s auditorium and stage was smaller than the Hylton Performing Arts Center’s Merchant Hall, but it didn’t diminish the quality of the soundtrack, staging or lighting.  Composer Mark Menza’s powerful pieces resounding the serious mood with interspersed lightness of uplifting themes played by strings and chimes, and solo instruments’ poignant parts.  The music was both engaging and transformational as the score became an integral part of the performance, enriching the emotional involvement.

The choreography by Amy was well-staged, enabling the dancers to use the space to its full potential.   The beautifully muted blues, purples and greens of the backdrop’s lighting as they diffused through each color panel was vibrant.  Many scenes shared photographic images from the Wolfes’ lives — the college courtship of Amy and Mark; Colin’s childhood; the family vacation in 2005 to Normandy, France, celebrating Colin’s Osbourn High School graduation; basic training at Parris Island and his unit in Iraq’s desert landscape; and Colin’s gravesite at Arlington National Cemetery — with narration by Amy.  These brought each participant something to share, enhancing the audience’s connection to the family.

During intermission, Mark acknowledged two of the Bender JCC congregation’s members, Iris Yachim and Iris Aharonovich, who had invited MBT to perform.  They both spoke profoundly after the performance how the ballet presents both the joy of life and sadness, how the themes apply to all cultures. Mark smiled, admitting that he did indeed wear a red hoodie sweater in college and that the music composer was Amy’s first fiancé.  He then provided a thoughtful segue to the second act, stating that his son would be humbly surprised at the immense appreciation and the impact his mother’s ballet tribute has had. “Colin- Son, Marine, Hero – One Life, The Story of Many” reaches out to thousands by telling the story of one.

Exemplary 'Nutcracker' a tribute to community

What made Manassas Ballet Theatre’s production of Tchaikovsky’s 1892 “The Nutcracker” score worth attending was its uniqueness to the region: …