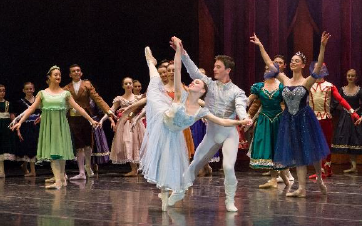 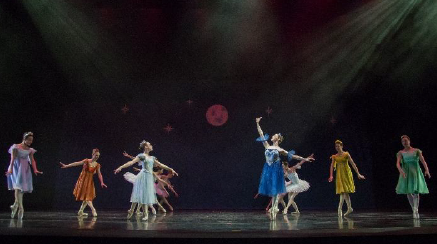 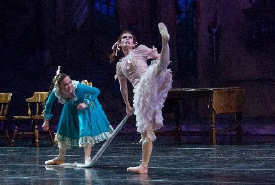 From the spontaneous applause acknowledging the professional dancers’ superior moves witnessed by keen eyes to the poignant giggling of the youngsters reacting to the equally talented dancers re-enacting the comedic stepsisters, this is a production that appeals to all. On Sunday, May 22, nearly half of the audience was children, many dressed as Cinderella. The dancers included aspiring ballerinas of the seasons’ fairy courts and young Academy novices who delightfully portray dwarves, pages, and children of the court.

The ballet dancers in the roles of the Jester, Dressmakers, Dance Master, and Gentleman of the Court- Django Allegretti, Ruslan Amrayev, Renat Osmonov, Dmitriy Vistoropskiy, Vadim Slatvitskiy, Amr Farouk, and Shady Mohamed- give strong, commanding performances; often championed by audience applause upon completing a captivating move. Django, as the Jester, adeptly intertwines with the young dancers.

As the stepmother and two stepsisters -- Kelsey Stinson, Julianne Gurgul, and Amanda Thomas -- the comic and naughty roles are thrillingly portrayed. The youngsters are entertained and the experienced audience members are wowed by the intricate choreography of their dramatic antics. As expected, the ballerinas shared post-performance how challenging their roles are.

The four seasons’ Fairies, Debbie Chen, Anastasia Mihalovna Welsh, Pamela Kubiak, Valentina Palladino, danced their solo pieces magnificently; enhanced by their respective Fairy Corps of aspiring dancers from the Manassas Ballet Academy’s ranks. The lighting perfectly spotlighted each season’s colors. One of the Winter Corps shared that she has been interested in ballet and began dancing at 2 years old- she’s now a rising freshman.

Prior to the Hylton performances, Christina Brooks shared the preparation of the costumes with Q&As in the Buchanan Gallery. They gave insight into the creative direction and also clues to colors, lighting, and the dancers’ specialties. After the Sunday matinee final performance, Vadim Slatvitskiy shared that his choreography is original and that he enjoys sharing his craft and witnessing its creation.

The professional dancers are gifted artists- they combine their dancing skills with dramatic flair and provide excellent role models for aspiring dancers, as evidenced by their interaction with the bright-eyed youngsters in the lobby seeking a photo with them and an autograph following each performance. After exhausting efforts for their performances, they generously take personal time to meet and greet each one.

The Manassas Ballet Theatre offers season memberships ensuring one’s perfect seat for each of the four performances in the 2016-2017 season. Check out their website for more information: www.manassasballet.org . This reviewer did exactly this several years ago, enjoying every minute and learning much about the wonders of the ballet!

Susan Bardenhagen is a classroom teacher who has promoted STEAM-infused education through her workshops with the VA Association of Science Teachers and the Battlefields of Northern VA Council of Teachers of Mathematics. She is the Vice-Chair of Programs for the PWC Arts Council and plays violin in the Manassas Symphony Orchestra and Old Bridge Chamber Orchestra. Susan has been reviewing an eclectic array of performances for local and regional media sources since 1996. Many of her articles are posted on bands' websites from InsideNoVa.com.

Justin Bieber admits to being 'reckless' in his previous relationship