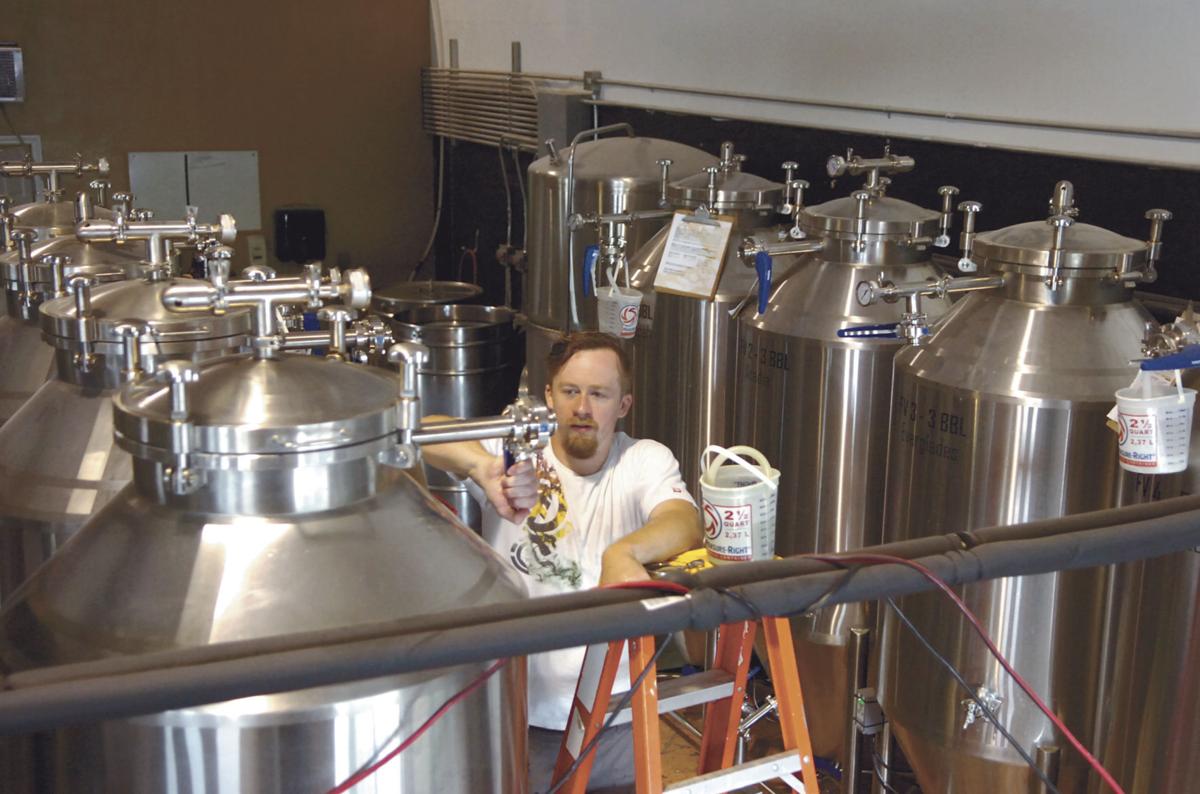 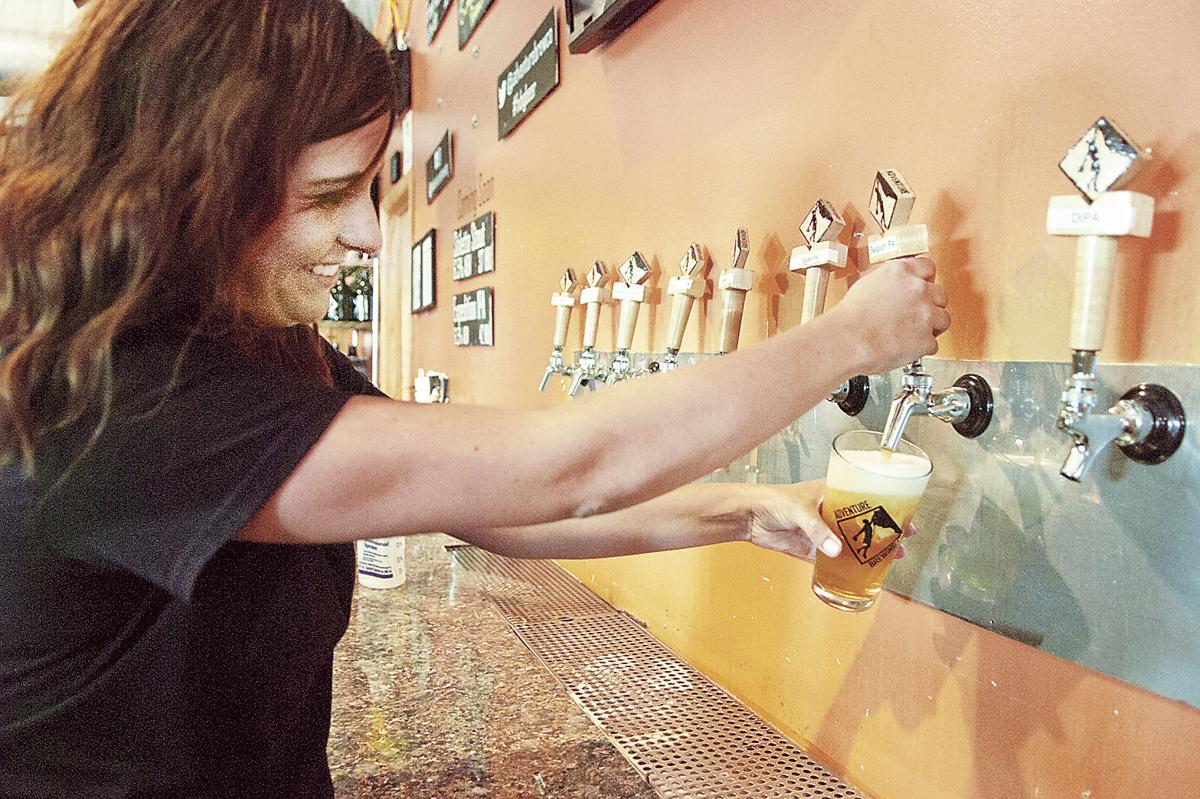 Adventure Brewing Company bar manager Keidi Reed draws a glass of the brewery's Session IPA at the mid-county location on Perchwood Drive. The brewery opened in May 2015 and is the first one in Stafford County since pre-Revolutionary War days. For more about the brewing business, see pages 2 and 3. Aleks Dolzenko/InsideNoVa.com

Adventure Brewing Company bar manager Keidi Reed draws a glass of the brewery's Session IPA at the mid-county location on Perchwood Drive. The brewery opened in May 2015 and is the first one in Stafford County since pre-Revolutionary War days. For more about the brewing business, see pages 2 and 3. Aleks Dolzenko/InsideNoVa.com

When Tim Bornholtz, Stan Johnson and John Viarella got together to start brewing their own beer about seven years ago, they didn’t have much in the way of other craft brewers to look up to in Stafford County.

At first, they took the small step of forming a club for other home-brewers to try and drum up interest in craft beer in the county.

By 2013, they decided to take matters into their own hands and start their own brewery, setting up Adventure Brewing Company just off U.S. 1 in mid-Stafford. They followed up by acquiring another location in Fredericksburg, and they even still help out their old compatriots with the Stafford Brewers Club.

“Adventure really started as three guys who fell in love with brewing beer at home, and deciding to make a living from the hobby,” said Randall Burdett, the club’s president. “And we’ve had a great partnership with them ever since...and all this comes as the industry is just exploding up here.”

In all, the county has four separate brewery locations, according to Stafford tourism manager Lisa Logan — the two Adventure locations, HighMark Brewery and the newly opened 6 Bears and a Goat Brewing Company.

“We’re seeing this sort of interest in craft beer pop up spontaneously all across the country, and we’re no exception,” Burdett said. “People want something better than Bud and Bud Light. They hear about these other options, and they try it and like it.”

Burdett hopes that his small club of about 15 members has played some small role in drumming up that interest in the county by educating people about the possibilities of craft beer. And as breweries of all shapes and sizes starting popping up in nearby counties like Fairfax, Loudoun and Prince William, Burdett sees plenty of room for that trend to continue in Stafford.

“Craft breweries aren’t limited to just one type of structure, so even though Adventure is in an industrial park, we could start to see some in different, more agricultural settings too,” Burdett said.

Everett Lovell, who has owned the Aquia Pines Camp Resort for the last few decades, tried to experiment with just that sort of unique setting for a brewery. He had been selling home-brew supplies for years, but he decided to make the leap and start Wild Run Brewing right on the property in 2014.

“We started with just three or four beers on tap, but we expanded to 12 beers on tap and two bottled over the years,” Lovell said.

However, Lovell’s new business hit a snag — he managed to run afoul of a handful of county zoning rules, and Stafford officials eventually took Lovell to court when he wouldn’t comply with their requests that he make some changes on the property. Ever since March 1, Lovell’s had to shut down his taps.

“I didn’t think they were applying the code correctly,” Lovell said. “And the unprofessionalism of some of the county staff is a major hurdle.”

A county spokeswoman didn’t respond to a request for comment on Lovell’s claims, but officials have said previously that Lovell hasn’t gotten the proper permit from the county to continue operating on the site.

“We could reopen tomorrow if we wanted, but I’m not about to defy a court order,” Lovell said. “We still have loyal customers come in every day and say, ‘When are going to re-open?’”

Lovell remains convinced that craft brewing is a “great hobby,” but he laments that other would-be brewers might not be willing to move to Stafford based on his own experience in the county.

“It’s just become a scene over the past two years because of the sheer number of breweries that have opened up,” said Ann Marie Maher, the agency’s president and CEO, noting that a half dozen of the breweries opened in the last year alone. “It’s really happening organically...You add in the space that we have, the agricultural assets that we have, the available space for businesses and we’re just perfectly slated for growth in this area.”

Supervisor Marty Nohe, R-Coles, says the county has tried to make changes around the margins to augment those natural assets. While the board has tried to address some issues specific to craft breweries in recent years, like changing county zoning regulations to let small breweries open in shopping centers, Nohe says the county’s general approach has been to cut back on the red tape that might befuddle any small business.

“We’re never going try to pay a craft brewery in Loudoun to shut down and move here,” Nohe said. “Instead, we make our regulations such that every craft brewery that’s making the right moves in terms of business decisions and marketing will be able to survive and thrive, rather than operating in an overly restrictive market.”

Maher commends Manassas for acting similarly aggressively to attract and retain breweries — of all the region’s breweries, five are within the city’s limits (including Sinistral Brewing, which is due to open this summer).

“I think it is a little more directed because of it being a city versus a county, which could attract various types of businesses,” Maher said. “But we know the agricultural aspects are of great importance. Everyone is working hard to be pro-business, pro-development, but also understanding that you need to have a plan in place as to how to have a balance between that growth and the long term sustainability.”

She made my life HELL! Stars who have dealt with difficult fans