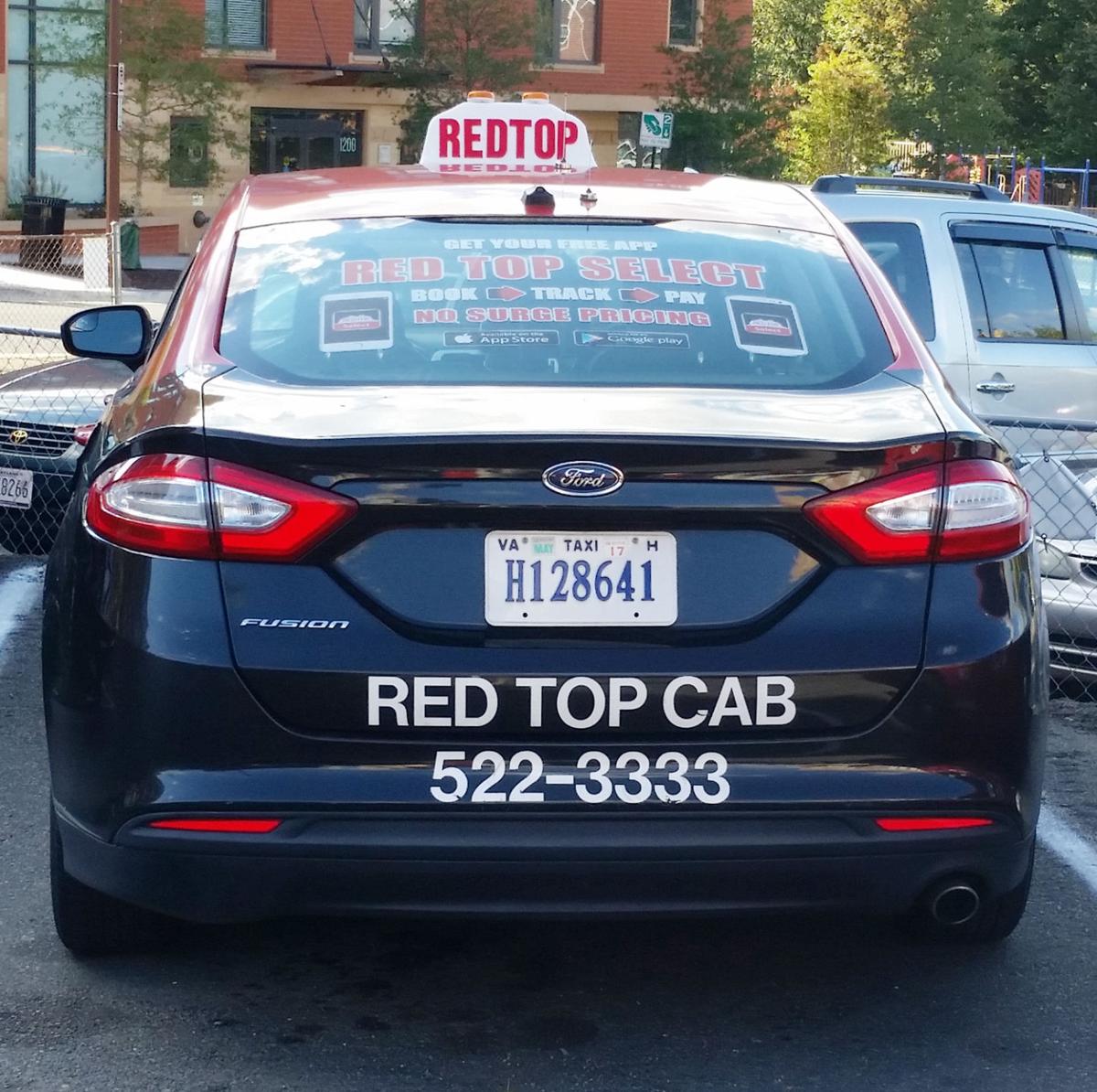 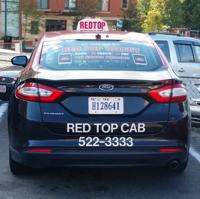 Some Red Top cabs are being outfitted with a decal that covers much of the rear window. (Red Top Cab photo)

Some Red Top cabs are being outfitted with a decal that covers much of the rear window. (Red Top Cab photo)

From the back, it sure appears new rear-window promotional decals proliferating on Red Top Cab taxis in Arlington would pose visual obstruction to the cabs’ drivers.

But after looking into the matter, county officials say they will allow the decals to remain on cabs.

“It would be easy for me to say ‘it’s dangerous’ and scrape it off, but it isn’t,” Arlington Police Detective Tom Rakowski, who serves as the county’s hack inspector, told County Board members at a recent meeting.

After receiving a complaint from the public, police put the decals to the test – taking cabs on rides in all types of weather.

“The consensus was . . . you can see around them and through them,” Rakowski said. “It’s not a safety hazard.”

The police department’s response was accepted by the County Board. “I think we should be satisfied by this report and move on,” said board chairman Mary Hynes.

(In an earlier meeting, before the police testing, Hynes had called the photos she saw “disturbing” and asked for an expedited review of whether they posed a safety hazard.)

But Lou Gatti, who brought the original complaint to the attention of county officials, was not mollified.

“There are no checks and balances in this industry, except for me,” said Gatti, a long-time driver (including for Red Top Cab) who in recent years has been critical of the industry’s practices.

Gatti’s complaint centered not only on the visual distraction of the rear-window decals, but on the fact that they represented advertising, which would require county-government approval.

“I can’t understand why no one seems to care about the facts and the laws, except me,” Gatti said. “The cab companies do what they want, [and] drivers fear for their jobs.”

Acting County Manager Mark Schwartz agreed that the back-window decals, which promote the use of mobile apps to hail cabs, do qualify as an ad. But the taxi ordinance does not specifically regulate advertising, County Attorney Stephen MacIsaac said.

“It’s a judgment call, to some extent,” he said.

Schwartz said safety was not compromised by having the decals on the back.

“We’re really sure about it,” he said.

(State law also comes into play: It allows obstructions in the back of any vehicle – for personal or commercial use – so long as the vehicle has two working side mirrors providing a rear view. “You can obstruct your entire rear window if you like,” Rakowski said.)

Charles King, a vice president of Red Top Cab, said the firm appreciates “the validation” that there is no safety hazard.

“We share the County Board’s commitment that safety be paramount, and we always put our riders’ well-being above all other considerations,” he said.

Red Top is the dominant player in the Arlington taxi market, where seven firms are authorized to operate. The taxi industry is feeling competition from firms like Uber and Lyft, and the mobile-app is one way Red Top is working to keep customers.

“We are excited about introducing new enhancements to our customers’ taxicab experience, and pleased to have the county’s support,” King said.

County Board Vice Chairman Walter Tejada said it was a good thing for cab companies, which face far more government regulation than entities like Uber, to have the chance to tout options that will allow them to compete on an even footing.

“You can sympathize with the cab industry,” he said.

But Gatti, noting that there are more than 2 million rides in taxis in Arlington each year, pressed his concern that a taxi commission is needed to provide more strenuous oversight of the industry.

“Until you get a commission, you’re never going to get the truth,” he said.

Scott McCaffrey did a good job on this article. The most important point is the creation of a Taxicab Commission. The acting County Manager is wrong when he says that : " the taxi ordinance does not specifically regulate advertising" . 100% WRONG. IT DOES.

" No approved color scheme, insignia, cruise light design, or addition of advertising or advertising devices on or within Taxicabs shall be changed without the prior written approval of the County Manager, or his designee."

These decals were advertising plain and simple, and Red Top never sought approval from anyone. This existed for about 6 months, till I brought it up. This is not even a close call. The code is crystal clear.

The pictures submitted by Red Top ( Charlie) were staged for their benefit and I will tell you how:

1. The picture of the rear taxicab decal has light reflecting off the window; a glare if you will. Very misleading.

2. Picture # 2. This interior picture is taken from between the front seat at a low angle. The head rest is also elevated. A driver looks out the rear view mirror, and this is at eye level; not a foot lower. This picture makes it look like the head rests block half the window.
Also, this was taken across the street, in a shadow of another building. This blocks out the sun, and makes everything look different. As we all know, light comes in all the car windows, and this makes the decals hard to look through.

I have better pictures and I will send them to you. 3029x@comcast.net .

Look for yourselves and tell me how safe this is.