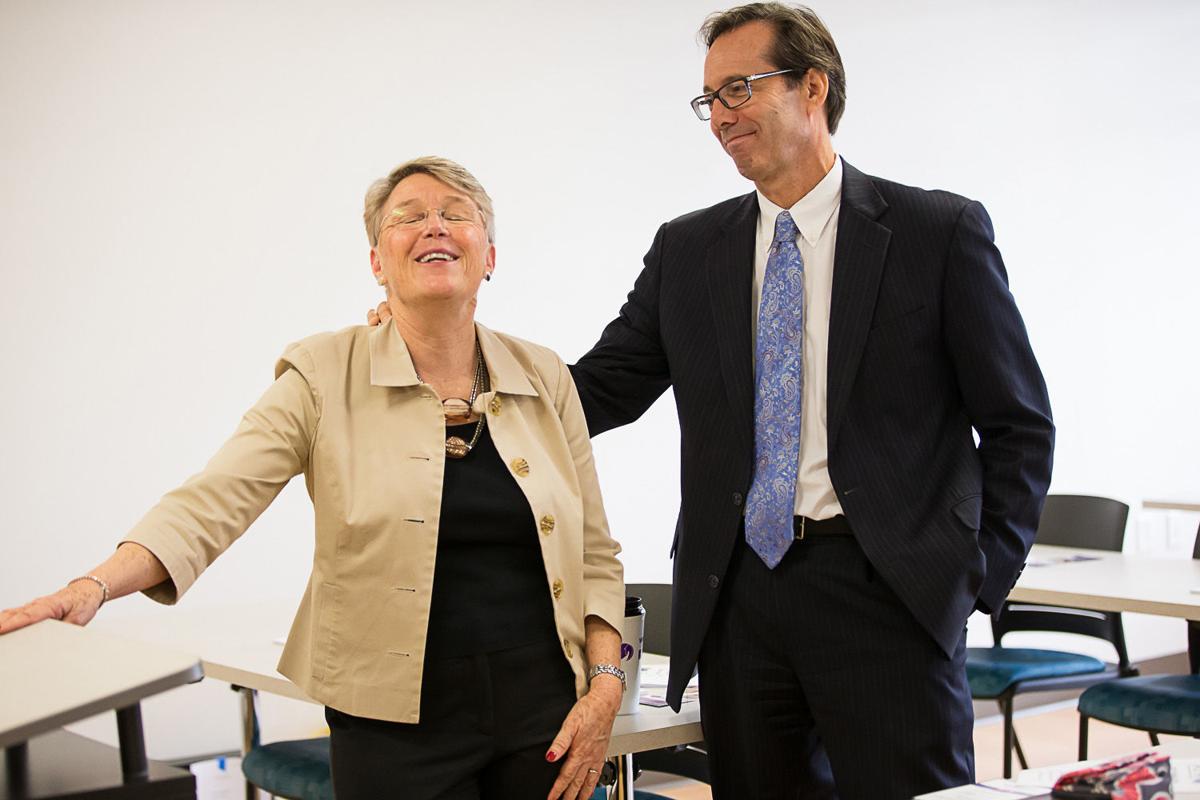 Kathleen Sibert, who heads the Arlington Street People's Assistance Network (A-SPAN), appears to be heaving a sigh of relief as she takes a group through the soon-to-open Arlington County homeless-services center in preparation for its 2015 opening. Beside her is County Board Chairman Jay Fisette. (Photo by Deb Kolt) 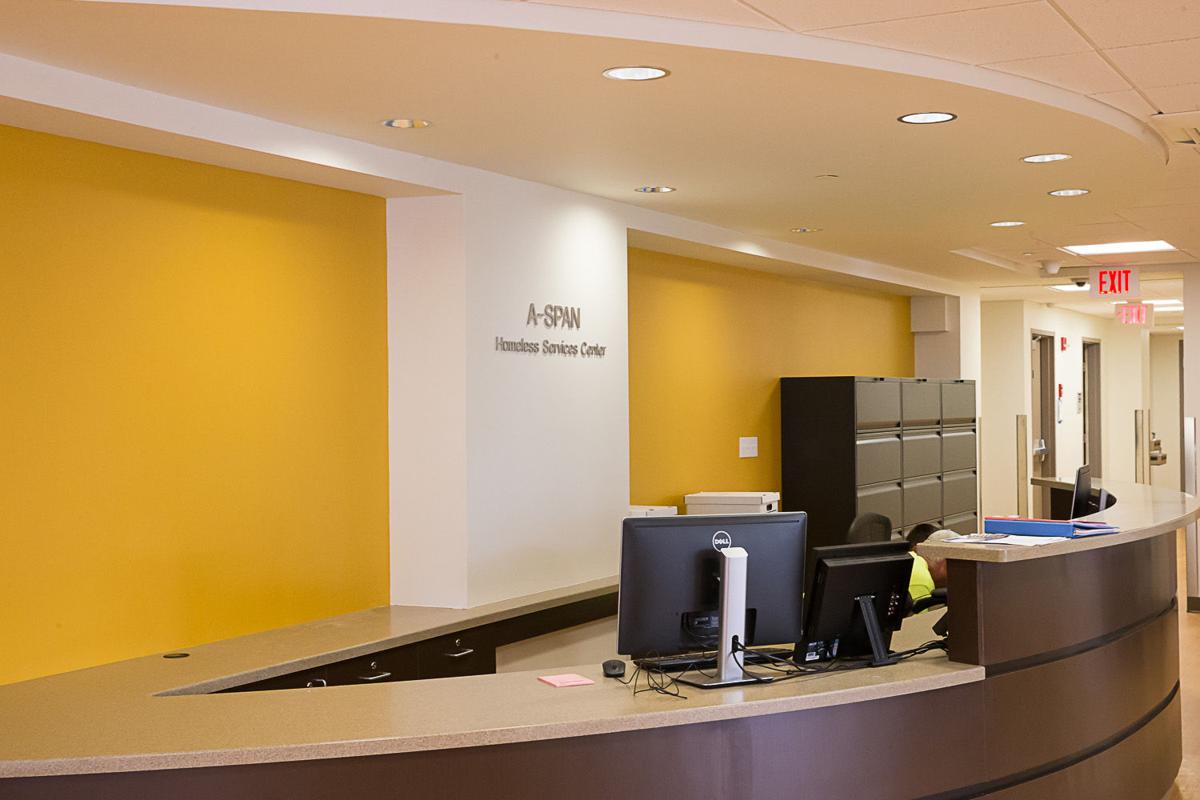 Entryway to the new Arlington homeless-services center, which will be operated by the Arlington Street People's Assistance Network (A-SPAN). (Photo by Deb Kolt) 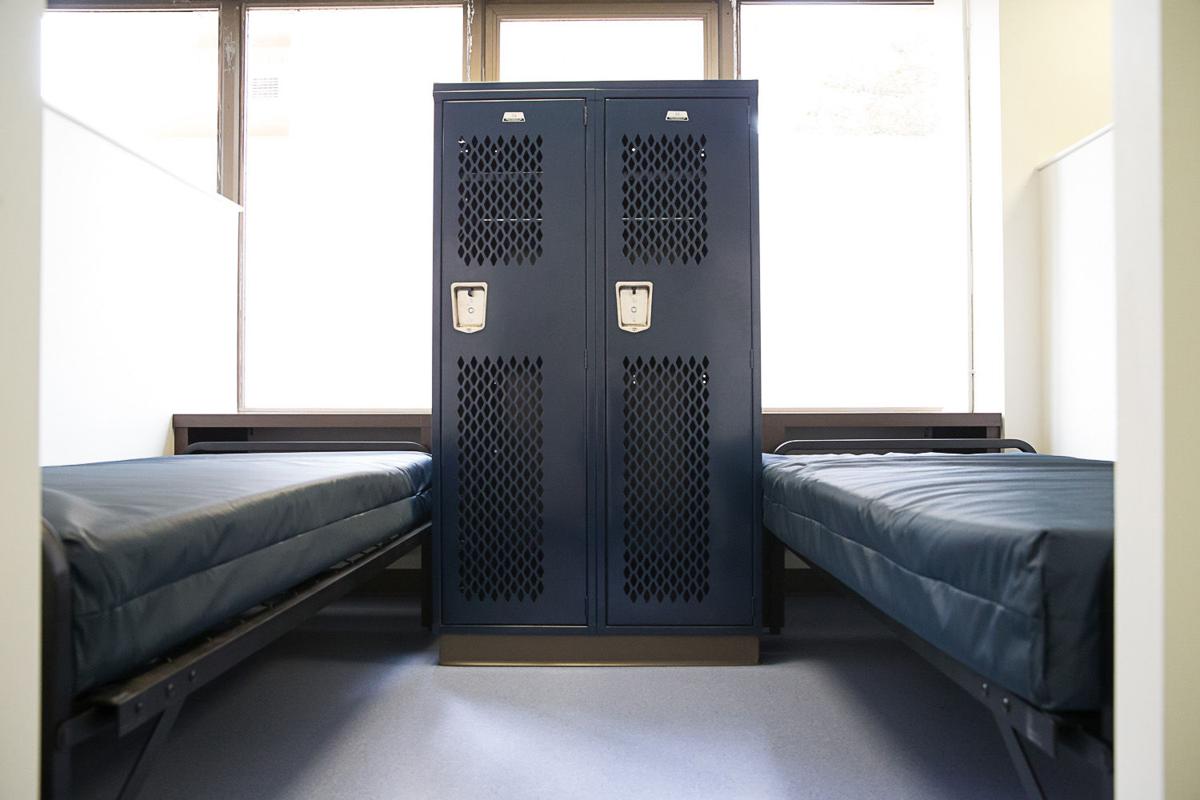 Dormitory-style bedroom facilities will be available for both men and women at the Arlington homeless-services center. (Photo by Deb Kolt)

Kathleen Sibert, who heads the Arlington Street People's Assistance Network (A-SPAN), appears to be heaving a sigh of relief as she takes a group through the soon-to-open Arlington County homeless-services center in preparation for its 2015 opening. Beside her is County Board Chairman Jay Fisette. (Photo by Deb Kolt)

Entryway to the new Arlington homeless-services center, which will be operated by the Arlington Street People's Assistance Network (A-SPAN). (Photo by Deb Kolt)

Dormitory-style bedroom facilities will be available for both men and women at the Arlington homeless-services center. (Photo by Deb Kolt)

It’s more than six months behind schedule and has weathered criticism from neighbors and fiscal watchdogs, but those rough seas appear to have calmed as the new Arlington homeless-services center preps for its public debut.

Even as vocal an early critic as Kenneth Robinson, who lives in a Courthouse-area condominium adjacent to the new facility, has proffered an olive branch to the county government and Arlington Street People’s Assistance Network (A-SPAN), which will run the year-round facility.

“A-SPAN and the county seem to have listened to a lot of community concerns and tried to reduce potential problems,” Robinson said last week, as the county government was shepherding groups through the new center.

The new center is “more than just a shelter – [it is] a powerful new resource” toward the goal of ending homelessness in Arlington, A-SPAN officials said as they prepped the space for its first occupancy.

The facility will supplant a dilapidated building located several blocks north, which previously had been used as a winter-only shelter (but was kept open this spring and summer until the transition to the year-round facility could be made). Through most of its history, the emergency winter shelter was only open at nighttime, leaving those using its facilities on their own during the day.

The new center occupies two lower floors of a seven-story, 1960s-era office building in Courthouse that the county government acquired from a Canadian real-estate investment group in early 2013. Some of the retail tenants on the ground floor have remained; the county government plans to move some of its staff into the upper floors of the building.

When the County Board approved a use permit to allow renovation of the space for use as a homeless-services center to move forward, the target date for opening was late 2014. Construction delays and other issues tangled up the timetable.

Critics of the facility have voiced concerns about security – even though the county police headquarters is right next door – and harbored fears that providing comprehensive services will make Arlington a magnet attracting the homeless from across the Washington region.

Officials say that won’t be the case. “These services are for Arlington County residents only,” said Kathleen Sibert, who heads A-SPAN.

But there is a caveat attached: When a person enters the shelter, he or she will have 96 hours (four days) to provide documentation of a connection to Arlington. If unable to do so, the individual will be linked to shelters and services in his or her home jurisdiction.

How big a problem is homelessness in Arlington? Based on a count earlier this year, the total homeless population (including those in shelters) across the county totaled 239, down from 291 a year before and a 50-percent decrease from 2013.

Those classified as “unsheltered” – mostly living on the streets – dropped from 146 in 2013 to 51 in 2014 to 39 in 2015, a decline of 73 percent in two years. It is a trend local officials attribute to aggressive efforts to find housing and provide social services for those on the street, with a particular emphasis on the chronically ill as well as military veterans.

Regionally, the total homeless population of 11,623 in 2015 was down 2.7 percent from 2014, based on an annual count conducted each January by the Metropolitan Washington Council of Governments.

Across the region, 0.22 percent of the population is counted as homeless; excluding the District of Columbia from the data, the rate is 0.09 percent. Arlington’s homeless population, based on the January 2015 count, represents 0.11 percent of the county’s overall population.

I expect close to zero problems involving the homeless after this facility opens.