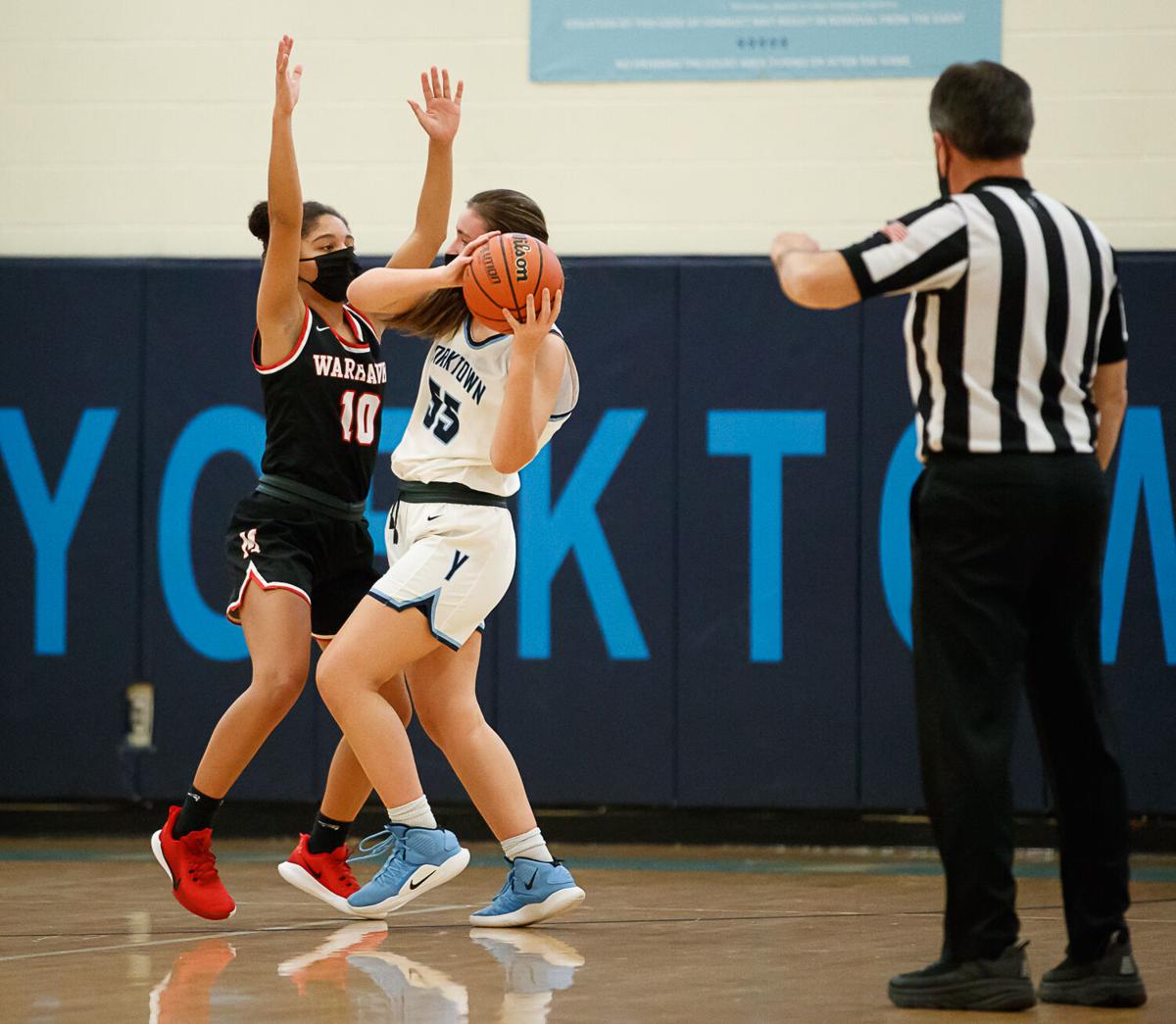 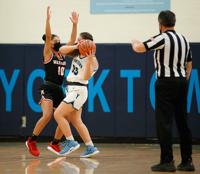 A referee watches the action during competition between the Yorktown and James Madison girls teams on Dec. 30, 2020. (Photo by Deb Kolt) 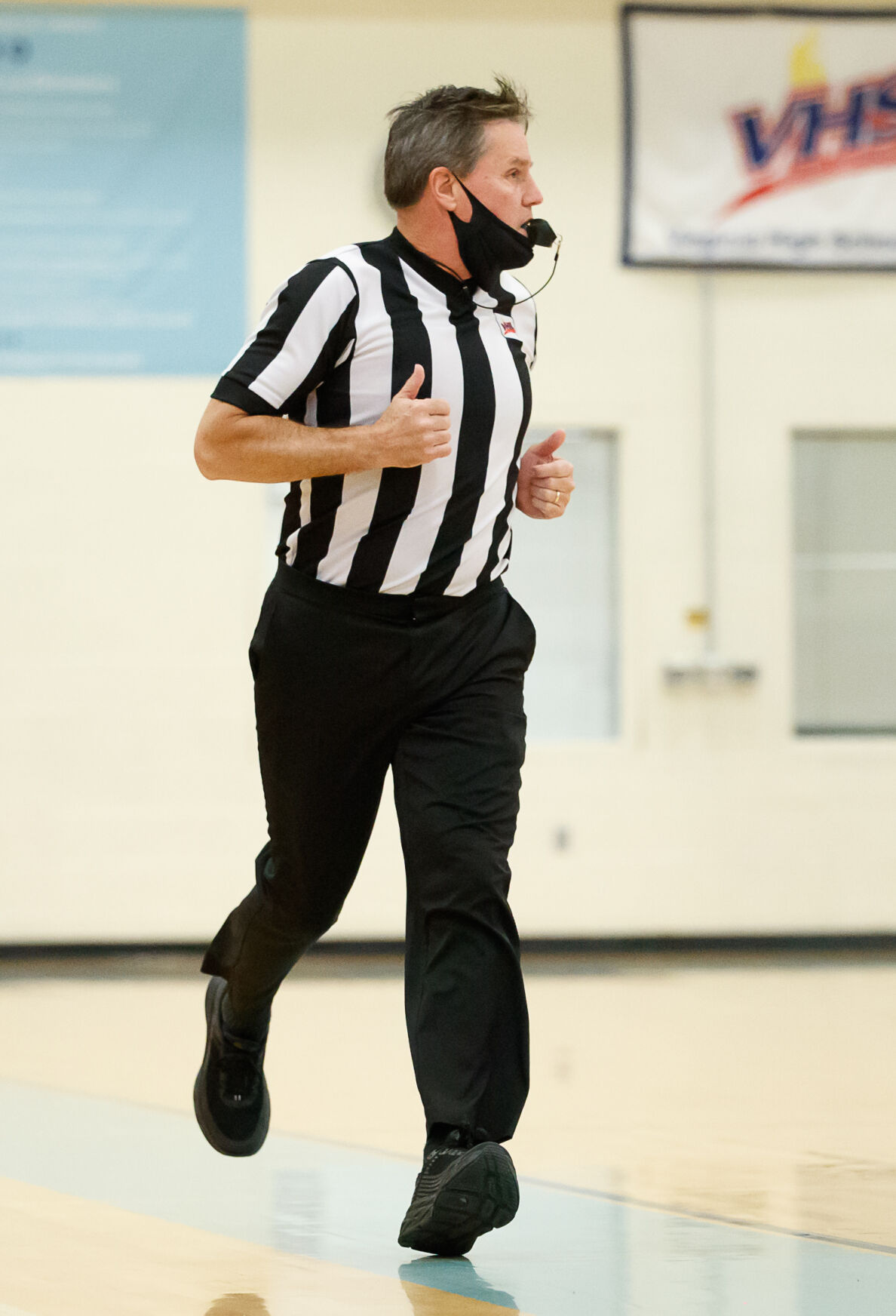 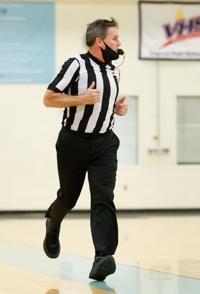 A referee watches hustles down the court during competition between the Yorktown and James Madison girls teams on Dec. 30, 2020. (Photo by Deb Kolt) 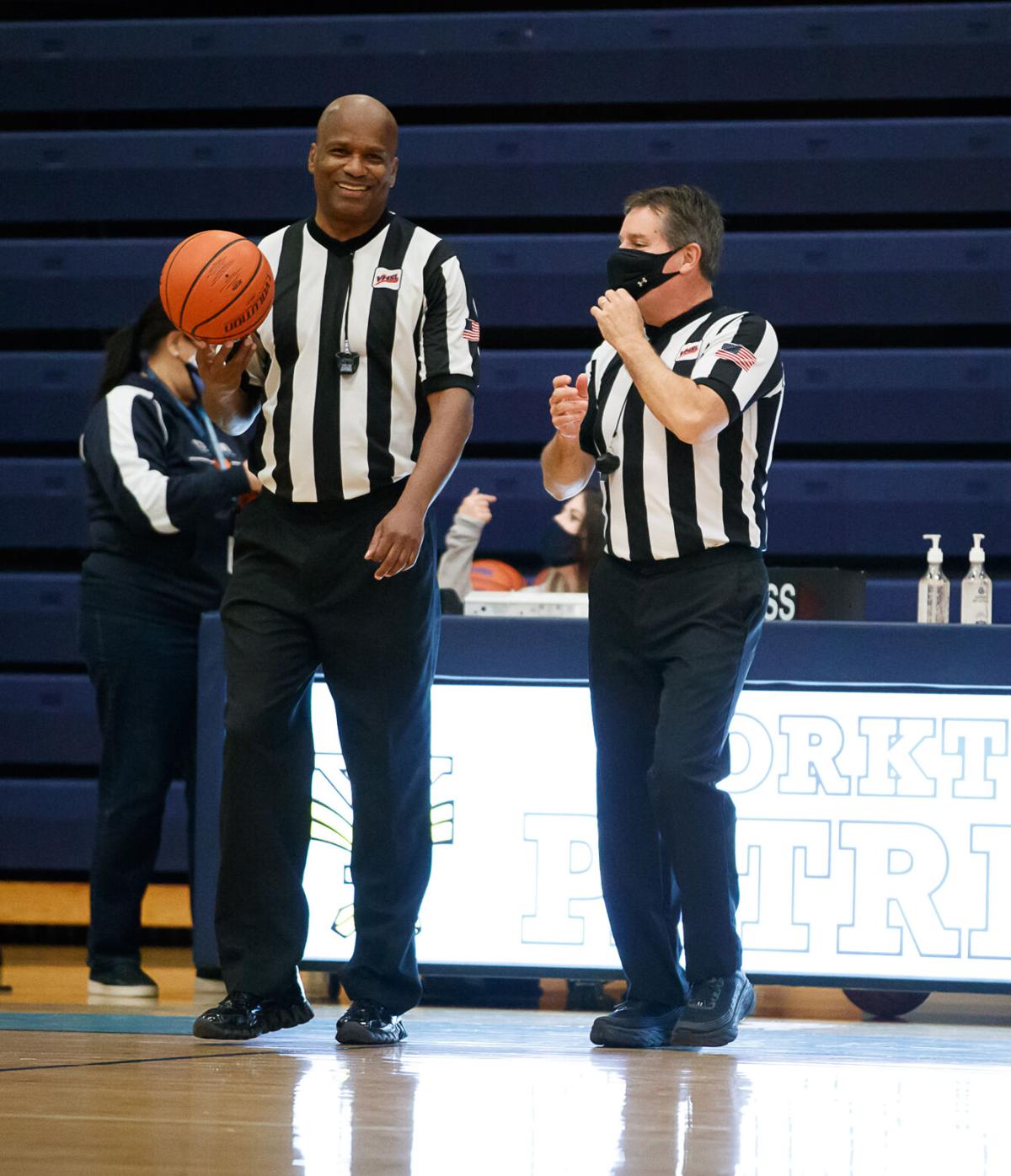 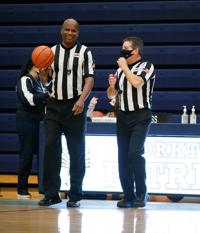 Referees confer during competition between the Yorktown and James Madison girls teams on Dec. 30, 2020. (Photo by Deb Kolt)

A referee watches the action during competition between the Yorktown and James Madison girls teams on Dec. 30, 2020. (Photo by Deb Kolt)

A referee watches hustles down the court during competition between the Yorktown and James Madison girls teams on Dec. 30, 2020. (Photo by Deb Kolt)

Referees confer during competition between the Yorktown and James Madison girls teams on Dec. 30, 2020. (Photo by Deb Kolt)

Players, coaches and school administrators aren’t alone in making adjustments to hold a high-school basketball season in Fairfax and Arlington counties, which began Dec. 21 with many restrictions and protocols to follow because of the COVID-19 pandemic.

Game officials and referees from the Cardinal Basketball Officials Association, who work those many contests, have made accommodations to be available, as well.

Including games in Loudoun County and a few in Prince William County, in addition to the inner suburbs, association officials work as many 80 games each night, including freshmen, junior varsity and varsity contests.

The task has become more of a challenge because only about 60 percent of the normal total of 373 game officials are available, according to the association’s scholastic commissioner Doug DeVault. A number have opted out of working games during the pandemic season, condensed to a seven-week campaign. The average age of an association official is 50.

One of the biggest changes is that all games, including varsity contests, have only two on-court referees instead of three in normal seasons because of the shortage of referees.

“Maybe we can have three-person crews during some playoff rounds, but not now,” DeVault said. “We just don’t have enough. It’s tough and has been a challenge. Every day there is something new or different.”

DeVault said the association has worked with school and jurisdiction athletic directors on creative scheduling to have referees available for each contest.

“There is even a tighter schedule than normal, with more games in a shorter span,” said Adam Brick, the association’s board president. “We are figuring out ways to get this done in a safe way, and keep all others involved safe as well. It’s a balancing act.”

Referees don’t wear masks during play but do at all other times, like for timeouts, between quarters and in any situation when they are talking in close proximity to players and coaches, or those at the scorer’s table.

The referees have changed their positioning a bit during contests when free throws are being taken, and are instructed to stay away from a gathering of players in loose-ball situations, or if any type of altercation occurs. The Virginia High School League has disallowed jump balls during games. DeVault said that helps with separation of officials.

“They are told to keep their distance from everybody,” DeVault said.

Like players, coaches and anyone working games, referees receive health screening before contests, including having their temperatures taken.

Brick is a basketball referee himself, having worked games for some 30 years. He explained the association held recent “virtual” training sessions, including COVID updates on protocols.

“We used lessons learned from soccer, baseball and softball referees in this situation. We learned from the Virginia High School League and government officials to come up with our own protocols,” Brick said. “Basically, our advice is to use extra common sense and be flexible.”

The Cardinal Basketball Officials Association was formed in time for the 1982-83 high-school season, when the old Capital (which refereed only girls games) and Commonwealth (boys) associations merged into a co-ed group. It is one of the biggest such organizations in Virginia.

Virginia's daily average of new COVID-19 cases hit a record high for the third straight day Monday, as hospitalizations for treatment of the v…

Christoph Waltz and Willem Dafoe cast in Dead For a Dollar