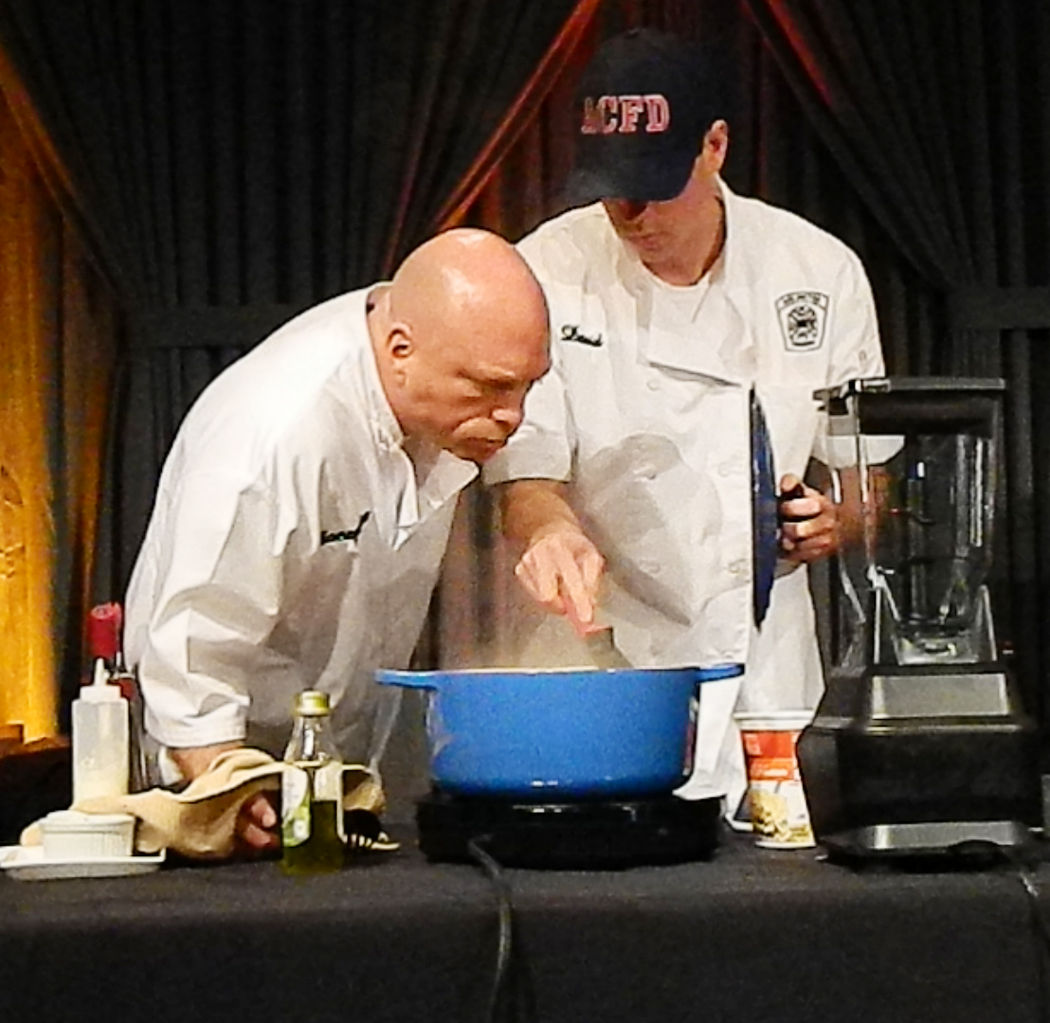 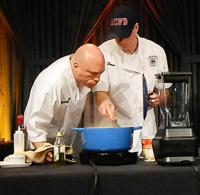 Capt. Bo Bennett and Firefighter David Harrison – "Team Blaze & Glaze" – are hard at work during the third annual Chiefs vs. Chefs competition, held in 2014 and sponsored by the Arlington Food Assistance Center. 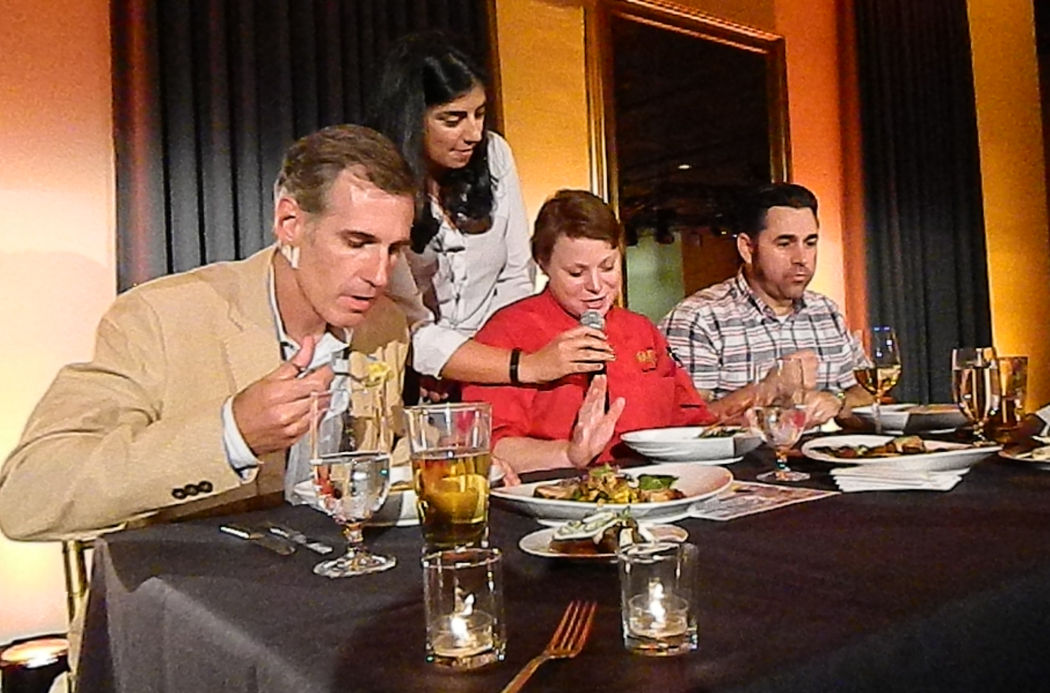 Capt. Bo Bennett and Firefighter David Harrison – "Team Blaze & Glaze" – are hard at work during the third annual Chiefs vs. Chefs competition, held in 2014 and sponsored by the Arlington Food Assistance Center.

It came down to the final vote in the final round, and when it was all over, culinary professionals edged out firehouse cooks in the third annual “Chiefs vs. Chefs” fundraiser for the Arlington Food Assistance Center.

Held Oct. 1 at Clarendon Ballroom, the event attracted a crowd of 300 and brought out cordial, though spirited, competition during 25-minute sprints that took teams from raw ingredients to restaurant-quality finished courses under the glare of TV lights and onlookers.

Rather than buckle under to the pressure, competitors rose to the challenge.

“I’m seeing some amazing things up here,” said Grace Shea of Lebanese Taverna, who provided running commentary during the three rounds of competition.

Judges David Guas of Bayou Bakery, Shannon Overmiller of The Majestic and Greg Hamilton of Arlington Magazine had both the most challenging – yet most palate-pleasing – job of the night: Trying to pick winners as the firehouse chefs squared off against the professionals.

High-caliber results from established chefs were expected, but “what’s amazing is the quality of the food at the firehouses,” said Hamilton, back for another year of judging.

Both Guas and Overmiller were competitors last year, and said they were enjoying the slightly less frenetic role of judge.

“It’s great to be on this side,” Overmiller said. Her advice to the competitors: “Stay cool and have fun.”

The first round (appetizers) went to “The Rat Pack” team of Arlington Fire Lt. Richard Slusher and Firefighter Anthony Westfall in a 2-1 decision over Chef Tim Ma of Water & Wall. The second round (soup or salad) was taken by Chefs Tracy O’Grady and Kate Jansen over “Team Blaze & Glaze” of Fire Capt. Bosephus Bennett and Firefighter David Harrison.

After tasting the offerings and then comparing notes, it was clear the judges were at something of an impasse in coming up with a third-round winner.

Overmiller sided with the chefs, saying the Conde/Ibarra team did almost everything right, but their final product lacked enough seasoning.

Hamilton went with the chiefs, saying both finished products were good, but the firehouse version was slightly better.

It all came down to Guas, who can be seen on “American Grilled” on The Travel Channel. He went with the chefs, giving Morris and Smith the victory and giving them the coveted “Golden Eggplant” award that all winners receive.

That last-minute defeat was a heartbreaker for Fire Chief James Schwartz and a large number of fire personnel on hand to cheer on their colleagues.

How does this competition differ from many others like it? There’s one unique challenge: The teams are only allowed to use items that are available through the Arlington Food Assistance Center’s pantries. It’s a collection of basic staples from which they have to get creative.

“Who would have thought putting spinach with chili – and a hot dog?” marveled Shea at one point. But the combination worked.

Among those paying close attention – very close attention – were Amir Moustafa, a sixth-grader at H-B Woodlawn Secondary Program, and his sister Yasmeen, a seventh-grader at Thomas Jefferson Middle School. By the end of the evening, they were almost a part of the program – ringing the fireball to signal the start and end of competition and even getting samples from the judges. Amir Moustafa, who is interested in becoming a chef, walked away with Chef Overmiller’s business card to prepare for that day.

“What a great way to pass on the legacy of cooking,” Shea said.

(Asked their favorite foods and then given a little time to think it over and revise and extend their remarks, Amir went with his father’s Mexican lasagna and Yasmeen with her dad’s chili. If we’ve mixed up those favorites among the children, it was getting late and a reporter’s notepad bears stains from having transported some of the chef’s offerings before they were gobbled down.)

Funds raised through the event will support the ongoing mission of the Arlington Food Assistance Center, which saw need in the community spike during the recession. It still has not declined to pre-recession levels, with more than 2,000 Arlington families receiving pantry services each week.

Charles Meng, the organization’s executive director, said it seemed natural to put together a competition featuring those who get culinarily creative in Arlington’s fire stations.

“They’re a great bunch of people, [and] firefighters know how to cook,” he said.

Firefighter Westfall told the crow that there was no single chef among the personnel at any fire station.

“We take turns,” he said, with their ingredients constisting largely of “what’s on sale.”

“The whole night is fun, lots of fun,” Guas said.

Emily Blunt: Why I turned down Black Widow role

Janelle Monae in talks for Knives Out sequel

Pink: It's unfair how women in music are pitted against each other