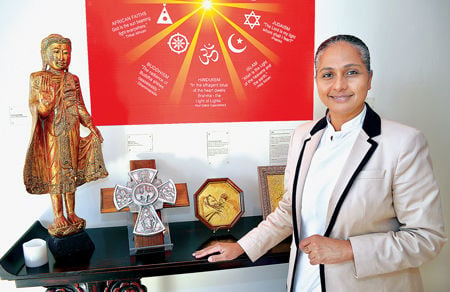 Sister Jenna, director of the Meditation Museum II in Tysons Corner, poses by some of the artifacts and posters designed to induce harmony and constructive thoughts. (Photo by Brian Trompeter) 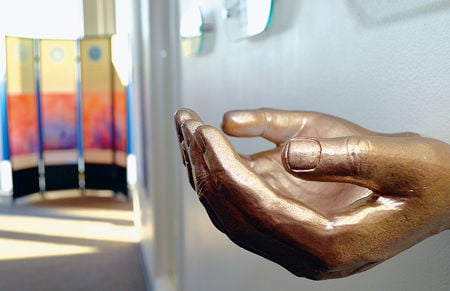 A pair of oversized hands extending from a wall at the Meditation Museum II in Tysons Corner highlights the sense of touch. (Photo by Brian Trompeter)

Sister Jenna, director of the Meditation Museum II in Tysons Corner, poses by some of the artifacts and posters designed to induce harmony and constructive thoughts. (Photo by Brian Trompeter)

A pair of oversized hands extending from a wall at the Meditation Museum II in Tysons Corner highlights the sense of touch. (Photo by Brian Trompeter)

Tysons Corner probably is the last place where frazzled commuters would seek peace of mind, but the newly opened Meditation Museum II provides an environment for reconnecting with one’s better self.

“We want the space to offer more openness, inner strength, peace and happiness, but also encourage people to maintain determination and never settle for less in life,” said founder and director Sister Jenna.

Staffed by her and a group of volunteers, the museum is affiliated with the non-profit organization Brahma Kumaris, which has more than 9,000 branches in 120 countries.

The first Meditation Museum first opened six years ago in Silver Spring,  with Sister Jenna as its founder and director. It holds about 200 free events per year and has served about 30,000 people.

The organization also served Virginia for a decade out of a location along Georgetown Pike in McLean, then opened the second museum Oct. 14 in Tysons.

The Meditation Museum II is located upstairs in a small strip mall at 1984 Chain Bridge Road, Suite 201. Climbing the stairway, visitors are enveloped in a fragrant scent resembling that of a botanical garden. It’s a happy coincidence, as the smell emanates from a florist shop next door.

Visitors entering the museum must take off their shoes, which keeps the floor clean and symbolically represents leaving one’s burdens behind, Sister Jenna said. Attendees also may be followed around by an inquisitive, white Havenese dog named Happy.

The museum’s first section has explanatory charts and symbolic statuary. A massive pot of red poinsettias anchors a window facing west, which has been given a soothing blue tint at the bottom. Soft, calming music plays in the background.

Turning left, visitors enter the main room, an open space for classes and lectures. Mini-sculptures protruding from the wall depict eyes, ears, a nose, a mouth and a pair of hands, which represent the five senses and the need to filter feedback from them positively.

The museum focuses on purging ALGAE – anger, lust, greed, attachment and ego – from people’s minds, Sister Jenna said. She drew a distinction between soul awareness, in which one’s mind is focused on positive energy and making contributions to the world, and “body awareness,” which is more selfish and hung up with conflicts from the past.

“The goal is not to feel hopeless, but to keep thriving,” Sister Jenna said. “If we don’t give anything to our lives, why should we expect anything in return?”

A poster on one wall points out the cyclical nature of time. A nearby placard states, “Nothing in nature is a straight line. Why should human nature be an exception?”

Another wall hanging explains the concept of Man Mana Bhav, which is Sanskit for “Be with me in your mind.”

Adjacent to the main room are a classroom and a quiet room for meditation. T

The museum offers a smartphone app called “Pause for Peace,” which allows users to access the radio program, meditation advice and Sister Jenna’s articles in the Huffington Post. The museum’s Raja yoga meditation courses are free, but donations are welcome.

Julio Mendoza, who has volunteered at the museum for three years, formerly was in the corporate world and now runs his own business.

“I had the need of something beyond what I was doing,” said Mendoza, a native of Venezuela. “Being Catholic, it complements my spiritual beliefs.”

“She has a total heart of service and compassion,” Kogod said. “She’s always thinking about how to bring people together in an inspirational kind of way, to uplift souls.”

The Meditation Museum II is open Mondays through Fridays from noon to 2 p.m. and 6 to 8 p.m.; its hours may be extended starting in January.

Mike Flanagan: Revival will be my darkest Stephen King adaptation yet

The Trial of the Chicago 7 to be released on Netflix