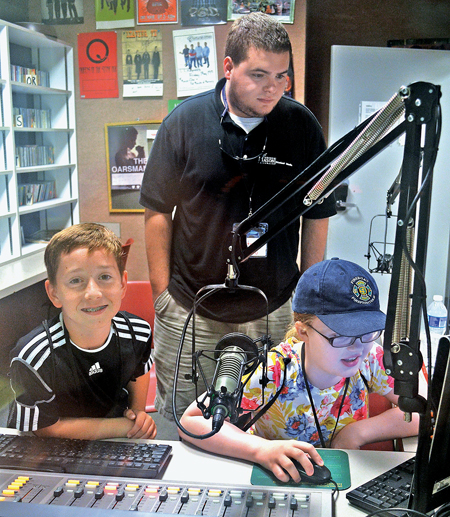 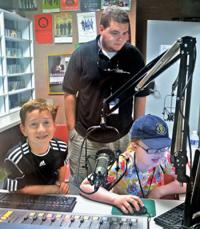 Matthew Placzek, 10, of Sterling and Deirdre Jane Prigge, 11, of Leesburg review playlists at the console at WGMU on July 22 under the supervision of general manager Storm Paglia, 21. The students were among six participating in one of two weeklong summer radio camps at George Mason University. (Photo by Brian Trompeter) 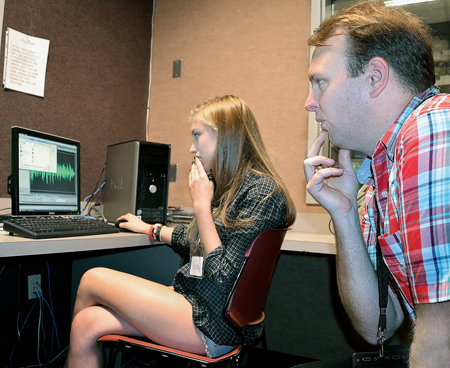 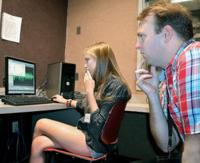 Quinn Healy, 16, of Leesburg learns how to produce radio programs July 22 under the tutelage of George Mason University senior Reid May, 34. (Photo by Brian Trompeter)

Matthew Placzek, 10, of Sterling and Deirdre Jane Prigge, 11, of Leesburg review playlists at the console at WGMU on July 22 under the supervision of general manager Storm Paglia, 21. The students were among six participating in one of two weeklong summer radio camps at George Mason University. (Photo by Brian Trompeter)

Quinn Healy, 16, of Leesburg learns how to produce radio programs July 22 under the tutelage of George Mason University senior Reid May, 34. (Photo by Brian Trompeter)

Matthew Placzek of Sterling was not intimidated July 22 when the music stopped at George Mason University’s radio station, WGMU.

The 10-year-old rising sixth-grader at Stone Hill Middle School in Ashburn spoke clearly into the live microphone and read the script he’d prepared at the university’s annual Summer Radio Camp.

“You’re listening to WGMU, heard online at www.wgmuradio.com,” Placzek said right on cue. “I’m Matthew and you just heard ‘I Love It,’ by Icona Pop, featuring Charli XCX. More music on the way, so stay tuned for B.o.B., featuring Bruno Mars, and R.E.M., which are coming soon on WGMU.”

Placzek was among six students who participated in the camp’s first session, held July 21 through 25. Another six youths would undergo the same hands-on course the following week.

WGMU faculty adviser Rodger Smith has led the camp ever since he founded it in 1996 at the suggestion of Don Boileau, former chairman of GMU’s Department of Communication.

“We teach them on-air skills, how to write commercials, and to write and produce news items,” Smith said.

Smith taught the students how to interview subjects using a digital voice recorder and then combine the audio with their own voices.

“You have to write for the ear,” he said. “You have to be a little more descriptive. You have to be short and concise. The average news story, counting sound bites, might run 30 or 40 seconds.”

This summer’s camp was the first for instructor Reid May, a 34-year-old GMU senior who taught participants the intricacies of radio production, such as obtaining quality sound and integrating it into commercials.

“A lot of it is listening and paying attention to detail,” he said.

Participants ranged from 12 to 17 years old, but camp leaders paired students with others close to their own ages.

Classes ran from 9 a.m. to 2 p.m., with a lunch break in the middle. During the first week, participants visited news station WTOP; students in the second camp were due to visit ESPN 980, where GMU alumnus Nick Ashooh works.

Camp members selected playlists of songs and instructor Storm Paglia, who taught the live-broadcasting segments, was surprised they liked so much older music and classic rock.

Students also assembled material for commercials and did live shows. Deirdre Jane Prigge, 11, of Leesburg, who is a rising seventh-grader at Belmont Ridge Middle School, said she was accustomed to performing on her school’s news channel.

But Catlinh Nguyen, 14, of Chantilly said speaking live on the air was a bit nerve-racking.

“It was kind of scary,” said Nguyen, a rising freshman at Thomas Jefferson High School for Science & Technology. “It was live, so you couldn’t mess up.”

The students practiced making smooth transitions between program elements in order to comply with Rule No. 1: Avoid dead air time.

There were other rules, of course. A note on the studio wall warned against using profanity, endangering listeners, holding complicated contests, disrespecting people’s religions and making racist remarks.

The notice also urged disk jockeys to have and be willing to use a delay button (preferably 20 seconds), show courtesy to advertisers and strive to make a difference in the world.

“Complacency on the inside loses listeners on the outside,” one item read. “Work on your art.”

The soundproofed studios – one the main broadcasting center, the other largely for behind-the-scenes technical work – were surprisingly tidy and had walls lined with grayish-brown carpeting. The primary broadcasting booth had shelves neatly filled with compact disks and walls covered by band posters, some of them autographed.

A small camera in front of the console streamed video of the proceedings live to the Internet. A black filter the size of a hockey puck, dubbed a “pop screen,” was positioned in front of the microphone to iron out the discordant lip-smacking noise that occurs when speakers use the letter “P.”

Camp leaders planned to save all of the youngsters’ on-air work, organize it and give the compilations to their parents, said Paglia, a 21-year-old GMU senior majoring in government.

Smith said he hoped the students would benefit from their excursion into broadcasting.

“These are a good, little group of kids who are willing to learn something new,” Smith said. “I think they enjoy learning a new skill, being with kids their age and having some fun.”