"Arlington's Got Talent" contestants and members of the Leadership Arlington Young Professionals group who organized pose for a group photo after the event, held at Clarendon Ballroom. (Photo by Colin Spitzer) 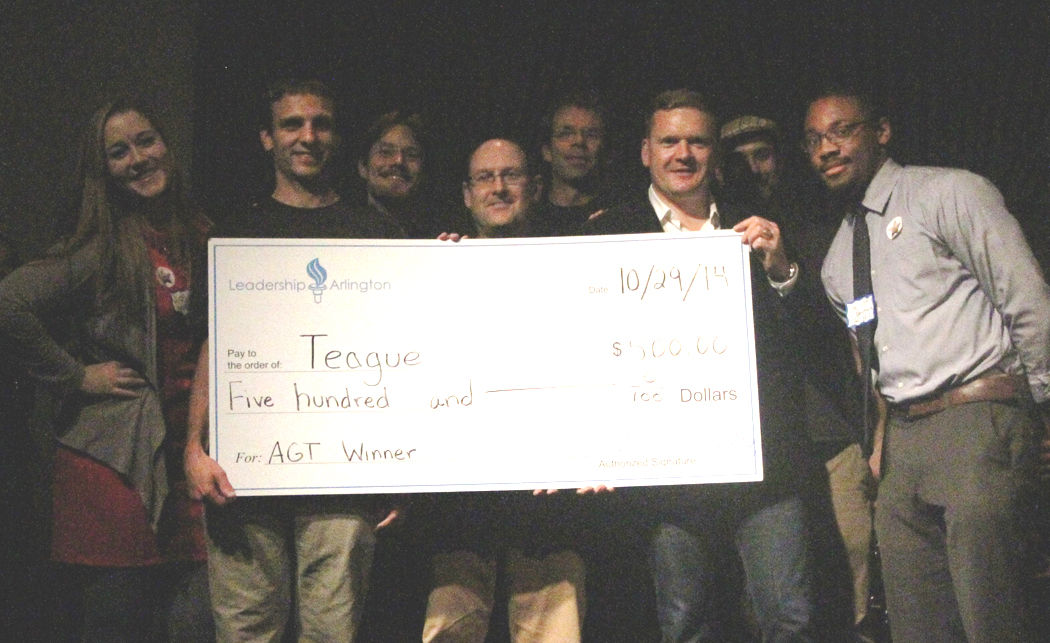 Teague collects the first-place award at the 2014 "Arlington's Got Talent" competition. (Photo by Colin Spitzer)

"Arlington's Got Talent" contestants and members of the Leadership Arlington Young Professionals group who organized pose for a group photo after the event, held at Clarendon Ballroom. (Photo by Colin Spitzer)

Teague collects the first-place award at the 2014 "Arlington's Got Talent" competition. (Photo by Colin Spitzer)

Take one part Sinatra, throw in a dash of Elton John, a pinch of Dean Martin and a smidgen of Willie Nelson, and what have you got?

In the case of the third annual “Arlington’s Got Talent” competition, you’ve got a winner.

“Teague” – he goes just by his first name, like Cher, although his full name is Teague de la Plaine – and his band took home the crown during a celebration held Oct. 29 at Clarendon Ballroom.

A crowd of several hundred was on hand to view what likely was the most diverse line-up of acts in the competition’s history.

Proceedings began with a Marine-turned-comedian and continued with everything from a Nepalese dancer to a high-school math teacher by day/wedding singer by night.

Selecting the competitors from among several dozen audition tapes, and organizing the night’s proceedings, was the responsibility of a committee led by Alexa Fox of Segue Technologies and Joe Onyebuchi of Volunteers of America Chesapeake, members of the Leadership Arlington young-professionals initiative.

Despite the hectic pace of organizing the event, “my classmates and I were really excited to give back,” Onyebuchi said.

Over the past five years, the young-professionals effort has helped train more than 160 members. It has been “an amazing experience for me,” Onyebuchi said.

A line-up of eight acts competed for the crown and cash prizes. Teague narrowly beat out soulful singer (and the aforementioned math teacher) Travis Tucker, who also was runner-up a year ago. Second-runner-up went to Euphonism, a collaboration of seven vocalists taking on well-known songs and original compositions.

Winners were determined by fundraising efforts coupled with the votes of four judges, each of whom was back for another year: Marymount University president Matthew Shank; community leader and treasurer’s office staffer Susan Anderson; Arlington Magazine publisher Greg Hamilton; and local architect and civic leader Michael Foster.

“A terrific evening,” Hamilton said of the competition and camaraderie.