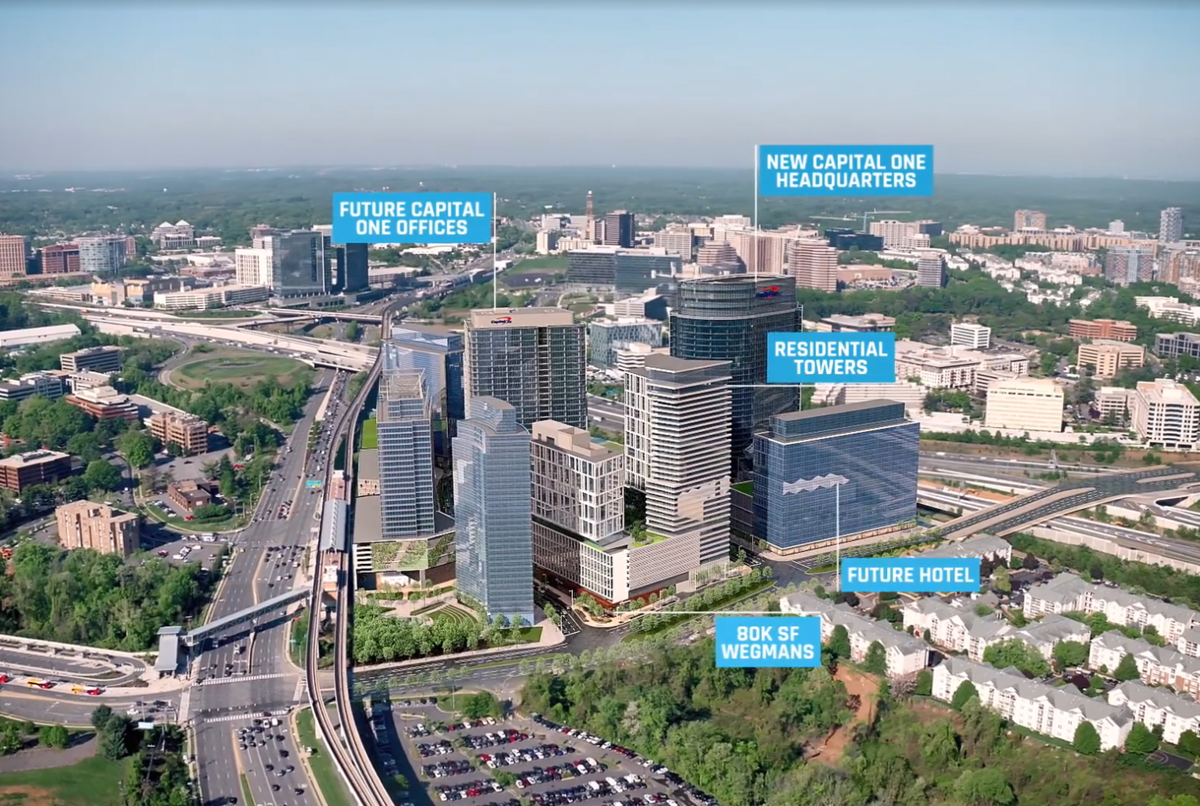 After years of planning and construction, Capital One is nearing completion of the first phase of its headquarters expansion in McLean, which literally towers over the Beltway. 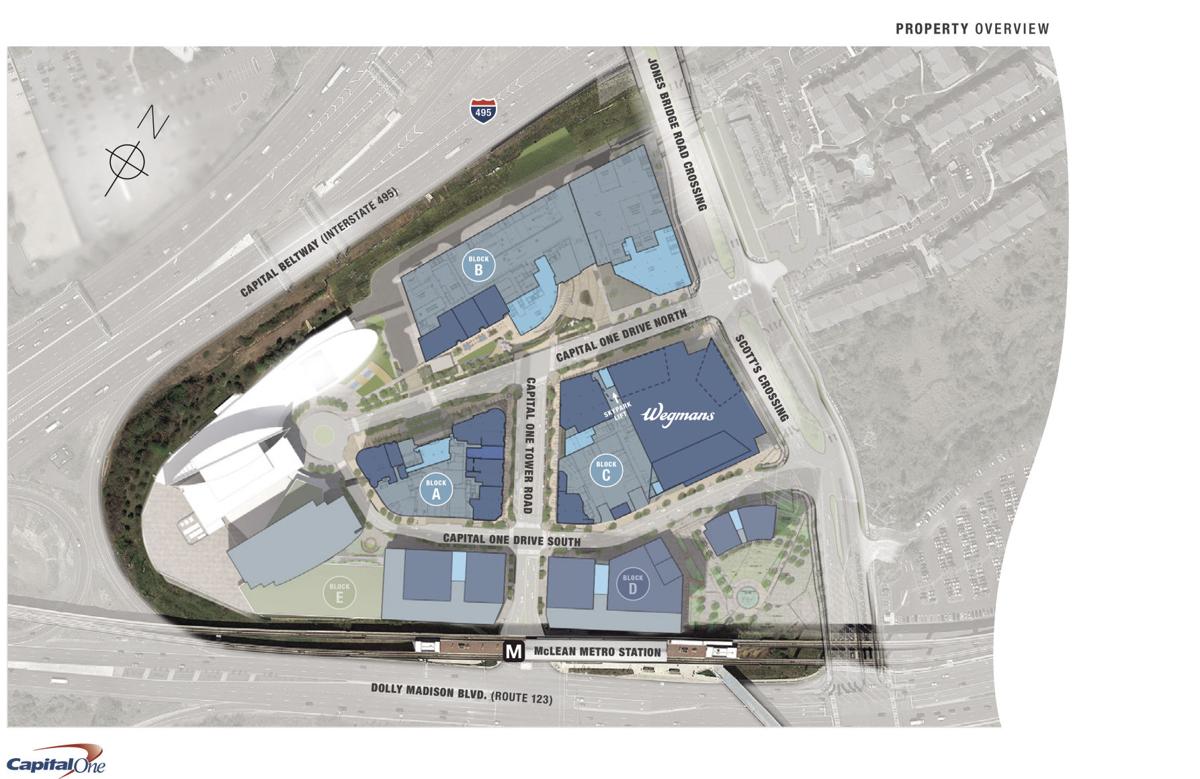 After years of planning and construction, Capital One is nearing completion of the first phase of its headquarters expansion in McLean, which literally towers over the Beltway.

Although Capital One has had a strong presence in Fairfax County for more than a decade and a half, the completion of its headquarters expansion in 2023 will have a profound impact on the Tysons area.

Fortunately, the company has largely had the support and encouragement of Fairfax County officials along the way and considers its relationship to be a “tight partnership.”

“Capital One has been a fantastic and generous corporate neighbor,” said Sharon Bulova, Chairman of the Fairfax County Board of Supervisors. “They have been a valued presence in Fairfax County for some time now and we’re really pleased and excited with their plans for their redeveloped corporate headquarters.”

Dr. Gerald Gordon, President and CEO of the Fairfax County Economic Development Authority, said the sheer size and visibility of the Capital One headquarters tower, which opens officially in December, is helping to put Fairfax County on the map for other financial services companies.

Capital One proudly stated that it “didn’t seek or accept any incentives for this project.” In fact, it did quite the opposite; Capital One designed the entire 25-acre campus with the county’s comprehensive plan in mind and has donated land and resources to ensure the necessary road and infrastructure improvements.

“Traffic is top-of-mind for us all,” said Barry Mark, vice president of workplace solutions for Capital One. “It’s important that we get the transportation approach right for all of us who will live, work and commute in the community.”

In addition to its assistance with the Jones Branch Connector (a new link between Jones Branch Drive across the Beltway to Route 123), Capital One is doing everything possible to encourage its employees to seek alternate transportation options to help alleviate the impact the project could have on traffic in Tysons: offering shuttles for employees to travel from one office location to another, and encouraging use of the Metro and carpooling.

According to Mark, the overarching idea of the redeveloped headquarters is to enhance work-life balance for employees by creating an entire walkable community surrounding the headquarters tower and associated office buildings and co-locating the company’s 7,000 local employees on one campus. Removing the need for workers to commute for work or for personal activities will not only have a positive impact on the employees and their families but also for those they would be sharing the roads with.

“By providing for housing, recreation, retail, transportation improvements and continued reinvestment in our community, our development will create the most exciting and vibrant live-work-play environment in the region,” said Mark.

“The project will have a major positive impact on the Tysons area,” said Michael Forehand, senior vice president of government and public affairs for the Northern Virginia Chamber of Commerce. “It’s becoming less of a place that people come to at 9 a.m. and leave promptly at 5 p.m., and more of a work-play destination.”

Forehand added that he sees the project as a commercial hub that Fairfax County and all of Northern Virginia can be proud of.

“They are attracting young tech workers to Northern Virginia,” he said, “and giving the area a reputation across the nation that says that Northern Virginia is a place of innovation where large corporations want to invest and locate.”

Gordon made a similar observation, noting that the combination of the Metro’s new Silver Line and all of the amenities that Capital One is building for the benefit of both its employees and local residents gives the Tysons area the ability to better attract “a younger workforce.”

In addition to the road and infrastructure improvements and the office tower and buildings, the Capital One headquarters project will include an apartment complex and fitness center for the exclusive use of its employees, parks and outdoor amenities that it will open to the public, an events center that will be made available for county use, and several restaurant and retail “anchors.”

Commitments from some of those anchors have already been solidified: City Works (a classic American bistro), Davio’s (a Northern Italian-style restaurant), Starbucks, and the ever-popular Wegmans.

While discussing how Capital One has designed this project to bring part of the county’s vision, as stated in its comprehensive plan, to life, Chairman Bulova commented, “Capital One has been a leader in demonstrating how well that can happen,” and expressed hope that the effect of this project will inspire other corporate neighbors to follow suit.

Gordon noted another advantage of having large corporate headquarters, like Capital One, in the region. “They fill a large amount of philanthropic needs,” he said. “They’re not just giving dollars, they’re generously giving their time as well.”

The Capital One headquarters is located in the northeast quadrant of the I-495 and Route 123 interchange, adjacent to the McLean Metro station. When completed, Capital One will relocate its current local workforce of 7,000 employees into the headquarters, which has a capacity for 8,500 workers to accommodate the firm’s long-term growth expectations.

Phase 2: The next phase of construction is on Block C, and includes:

A 1.5-acre Sky Park on top of the podium, which will be open for public use. The park will feature an amphitheater, a large multipurpose lawn, a sculpture garden and recreational games.

Capital One is constructing a corporate hotel on one of the three building sites atop the podium. The remaining two buildings will be developed based on future need.

Phase 3: As Capital One builds out its office tower on Block B, it continues to plan for future employee growth. To accommodate this projected growth, Phase 3 includes:

Proposed development of a single office building consisting of two towers joined together by an atrium, with ground-floor retail on Block A. When ultimately constructed, this building will be approximately 850,000 square feet of office and 36,000 square feet of retail.

Capital One expects to break ground on this building in early 2019 and will begin occupancy in Q1 2023.

Age is just a number! These celebrity couples have BIG age gaps

‘The Flash’: Armageddon Arrives, Plus How Much From 2031 Might Come True? (RECAP)