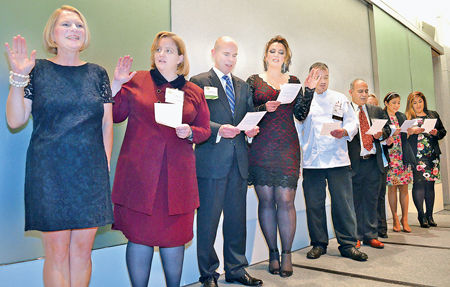 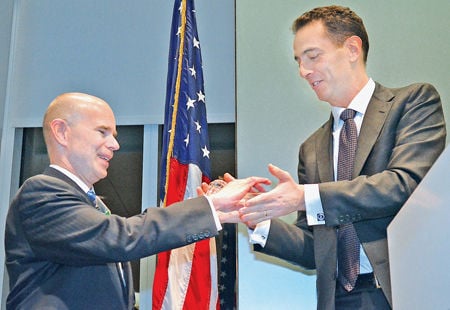 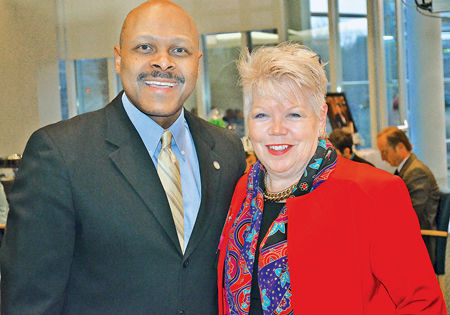 The Greater McLean Chamber of Commerce swore in its 2015 board members March 12 and received a pep talk from the state’s top economic-development official.

One of Simon’s key goals is to create more opportunities for members to collaborate and magnify what otherwise would be small projects.

“Everything we do together, we can all take credit for,” said Simon, who also is a Democrat representing the 53rd District in the House of Delegates.

Simon presented John Brough of Chain Bridge Bank with a crystal gavel to honor his service as the chamber’s 2014 chairman.

Simon then swore in the 2015 board, officers of which included first vice-chairman Karen Briscoe of HBC Realty Group, Keller Williams Realty; second vice-chairman Bailey Hopple Edelson of JBG Cos.; treasurer Sallye Williams of Ross, Langan & McKendree LLP; secretary Marnette Myers of Frank & Co. Brough will remain on the board as immediate past chair.

The keynote speaker, Virginia Secretary of Commerce and Trade Maurice Jones, focused on a central theme of his office: diversifying Virginia’s economy and making it less dependent upon governmental spending and related contracting.

Virginia needs to improve its roads, bolster the attractiveness of Washington Dulles International Airport, extend high-speed broadband service to under-served localities, enhance job-certification programs and make the state the nation’s most attractive place for starting a business, he said.

Jones ruefully told of attending a technology start-up event in Austin, Texas, and meeting a young entrepreneur who said she was from Arlington – Virginia, not Texas.

“I don’t want any young person to think they have to leave Virginia to realize their entrepreneurial aspirations,” Jones said.

Future economic success will depend on proactive steps, not the invisible hand of the market, the secretary said. If Virginia lets the market run its course, “North Carolina, Maryland, Tennessee, Georgia and West Virginia will send me thank-you notes,” he said.

Teamwork also will be critical to the commonwealth’s future success, Jones said. The secretary related how one corporate executive, who just had closed a business-relocation deal with the McAuliffe administration, said he was impressed by how seamlessly various players in Virginia’s delegation worked together.

“At the end of the day, it’s the high-functioning team that wins nine times out of 10,” he said.