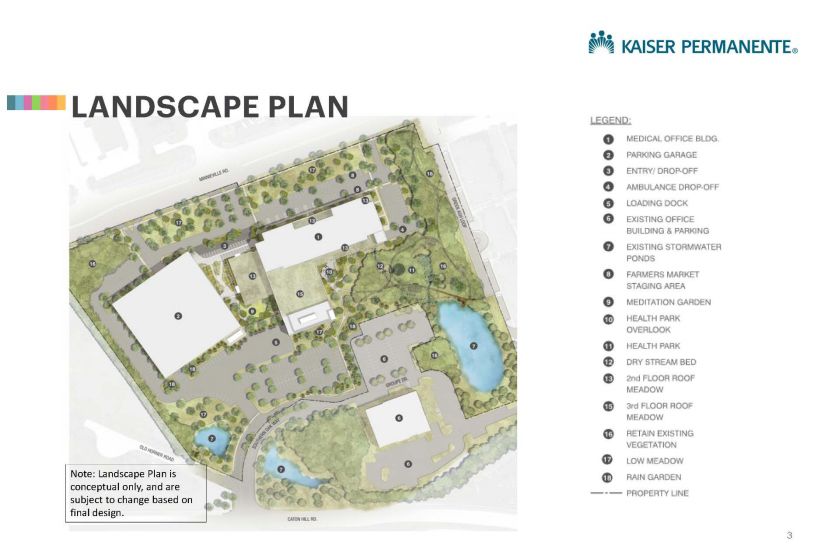 The new Kaiser Permanente medical hub planned in Woodbridge will receive a public hearing before the Prince William Board of County Supervisors on March 19.

The building and parking garage planned at 13285 Minnieville Road is expected to add some 185 jobs to those currently working at the existing facility at Potomac Mills.

The new building will be up to six stories tall and the 1,000-space parking garage is expected to have seven levels, with one underground.

The site is expected to include a conference center with four rooms available for public use after hours, and there will be a “health park” with medication areas and amenities available to the public.

Woodbridge resident Eileen Sheridan, who lives nearby, told the planning commission that she was happy that Kaiser was coming to the large, vacant lot on Minnieville.

“I just want to point out the size of this Kaiser facility, compared to anything that is on Minnieville Road now,” Sheridan said.

The sign promoting Potomac Mills mall along Interstate 95 will have a new design, according to a permit application to Prince William County. …

The 7-Eleven at 1551 Featherstone Road was repaired after a car struck the building.

Construction for new age-restricted housing was permitted at Belmont Bay. The four-story building will have 124 units, as well as a bank and a salon.

Renovations were also permitted at the Sentara Oncology Resource Center on Opitz Boulevard and the Department of Motor Vehicles on Caton Hill Road.

Le Cake Boutique received permits for its space at Stonebridge at Potomac Town Center and Wayback Burger secured sign permits for its long-awaited new building on Opitz Boulevard. And Woodbridge Soccer has a sign permit for a storefront at 14560 Potomac Mills.

Owners of a Shell service station at the corner of Dale Boulevard and Gideon Drive are seeking permits for an extreme makeover.

A ‘Bosch’ Spinoff Is Coming to IMDb TV — Who’s Returning From the Original Series?

Liam Payne: Robbie Williams and I are similar