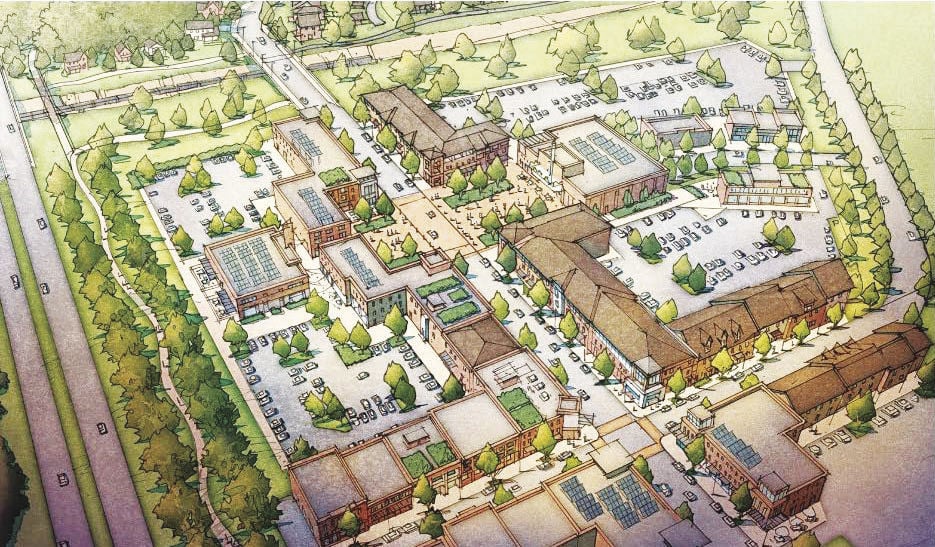 An example provided in the Independent Hill Small Area Plan of the type of village center that county planners envisioned at the heart of the community. 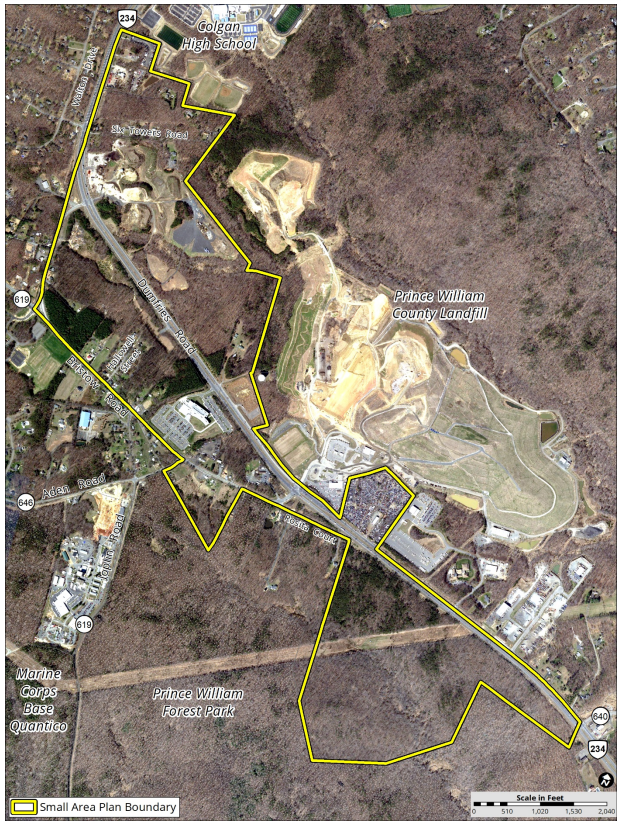 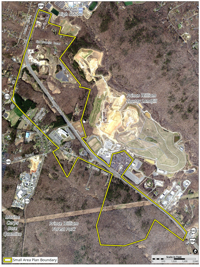 Independent Hill, a sleepy area off Dumfries Road, appears ripe for future development, and county planners are trying to get ahead of development to shape a unique vision for the area that would set it up for success.

Planners pitched a draft proposal for the Independent Hill Small Area Plan to the planning commission and community stakeholders this summer — a plan for a pedestrian-friendly village and an employment center with neighborhood businesses and a variety of housing.

They’ll be taking another look at the proposal to address input from the public and the planning commission, said Rebecca Horner, the county’s planning director.

The commission had planned to review a draft of the proposal in November, but Horner said staff will be requesting a deferral to a later date to incorporate more stakeholder input.

After the planning commission considers the proposal, it will move on to the Prince William Board of County Supervisors to consider. There is no tentative date for when the proposal will head to county supervisors, Horner said.

“The small area plan is an opportunity to build a community that promotes economic development while creating a dynamic multi-faceted home for the residents of Independent Hill,” according to a staff presentation.

The county began initiating several small area plans at the direction of the Board of County Supervisors in 2016, including North Woodbridge, the Parkway Employment Center, U.S. Route 29, Innovation Park, Triangle, Yorkshire, the county fairgrounds and Dale City.

Independent Hill includes 564 acres of land in the Coles and Potomac districts. Dumfries Road cuts through the area, which is south of Colgan High, south of the Prince William County Landfill, and north of Prince William Forest Park and Marine Corps Base Quantico.

Currently, Independent Hill is defined as a flexible use employment center in the comprehensive plan, Horner said.

A flexible use employment center aims to create campus-style parks where businesses can set up shop. The classification’s primary uses include light manufacturing, start-up businesses, small assembly businesses and office uses, including Prince William County agency buildings, while retail businesses would comprise no more than 25%.

The draft plan for the area would create a mixed-use “village center” in the area near the school division’s Kelly Leadership Center. A building could be built up to 5 stories with retail on the ground floor.

The area would also be an option for more public facilities and offices.

Planning staff held public meetings on the proposal in May and the planning commission discussed the proposal at its Aug. 7 meeting.

Some planning commission members said the proposal is too dense in terms of development. One member noted that the village proposal was a cool concept, but wondered if this was the right location.

The entire area would also see a series of parks and environmental assets.

Samsky’s Market to stay open after fighting for permit

Samsky’s Market in Manassas will stay open after the owner fought to keep a permit to sell fresh food.

cuz it worked so well in stone ridge, manassas city, and outside of woodbridge nvcc... oh wait.

Are these Prince William planners the same people that flooded our county with enough immigrants to shift the population from a majority of American born citizens that embraced conservative politics into a county with a majority of minorities that are solid blue liberals?

So it happens that in life some people like to live in the valley, others like to live half way up the side of a hill and others want to live on the very top of the mountain. To each of these people their idea of success happens when they get to make their own decisions of how, when, where and why they live. No single elevation is right no single elevation is wrong for all three levels. How is it today that Prince William planners up and became the ultimate deciders of all these considerations that all people should live by? No you can't live over there. No you're not permitted to build that. You can't serve sandwiches unless we say so. What do you think you're doing?

I notice that several opt-in comments mention that there are new and old buildings and shopping centers sitting empty all over the county. Some were built several years ago and are still sitting completely unoccupied. Now Prince William planners have decided that we need a bunch more. Why? There has to be some sort of rogue money making thing going on here? Could this also explain why the county has approved the construction of more huge “self” storage centers than there are 7-Elevens?

Prince William planners say that this sleepy area appears ripe for future development and they're trying to stay ahead of it to shape a unique vision. Is this an oxymoronic statement or just a faux-fancy way of saying we the planners are going to rip you sleepyhead people off?

The Prince William planners jackpot question is is it ripe enough or not? For the answer you have to go all the way down to the end of this article to where it says some planners think that the proposal is too dense in terms of development. Really?

Looking back at then and around prince William County now if the Prince William planners decide that their grand illustrious plans for Independent Hill are too dense it will be the first such decision they have made in the last forty years. And there is not a single cool concept nor right location anywhere in that nightmare.

And the award for most rambling comment of the day goes to....

Hey listen at least I don't spend a good chunk of my week rambling about immigrants, and how non-white people have ruined "my" county. I'm willing to bet you couldn't go even two weeks without commenting here.

Not saying you don't have the right to whine about the invasion of those pesky darkies on every other article posted here just questioning the point. And yes I don't disagree with some of your points I think we need to plan our growth better, and not just let unencumbered sprawl to take over the county, and destroy the rural crescent.

InsideCommenter: You should have quit while you were ahead instead of burning the midnight oil. Score ME=2 YOU=0

The fact that you admit to agreeing with some of my points is great. But you need to work on the whining end of the stick a little more.

First I could care less what color anyone is. The same God that made them made me and you. Second I'm not even trying to address the “times have changed” aspect which says that Americans should welcome massive numbers of non-giving takers from all over the world either. By the way that kind of view is what caused slightly over 63 million voters to elect Donald Trump in 2016. And from the way things look now the liberals have no clue how much they have whizzed off the American people since 2016.

The point I've tried to get across isn't complicated. Simply it's flabbergasting how fast that Prince William County's elected leaders switched from agreeing with the voters that were furious about the influx of immigrants coming into our county to saying, “Wow we're so pleased with ourselves” that we made Prince William County the first minority majority county in good old blue Virginia. That and not so much as a whimper since from the liberal mainstream media, the Democrats and a large portion of the Republicans.

So if you agree with this explanation I would say that we are very close to becoming a team that could working on educating some of the other zipper-heads that post in the two local forums right along.

Usually I’m all for new developments, a YIMBY, but this is a terrible location. It’s just unmarketable, non-transit oriented, daydreaming.

Have to agree with you I'm of the opinion that the vast majority of new development should be near public transportation/ closer to destinations for shopping and jobs, and denser with more focus on townhomes, apartments, and condos in those areas. One way to achieve this is to have mixed use zoning. With all these strip malls across the region empty and destitute more of this crap doesn't solve anything and doesn't add anything of value.

There it is. That's why they were trying to shut down Samsky's Market.

I understand the term “progress” but aren’t there already enough empty commercial sites that need to be utilized first? It seems as though there is little comprehensive planning involved at all. It feels like we’re just engaging in more sprawl. Yes. We do need to leave a few trees, as well.

OH NO here we go again.......not another residential/commercial development. Still reeling over the prospect of the one they want on the PW Parkway near Liberia and the one at Minnieville and PW Parkway with ALL the traffic congestion we already have and NOW they want to 'pick on' quiet ruralurbia Independent Hill . Can't we leave trees and such greenspace ALONE just once. We have enough commercial and residential in this part of the county as it is.

Forgot to say there are empty stores in so shopping centers so what is the logic for building spaces for more stores to default or move. Its just ludicrous. We have ENOUGH choices to live and shop as it is!

Katharine McPhee: Breastfeeding has been easy so far!

Demi Lovato: I still struggle with my eating disorder daily